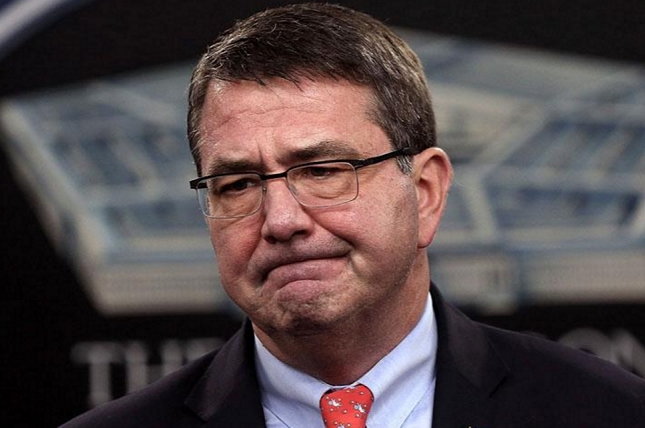 David Smith in Washington and Spencer Ackerman in New York

The Islamic State group’s second-in-command has been killed in a US raid in Syria, defence secretary Ash Carter has announced.

Abd al-Rahman Mustafa al-Qaduli had been a high-profile target. The US Department of State had offered a $7m reward for information on him – the most for any Isis leader apart from Abu Bakr al-Baghdadi, who is valued at $10m.

“I’m not going to say where or how it was done,” Carter told a press conference at the Pentagon. “I’m simply not going to do that. It is consistent with our strategy there which is to put pressure on Isil every single way we can, from the leadership right down to local supporting forces on the ground.”

The first was Omar al-Shishani, known as “Omar the Chechen”– who died after suffering injuries in a US-led coalition strike in north-eastern Syria.

Carter could not confirm whether Qaduli had any connection to this week’sterrorist attacks in Brussels, but said he and others had been part of the “apparatus of Isil” to recruit and motivate foreign fighters.

CNN reported that Qaduli was born in Mosul in Iraq in either 1957 or 1959. He initially joined al-Qaida in Iraq in 2004, serving as a top deputy to then-leader Abu Musab al-Zarqawi and emir of the group’s branch in Mosul.

He was captured and jailed by Iraqi authorities but was released in 2012, at which point he rejoined the group in Syria, according to the US Department of State.

At the same briefing, the Pentagon leadership appeared to contradict previous comments about a new US marine base in Iraq and indicated that it anticipated a wave of US escalation of the war this spring.

The chairman of the joint chiefs of staff, Marine General Joseph Dunford, said that marines at Fire Base Bell near Makhmour in northern Iraq had provided artillery fires for the forward advance of Iraqi forces as they prepare for a pivotal fight to retake Mosul, Iraq’s second city, from Isis.

Yet earlier this week, the spokesman for the US war command, Colonel Steve Warren, portrayed the purpose of the few hundred marines at the base as providing “force protection” for Iraqi forces and their US advisers if they come under attack from Isis, not offensive operations.

Isis rockets killed a US marine at the newly established outpost, the first US fire base of the war independent from Iraqi bases, over the weekend.

Dunford portrayed the artillery barrage as a trivial escalation, saying there was “no inconsistency between what this artillery unit did and what our aviation support does every day” in striking Isis from the air.

But Dunford and his boss, Carter, indicated that the US is likely to step up its involvement in the conflict.

They have provided Barack Obama with a palette of expanded military options, to include what Dunford called an “increase to US forces”, that they said Obama will decide on authorizing in the coming weeks.

The purpose of the escalation will be to support the Iraqi-led recapture of Mosul, although senior US officials, including the head of military intelligence, have doubted the Iraqi’s ability to take the city in 2016.