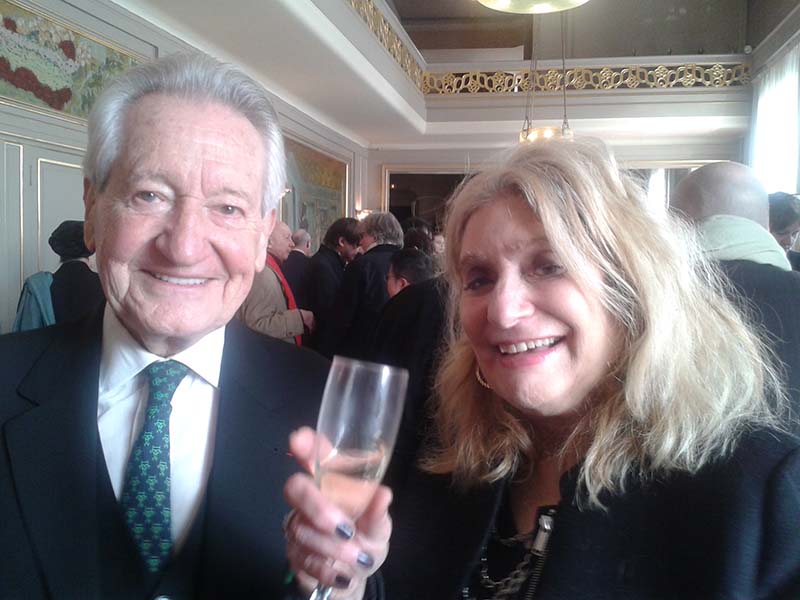 On March 11, 2016 le prix de brigadier (prize of the brigadier) was presented at La Comedie des Champs-Elysées. The prize  is one of the oldest  in the theatre business, as it was founded in 1960 by l’Association de la Régie Théâtrical (A.R.T.)  It is given for a theatrical event during the season  to an author, actor, producer  or even a technician. The prize itself it a piece of wood from the theatre with which, in olden days, was used by a man, called a brigadier in French, to tap several times to announce the rising of the curtain for the play. It is tapped twice – three  taps for the Prix de Brigadier and once – three taps for the Brigadier d’honneur. The Prix de Brigadier is a piece of wood like a long stick, decorated in red velvet, golden screws and having a plaque in copper engraved with the name of the recipient. It also has the name of the association presenting it. It was the A.R.T. founded in 1911 and is also the city of Paris and the Association pour le soutien(support ) du Théâtre Privé (private theatre). A prize winner can receive the prize only once.

The audience of those in the theatrical industry and journalists  waited to hear who the winners would be.

Onstage to introduce the ceremonies were Danielle Mathieu, of A.R.T. and Marie-France Migani, president of the Association pour le Soutien du Théâtre Privé. They thanked the members of the jury who met on November 12, 2015 to select the winners. Mr. Bruno Jullliard, the assistant to the mayor of Paris spoke a few words and then after a great applause from the audience presented the prizes.

Michel Fau, a famous actor and producer in “Un amour qui ne finit pas( A love that does not finish)” by André Russin played in Théâtre Montansier and in Théâtre de l’Oeuvre and who played in “ Fleur de Cactus” by Pierre Barillet et Jean-Pierre Grédy in Théâtre Antoine-Sione Berriau, won the Prix du Brigadier 2015. He was very honored to receive the prize. He  tapped  three times three taps and  then received a standing ovation.

Jacques Sereys , sociétaire honoraire (honorary stockholder) of the Comedie Française  won the Brigadier d’honeur 2015 for his outstanding career. He was a comedian entertaining us with his memories of how he wanted to go to the theatre academy in his native town of Marseille. Finally he got in. Then he came to Paris to study theatre. He went with some friends to the Louvre and the three of them were the only ones in the museum. Jacques was honored to receive the Brigadier and tapped three times. He received a standing ovation.

After the presentations, we were invited to a cocktail party . I met  Michel Fau, Jacques Sereys and Bruno Julliard. Pierre Pesquet who is starring with Michel Losdale an actor from Great Britain invited me to attend his play called “ Entre Ciel et Terre”. I also met Celine Tolosa who worked in the theater industry and Clara Braincourt who is a singer. It was great being at the Prix de Brigadaire and seeing so many in the theater industry.