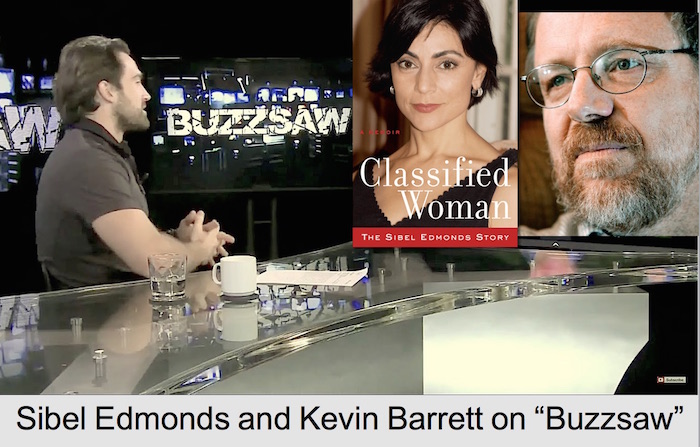 What just happened in Brussels?

To find out, Sean Stone, host of Buzzsaw, called on Sibel Edmonds and yours truly.

Sibel and I have both garnered a lot of mainstream media coverage. But whereas I was vilified by Fox News and witch-hunted by the neocons, Sibel was lionized by the liberal media … until she started telling the truth more forthrightly than they could handle.

Today, Sibel and I are pretty much on the same page. We both view the wave of terror in Europe as a false flag Gladio B operation. (For details, check out my edited books We Are NOT Charlie Hebdo and ANOTHER French False Flag.)

Sibel Edmonds is editor and publisher of Boiling Frogs Post, founder and president of the National Security Whistleblowers Coalition (NSWBC), and author of the acclaimed book Classified Woman: The Sibel Edmonds Story, and a Political Spy Thriller, The Lone Gladio. She has appeared on national radio and TV as a commentator on matters related to whistleblowers, national security, and excessive secrecy & classification, and has been featured on CBS 60 Minutes, CNN, MSNBC, NPR, and in the New York Times, Washington Post, Vanity Fair, The American Conservative, and others.

PEN American Center awarded Ms. Edmonds the 2006 PEN/Newman’s Own First Amendment Award for her “commitment to preserving the free flow of information in the United States in a time of growing international isolation and increasing government secrecy”. She is also the recipient of the 2004 Sam Adams Foundation Award.

Ms. Edmonds worked as a language specialist for the FBI’s Washington Field Office. During her work with the bureau, she discovered and reported serious acts of security breaches, cover-ups, and intentional blocking of intelligence that had national security implications. After she reported these acts to FBI management, she was retaliated against and ultimately fired in March 2002. Since that time, court proceedings on her issues have been blocked by the assertion of “State Secrets Privilege”, and the Congress of the United States has been gagged and prevented from any discussion of her case through retroactive re-classification issued by the Department of Justice.