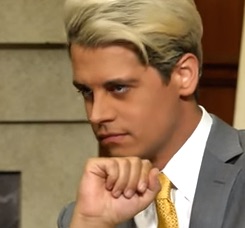 Milo Yiannopoulos doesn’t like Islam or Muslims. He doesn’t want them in Europe.

Like the Hasbra merchants, Yiannopoulos performs at zero capacity in historical thinking. Like the Zionists, for Yiannopoulos the ‘problem’ starts when he identifies himself as a victim. “As a gay man I am terrified by the mass immigration of Muslims into Europe,” he declares.

I wonder, is he also troubled as ‘a gay man’ that our Western governments have been throwing bombs on Muslims that have killed millions of innocent people? As a ‘supporter of the Iraq war,’ can’t Yiannopoulos figure out that we have, once again, brought this wave of terror on ourselves? Isn’t the tidal wave of Muslims migrating to Europe the outcome of Western imperial wars? We have been wiping out Arab countries one after the other.

“Why are we surprised that Muslims blow thing up, this is what they do,” Yiannopoulos says. Really? Were Muslims in Syria or Iraq blowing things up before they faced the lethal reality of Zionised imperialism? Were the Palestinians blowing themselves up before they met with the reality of the Jewish racist state?

Unlike the polite Zio-cons who sketch a deceptive demarcation between ‘kosher Muslims’ and ‘evil Islamism,’ Yiannopoulos admits that he hates Muslims as a whole.  It is not Isis, he says. Something is “structurally wrong” in Islam, for instance, “there is no peace movement.”

Yiannopoulos is actually accusing the Muslims of failing to be Jews.  Jewish politics is exceptionally effective in forming and controlling the dissent to Jewish politics.  By doing so, Jewish political institutions take care of the dissent to different problematic cultural elements associated with Jews, Jewish politics and Jewish culture.  Muslims do not play the controlled opposition game. Muslims are largely impervious to ID politics.  Unlike Yiannopoulos who speaks ‘as a Gay,’ Muslims rarely speak ‘as Muslims’ because Islam is not a system of identification, it is a matter of belief.  Those who believe in Allah ‘are’ Muslims; they have no reason to identify ‘as’ Muslims. Believers see no reason to take responsibility for the actions of other believers.  Similarly, my friend Rabbi Yaakov Shapiro, sees no need ‘as a Jew’ to apologise for Israel’s actions. For him, Israel has nothing to do with his Judaism or his Judaic values.*

For Yiannopoulos,  Islam is incompatible with modern free liberal democracy and will “turn the clock back.”  Who is to blame? Yiannopoulos’ answer is emphatically simplistic and misleading: the “regressive Left.”  Not so. Hasn’t the Jewish ‘progressive Left’ been leading the pro immigration campaign for decades?  Wasn’t it the so-called ‘regressive leftists,’ the orthodox Marxists and Stalinists, who actually opposed cultural Marxism and ID politics realising that these social experiments were designed to divide the Working Class?

But Yiannopoulos is not totally wrong. He is apt in his criticism of cultural Marxists and their tyranny of correctness that promoted the delusional idea that by ‘shaping language you can suppress bigotry.’ Yiannopoulos himself proves how wrong this mantra is. Yiannopoulos operates as an ID politics merchant while spewing hatred towards Islam and Muslims. In the most self-contradictory manner he ends up claiming that civilised society is all about living with “one another despite prejudices and differences” yet, he continues, “we were doing a good job at that right up until we started to import Muslims.”  This is Yiannopoulos articulating the most banal form of the new Zio-con mantra. You should love the ‘Other,’ you must respect the ‘Other’ but make sure you let us decide first who the Other is. Yiannopoulos dehumanises Muslims. He speaks about them being ‘imported’ like commodities or products. This view of society has nothing to do with Western tolerance and values. It is a radical form of choosen-ism.

His vision of Western tolerance is phantasmic and historically inaccurate. It took the West more than a while to let women vote. It took the West a long time to open its heart to gays and their rights. Slavery is not yet over in the West, although it morphs constantly to hide its vile symptoms.

Shouldn’t Yiannopoulos give it a bit of time and dialectics to allow peace between West and East to prevail? After all it was we, the West, that declared a criminal war on Islam in the name of the War Against Terror.

* Of course, many other Orthodox Rabbis insist that Israel is the embodiment of the Judaic thought.