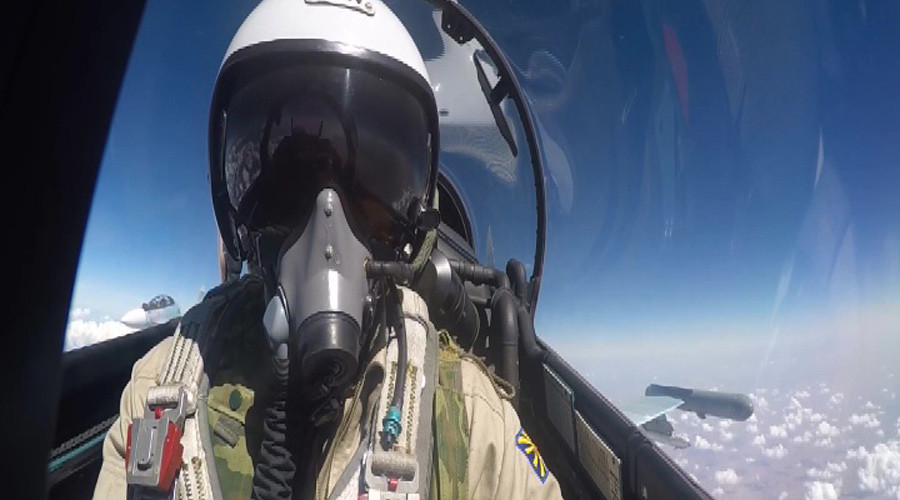 [ Editor’s Note: I should have expected Gordon might make the analogy of the Marine and Navy pilots fighting the good fight of the Cactus Air Force at Henderson Field, like the Russians have done from their small airfield in Syria. We like to stitch things together that may not be obvious, and where we have some personal experience.

They both came as a surprise to the enemy, and where pilots, crews and equipment were strained to the maximum to fly as many combat missions as possible to turn the tide — against the Japanese offensive in WWII, and 70 years later against the Western terrorist offensive on Syria.

Guadalcanal was a lot bloodier because Henderson was almost constantly under attack from Japanese bombing missions, night and day, big caliber naval shelling and eventually from Japanese ground artillery.

Naval squadron big guns destroyed almost all the planes several times, but reinforcements always arrived in the nick of time to keep daytime fighters flying to break up the late morning attacks on the airfield and supply ships.

The dive bombers flew mission after mission when major reinforcements were being shipped in. Destroying them on the water saved having to engage the tough Japanese troops on land in the brutal jungle combat. The Cactus Air Force saved the day many times when the Navy ships were not beating off the next invasion fleet, or the Marines on land fighting off night time banzai charges.

There was a high cost in pilots, not only from combat losses but the malaria, poor food, little sleep and fatigue that dulled a pilot’s sharpness  needed to make instant, and correct, decisions. Few were rescued that were shot down over water. Japanese pilots were decimated also, both in the carrier battles and from their land-based army pilots. It was the classic war of attrition.

America won because we produced more pilots quicker and switched to using wing man tactics, where new pilots covered the experienced ones’ tails, and we built better planes with armored cockpits and self-sealing gas tanks that the Japanese never had.

Japan lost the cream of its pilots in the Guadalcanal campaign and was never able to replace them. Russia has lost just one pilot in Syria, and that one in a shameful ambush by Turkey as a provocation. The Syrian coalition has been fighting the good fight, while we have not. Thank goodness that not many Americans have not had to die for it. There has been enough of that… Jim W. Dean ]

Russian pilots and planes flew more missions with less equipment than the US has done since the Cactus Air Force began operating out of Henderson Field on Guadalcanal in 1942.

Of course, the best pilots in the world had 15 years of continual warfare to train and get paid, on average, $10,000 per month compared to their Russian counterparts who get $500 per month and had two weeks to come up to speed.

Thus, the first bombing operations were sloppy, but by week two, not only had things tightened up, but considering Russia has a much higher level of intelligence sharing with both Iraq and Syria and a higher respect for human intelligence “on the ground,” Russia was hitting far higher quality targets than America ever has.

You see, despite good planes, even great planes, and we aren’t talking about the F35, the “flying garbage truck,” America’s corrupt military industrial complex uses the Air Force as a scam for bankrupting the US. The 400,000 man US Air Force, including reserve and National Guard units, with over 3000 “ready” combat aircraft, can still only run on average 8 sorties a day against ISIS, yet the American people pay $800 billion to do it.

It gets worse, far worse.

American troops on the ground, thus we aren’t talking about the “coalition” effort in Iraq and Syria, learned long ago not to depend on close air support. The Cactus Air Force, back in 1942 wrote the book on close air support, a book America had lost before the Vietnam War began.

Serving on the ground in Vietnam with a Marine Special Landing Team, I learned that air support was a dream, not a reality. We never saw planes, had no way of communicating with them, and to the United States Air Force, the real war on the ground was a distraction from their “big box war” of heavy bombers dumping thousands of tons of ordnance a day on empty fields and endless forests.

At one point in 1969, I watched from a mountain top outside DaNang while the US Air Force flew mission after mission, loading bombs, refueling, dropping bombs at the end of the runway, “rinse and repeat” like it says on the shampoo bottle, a scam to waste ammunition and stack up phony missions.

While supplies like food and ammunition never got to front line troops in Vietnam, all diverted to glory units like the Air Force command at “Gunfighter Village,” and while Marines starved or fought outnumbered, suffering the highest casualty levels in American history, it was air conditioning, hot and cold running, “female companions” and clean sheets, back at the Air Force base.

What we saw in Syria was Russia set up a forward command in days at a small airstrip, move in 4 dozen aircraft, invite media to watch the whole thing, and begin combat operations with an air force that hadn’t flown against an enemy in over 25 years.

We watched planes that cost nothing wipe out targets America had missed or overlooked or that, according to American pilots, they weren’t allowed to hit. American pilots can bomb, they have the experience, they have the equipment but for some reason, at least to each other and those they trust, they will tell you, against ISIS it has always been “hands off.”

Not so for Russia. For day after day, Russian pilots hit command posts, training camps, wiped out convoys Americans claimed they didn’t see, ammunition storage, and eventually the thousands and thousands of oil trucks American pilots had been begging to attack for months.

Yes, by world standards, American pilots are spoiled. When the American taxpayer buys breakfast for an American pilot flying over Afghanistan or Syria, that meal, costing on average $120, still is only milk, cereal and lousy coffee.

When American troops in Iraq drank unfiltered water pumped out of the Euphrates River by Halliburton Corporation at $8 per cup, ingesting human waste in high concentrations, we get a glimpse of why America’s military is not ready to push forward a hotter version of a new Cold War.

What isn’t reported is that the real Americans who fight wars admire their Russian counterparts and what they have done. American pilots wish they had been given the hot targets Russia destroyed instead of being forced to drop payloads of bombs on abandoned villages north of the Jordanian border, as a Russian command report outlined in November 2015.

When I think of what makes American pilots angry, I think of Senator Lindsey Graham of South Carolina. Graham and his close friend, John McCain are good friends of “moderate Syrian rebels” which, just by accident, seems to include both ISIS and al Nusra. Graham is also a colonel in the United States Air Force.

He can’t fly a plane and has no military experience to speak of. What was done is this. He was given a “billet” in the Air Force and quickly promoted to colonel over experienced combat pilots, one of which was forced to retire as a Lt. Colonel because Graham was given his place.

It isn’t just that Graham is an open homosexual, something many in the military deeply resent despite new policies.

It’s that Graham, like John McCain is not respected, even hated by the military, and both McCain and Graham are responsible for pushing America into losing wars, one after the other, while personally profiting through corruption and ties to narcotics trafficking, according to high level sources.

What the Russian Air Force proved is that the Russian military, should it be challenged by adventurism on behalf of the Kiev regime, perhaps a combined attack on Crimea as has been threatened, or a Turkish invasion of Syria, can, despite limitations, fight a conventional conflict with great effectiveness.

Having proven this, Russia may actually save the world from a war both Russia and America don’t want, something the settlement in Syria, a tremendous success of cooperation, has proven.