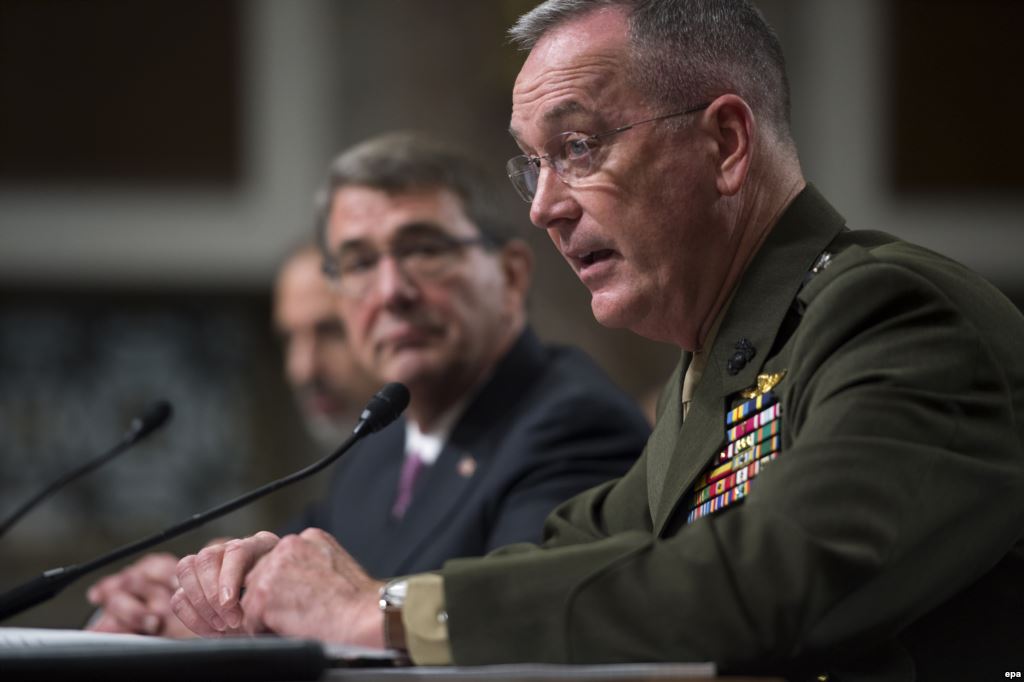 [ Editor’s Note: This is a strange article, written quite clearly as a Pentagon unilateral decision to reverse Obama troop pull downs in Europe, which is under no increased threat at all, as part of his shifting priorities of other foreign concerns like the Asia Pivot.

There is no mention of the White House being involved in these decisions. And even more strangely, we have our favorite “Cry Wolf” General Breedlove announcing the troop build up as he is leaving. We have had troops temporarily deployed to Europe for training exercises, so that was a substitute for having them permanently deployed.

The Joint Chiefs’ General Dunford does his expected “doom and gloom” pitch at the unnamed think tank talk about Russian aggression… all of it flagrantly untruthful, as it is nothing more than a long overdue modernization of the Russian military after major problems were revealed in the Georgian campaign.

What the US seems to be angry over is they may have foolishly expected that the Russian sanctions were going to choke off their modernization campaign, even after the US-backed violent coup in Ukraine. We see that not only is that not the case, but Russian arms sales continue to be strong around the world.

So many Americans might suspect our military brass of attempting to manipulate public support for the new bogus Russian strategic threat to replace the exposed Iranian nuclear threat hoax. The Russian threat hoax was used by the US to bail out of our major strategic arms agreement with the Russians to allow for moving our missile defense shield closer to their border.

Both generals perfectly understand that Russia’s defensive moves have been, and all future ones will be, the result of US aggressive moves, for which there has never been a real public airing of what has happened and why.

This is an ongoing fraud against the American people. Even the pitch for adding one more armored brigade is a charade. The Russians are not coming and everybody knows that.

That would require disclosure of material that has been withheld from the public because of the negative impact it would have on public trust of our military command structure and their growing multiple allegiances to the defense industry, the huge counter-terrorism outsourcing going on now, and their love affair for hyping security threats.

Americans deserve to be treated better, and that can start by purging the military from any involvement in training and logistics support for terrorist proxy forces, as the history clearly shows that has been a Pandora’s box of manufactured threats for purely criminal purposes… Jim W. Dean ]

The US military will keep three heavy army brigades in Europe on a continuous basis, reversing Barack Obama’s reduction of forces after concluding that Russian aggression poses an enduring threat to continental stability.

The shift in course is the latest in a series of small restorations of the military status quo before Obama, suggesting that senior officers have already begun to look past his presidency.

Shortly after Obama leaves office in 2017, the army presence in Europe will return to three armored brigades, with associated vehicles and artillery set for immediate restoration.

In 2012, the Obama administration removed two of the four army brigades long stationed in Europe, though after Vladimir Putin’s 2014 invasion and occupation of eastern and southern Ukraine, the military began bolstering its presence, particularly in eastern Europe.

Gen Phil Breedlove, the outgoing NATO military chief, announced the additional force presence as a critical step in reassuring European allies of a US military commitment that some have called into question.

“This army implementation plan continues to demonstrate our strong and balanced approach to reassuring our NATO allies and partners in the wake of an aggressive Russia in eastern Europe and elsewhere. This means our allies and partners will see more capability – they will see a more frequent presence of an armored brigade with more modernized equipment in their countries,” Breedlove said on Wednesday.

The announcement comes a day after the chairman of the joint chiefs of staff, Gen Joseph Dunford of the marine corps, cited Russia as one of his principal persistent security challenges and took note of bolstered Russian conventional and digital military capabilities that have recently matured.

The rearmament in Europe reverses a longstanding push in US defense circles to de-emphasize a continent once believed to be thoroughly stable. It also comes amid two political developments: the rise of Donald Trump, who has disparaged the NATO alliance as a drain on US resources, and the twilight of Obama, whose discomfort with ground troop deployments appears to pose less of a restriction to commanders.

Last week, Dunford and the defense secretary, Ashton Carter, openly predicted an imminent increase of US ground forces in Iraq and Syria – officially at 3,870 but functionally around 5,000 – before submitting their recommendations for a troop escalation to the White House.

The new commander of the Afghanistan war, Gen John Nicholson, has also voiced discomfort with the already-delayed troop drawdown Obama has ordered by the end of his presidency. Nicholson will soon issue a troop request to Obama, which Dunford signaled on Tuesday will reflect “fundamental changes” that the military considers necessary to avoid a repeat of Afghanistan’s bloody 2015.