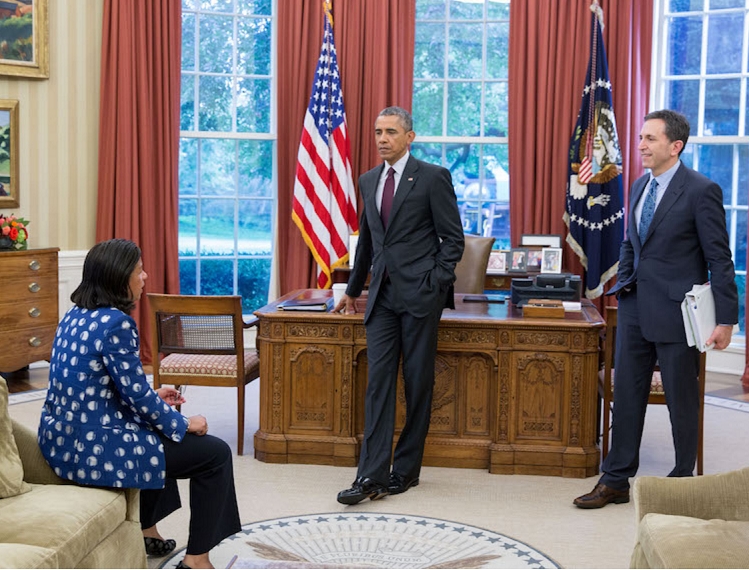 Who wouldn’t want to be White House Jewish liaison?

Matt Nosanchuk lasted nearly three years in a post — officially titled associate director of public engagement — that may be the apotheosis of thanklessness. He stepped down last week.

Notably, Nosanchuk wound it up with plenty of thanks from some of those who made clear their antipathy to the administration he represented.

One email said: “Matt. Best of luck. You were always gracious and a wonderful listener. Obama is fortunate to have you.”

That was from Morton Klein, the president of the Zionist Organization of America and one of the Obama administration’s most lacerating critics.

READ: The call of Washington lures a Clinton man to Kerry campaign

Klein confirmed he sent the missive, which JTA obtained independently of Nosanchuk or Klein.

“Matt always took my calls, returned my calls, he listened to my concerns and responded respectfully, obviously supporting Obama, that’s his job,” Klein said. “Obama was lucky to have him.”

Nosanchuk’s key to lasting longer than his predecessors?

It was his preternatural ability to listen without judgment, according to Rabbi Levi Shemtov, who directs American Friends of Lubavitch, Chabad’s office here.

“Matt’s biggest strength might just be his ability to listen to opinions beyond his own or that of the administration and appreciate their merits,” Shemtov said. “That’s probably why he was so widely respected during his tenure.”

It’s a skill that guided Nosanchuk, 50, who lives in the Maryland suburbs of Washington, D.C., through some of the most fraught years of a fraught relationship among the Obama administration, the Israeli government and some organized Jewish groups. He took flak both from the Jewish community and, occasionally, the administration officials to whom he would relay Jewish community concerns.

Nosanchuk led outreach to the Jewish community during the talks over the Iran nuclear deal, which the government of Israeli Prime Minister Benjamin Netanyahu and the American Israel Public Affairs Committee adamantly opposed, as well as the 2013-14 U.S.-brokered Israeli-Palestinian peace talks, which collapsed in recriminations among all sides.

Throughout, he maintained friendly relationships with the antagonists in those battles, testified by rare on-the-record praise from AIPAC and Ron Dermer, the Israeli ambassador to Washington. “The embassy enjoyed working with Matt, who also attended many of our events, and I wish him much success in the future,” Dermer told JTA in an email.

“We are grateful to Matt for his strong efforts to build the relationship between the administration and the pro-Israel community,” said Marshall Wittmann, AIPAC’s spokesman.

Nosanchuk would make a beeline for his adversaries in hopes of winning them over. At a recent conference of the Israeli-American Council, he sat at the same table as Sheldon Adelson — the council’s funder along with being a Republican kingmaker — and made pleasant small talk. Adelson, a casino magnate, had gone to great lengths in 2012 to stop President Barack Obama’s reelection.

In a biographical sketch he sent friends as he readied to leave, Nosanchuk listed near the top, “keeping lines of communication open with those in the community who are critical of” Obama. (Toward the end, he also lists “Emceed Kol HaOlam Jewish a cappella singing group competition.”)

Nosanchuk, a member of the Adat Shalom Reconstructionist Congregation in suburban Washington and a gay man, came to the job experienced in negotiating change in less than amenable environments. As a Justice Department official, he advocated for LGBT rights in the first Obama term, which evolved from agnosticism on same-sex marriage to full-throated support of marriage equality.

“When you are at the White House, it is very easy to shut the door and say we will not meet with people who do not agree with us,” said William Daroff, the Washington director of the Jewish Federations of North America. “The White House under Matt never shut the door. He made sure the Iran deal was in a silo, so those who disagreed on Iran could work with the administration on 99 other issues. His personality and relationships were such that that open door was always there.”

The JFNA did not take a position on the Iran deal, but many of its constituent agencies were opposed.

Nosanchuk’s modus operandi was to frame contentious issues in familiar, even homey settings. At the height of the Iran debate a year ago, Nosanchuk organized Obama’s speech at Adas Israel, a Washington synagogue. He also set up the president’s online address to the Jewish community during the Iran debate through the JFNA. In 2013, for the first time, a sukkah was in place for the vice president’s annual Jewish community reception.

A signal of the post-Iran deal reconciliation between Obama and Netanyahu – and Dermer, Netanyahu’s right-hand man – was the president’s Holocaust memorial address in January at the Israeli Embassy, also brokered by Nosanchuk.

Less noticed was a speech delivered the next day by Tony Blinken, the deputy secretary of state, to AIPAC’s luncheon for rabbis and cantors. Nosanchuk had a prominent hand in shaping its focus, which featured an almost seamless meld of Yiddishkeit and the typical strong Obama administration defense of its policies as being pro-Israel.

Blinken opened by joking about his bar mitzvah – “I can’t shake this feeling I have that I forgot to practice something” – and closed with references to the Jewish tradition of going out for Chinese food and a movie on Christmas. In between, Blinken argued that the Iran deal was producing results limiting Iran’s threat in the region, and listed the ways in which the Obama administration has maintained a robust security relationship with Israel.

Nosanchuk was adept, too, at that most dreaded of White House traditions among Jewish liaisons: organizing the annual Hanukkah party. Drawing up the invitation list – and fielding the anguished calls from the uninvited – is a protocol challenge of the first order. In fact, in the canned quote the White House media operation allowed him to release to JTA, Nosanchuk seems to take pride in the fact that under his watch, an extra Hanukkah party was added each year to handle the throngs.

“President Obama speaks often about the values that he and his entire administration share with the Jewish community, as well his deep connections to the community,” Nosanchuk said in the statement. “Over the past three years – or, as anyone holding this role measures it, six White House Hanukkah receptions – I have had the chance to work with incredible colleagues here at the White House and throughout the Administration, and with many individuals and organizations in the Jewish community, to put those values into action.”

Nosanchuk “will soon be moving to the State Department where he will continue his public engagement and outreach work, including with Jewish community leaders and organizations,” a White House official said. His successor has not been named publicly.