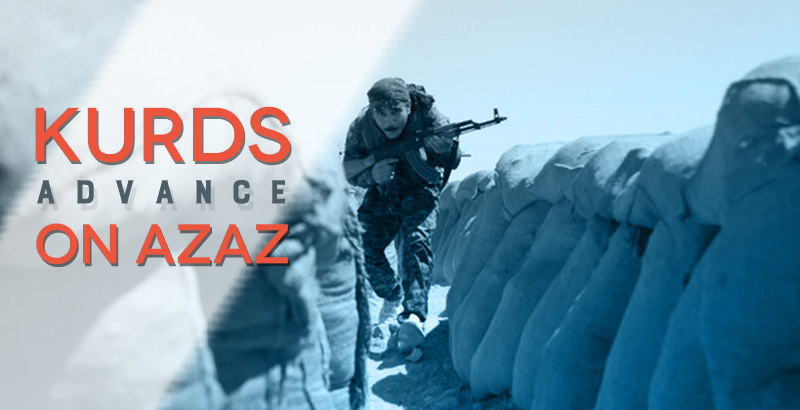 On Mar.29, the Syrian Democratic Forces, mostly Kurdish YPG units reportedly launched an offensive towards the town of Manbij in Northern Syria.

Neabwhile, Kurdish units captured the Al-Shat checkpoint and the Al-Kadi Villa near Azaz and attempted to advance to the town which remains one of the latest Al-Nusra-controlled logistical hubs used to receive supplies from Turkey. In turn, Al Nusra militants supported by the Free Syrian Army (FSA) launched a counter-offensive in the area. Pro-militant sources report about heavy casualties among the SDF. It’s confirmed that a Kurdish T72 battle tank has been destroyed with a TOW-missile. Now, heavy clashes are ongoing at the contested area near the town.

It’s also expected that al-Nusra and the FSA militants will be able to concentrate a major of their forces at the Azaz front because there is no threat of ISIS advance in the area. Turkish-, Qatari- and Saudi-backed groups have a kind of agreement dividing spheres of influence in Northern Syria.

On Mar.29, the Russian Defense Ministry reported that 50 Al Nusra militants and three vehicles loaded with ammunition crossed Turkey’s border into Syria. Those terrorists arrived the town of Anadan to help militant forces to threat Kurdish units in the Sheikh Maqsood neighborhood of Aleppo.

The Syrian Arab Army (SAA) supported by Russian warplanes and fighter helicopters is advancing on the town of al Salamiyah located on the important crossroads in the province of Hama. The army units are now in full control of several key areas and heights near the town. If Salamiyah is captured, the Syrian forces will be able to increase the safety of the vital M5 highway and, with recent gains in Palmyra, expand dramatically its logistic and freedom of manoeuvre. The advance on Al Quaryatayn pursues the same goal.