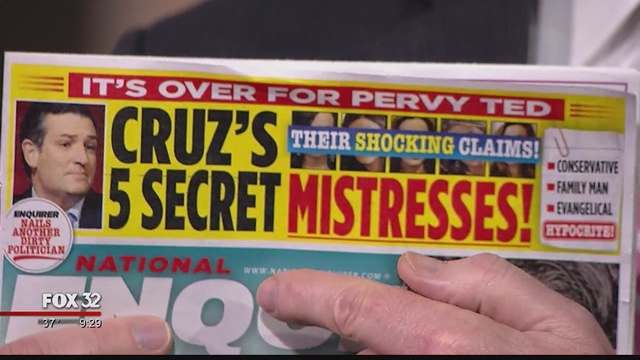 We all know that Ted Cruz is a puppet by now. We know that he and his wife are in the political business to please their bosses, namely, the Khazarian Mafia. Cruz’s political enterprise is just a charade and the poor man is just buying his time. The Neocons love him.[1] I can’t wait for him to say farewell to the presidential race. It will be good riddance for both parties.

But if you are familiar with fallacies in logic, if you understand terms such as contradiction, equivocation, begging the question, shifting the burden of proof, circular reasoning, genetic fallacy, and if your intended target is to uphold practical reason, then you are going to be confused in this sex culture. Moreover, if you have no patience with nonsense, then the sex culture will drive you nuts.

The sex culture continues to prove that Augustine was right all along: if you ignore Logos or morality, then you are going to end up copying it in a perverse way. For more than sixty years or so, the sex culture said ad nauseam that there is nothing wrong with hiring hookers and using them as sex machines. They call it freedom. We were constantly told that suppressing sexual impulses and appetites is a mental disorder.

“awaken…a desire in modern youth, a desire for a new philosophy and for scientific knowledge about the fight for sexual health, sexual consciousness, and freedom…It is the youth that matters!”

Reich does not stop here. He moves on to argue that

“If we could once succeed in engaging the sexual interests of children and adolescents on a mass scale, then reactionary contamination would be faced with a tremendous counterforce—and political reaction would be powerless.

“The mechanism that makes masses of people incapable of freedom is the social suppression of genital sexuality in small children, adolescents, and adults.”

In 2000, Jewish pornographer Nina Hartley advanced Reich’s thesis in an indirect way by saying that that she wanted everyone to have “a piece of sex, a piece of the means of production, a piece of warm communist community, and a piece of the promised Messianic Age—now.”[3]

Was Hartley ever challenged to retract that statement? Is Daniel Cohn-Bendit right in defending pedophilia in texts like The Great Bazaar?[4] Has Reich been condemned in academic circles in the United States? Of course not.

But the question is this: if everyone ought to have “a piece of sex,” including unnatural sex, why not Cruz? Why should he suppress his sexual needs? What makes the sex culture so discriminatory? Don’t they believe in “diversity”? Why can’t they use a little bit of it here? If the sex culture is right about Cruz, then what was Timothy Leary’s “Turn on, tune in, and drop out” all about?

“Ted Cruz is having sex with hookers?,” says the culture. “That’s an unpardonable sin. He is to be put on trial and condemned as a wicked person.”

So, it is morally wrong to have sex with hookers after all. It is wrong to be involved in extramarital affairs, and this is indirectly coming from the National Inquirer!

Many people cannot see that vital contradiction because they are morally and intellectually blind. This reminds me of a man who was giving a lecture at a major university in the United States. After his talk, an irate lady walked to the microphone and asked, “You’ve talk quite long about how things ought to be coherent. Who says that everything has to be coherent?” The lecturer calmly responded, “Do you want me to give you a coherent answer or an incoherent one?”

If morality does not exist, which is what the culture has taught for years, then Cruz hasn’t done anything wrong. Sex machines and propaganda like the National Inquirer cannot explain that contradiction because their feet are firmly planted in midair.

If you think that morality is an illusion or that there are no absolutes (a self-defeating statement), then don’t even attempt to condemn Cruz and call yourself an honest person. I would even hasten to say that if you are not serious about trying to understand metaphysical issues, then don’t even try to crack-open a book by people like Kant and Hegel because they will philosophically ruin your ideological substratum.

I honestly had a good laugh when the Daily Mail—the Daily Mail!—was pressuring Cruz to answer the question whether he has been faithful to his wife.[6] If you are not familiar with the Daily Mail, just go into their website and you will be bombarded with sex pictures and titles in a matter of seconds.

Here are some current heading titles: “Sex on the Beach”; “Geordie Shore’s latest star Chantelle Connelly leaves little to the imagination in a flesh-coloured criss-cross swimsuit for the beach”; Ex On The Beach star Chloe Goodman flaunts her ample assets in a sexy neon zip-up bikini as she soaks up the sun in Lanzarote”; “Sun-kissed Olympia Valance shows off her sensational frame as she strips down to skimpy bikini during idyllic Indonesian vacation”; “Kourtney Kardashian shows off slim figure in black lingerie as she poses suggestively with legs open for daring selfie”; “Geordie Shore’s Sophie Kasaei slips into a racy lace body-suit and thigh-high leather boots for sexy new photo shoot.”

You get the point. Cruz should have asked the Daily Mail reporter, “Let’s suppose that I did sleep with those hookers. Was the act wrong?” Asking that provoking question would have completely shot down the entire sex industry and much of the Daily Mail’s daily enterprise.

I am not letting Cruz off the hook here. What I am saying is that the culture does not have a metaphysical leg to stand on. Proponents of the sexual revolution and their propaganda ministry (media and Hollywood) are morally and intellectually empty. Perhaps they need to start reading Augustine or G. K. Chesterton. Chesterton put it well when he said:

“For all denunciation implies a moral doctrine of some kind; and the modern revolutionist doubts not only the institution he denounces, but the doctrine by which he denounces it…

“As a politician, he will cry out that war is a waste of life, and then, as a philosopher, that all life is a waste of time. A Russian pessimist will denounce a policeman for killing a peasant, and then prove by the highest philosophical principles that the peasant ought to have killed himself. A man denounces marriage as a lie, and then denounces aristocratic profligates for treating it as a lie.

“He calls a flag a bauble, and then blames the oppressors of Poland or Ireland because they take away that bauble. The man of this school goes first to a political meeting, where he complains that savages are treated as if they were beasts; then he takes his hat and umbrella and goes to a scientific meeting, where he proves that they practically are beasts.

“Therefore the modern man in revolt has become practically useless for all purposes of revolt. By rebelling against everything, he has lost his right to rebel against anything.”[7]

[2] E. Michael Jones has done an excellent job dissecting Reich’s “sex-economy” (Reich’s own term) in Libido Dominandi and The Catholic Church and the Cultural Revolution.

[6] “Ted Cruz dodges question about whether he’s ‘always been faithful’ to his wife as endorser Carly Fiorina leaps in to insist a declaration that he’s not an adulterer is a ‘dance to Donald Trump’s tune,’” Daily Mail, March 28, 2016.