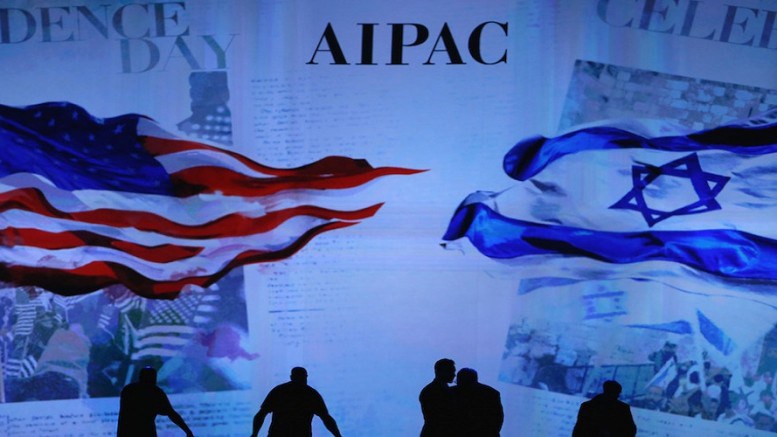 Once again the AIPAC annual pantomime in Washington DC has played itself out while the world outside watches aghast at the gullibility of America’s political elite. And how they flocked to hear the Israeli prime minister Binyamin Netanyahu’s speech.

Whatever happened to the Un-American Activities Committee set up to investigate disloyalty and subversive activities on the part of private citizens and public employees, one wonders?

“The terrorists have no resolvable grievances. It’s not as if we could offer them Brussels or Istanbul, or California or even the West Bank,” said Netanyahu. “That won’t satisfy their grievances because what they seek is our utter destruction and their total domination. Their basic demand is that we should simply disappear.”

Funny, the Israelis have been working for nearly 70 years to make the Palestinians disappear. Domination is their specialty.

“The only way to defeat these terrorists is to join together and fight them together… with political unity and with moral clarity. I think we have that in abundance….” Achingly funny.

“The chain of attacks from Paris to San Bernardino to Istanbul to the Ivory Coast and now to Brussels, and the daily attacks to Israel… This is one continuous assault on all of us.” No it isn’t.

And who is this “we”? It’s Netanyahu’s endless attempt to push the old ‘hasbara’ line to make us think we’re all in it together.

A few years back ‘The Israel Project’, a US media advocacy group, produced a revised training manual to help the worldwide Zionist movement win the propaganda war, keep their ill-gotten territorial gains in Palestine and persuade international audiences to accept that their crimes are necessary and conform to “shared values” between Israel and the civilised West.

Note how Israel’s strategy is almost totally dependent on the false idea that they are victims of terror and western nations need to huddle together with Israel for mutual protection.

If so fluent in this language, why won’t Israel acknowledge their neighbours’ rights to democracy, freedom, security and peace and end their military oppression? Level-headed people have begun to realize who the terrorists really are. And it is obvious by now that allowing parallels to be drawn between Israel and America only serves to increase the world’s hatred of America.

The only people who are interested these days are the ‘Friends’ and the other assorted stooges in thrall to the Israelis and the politicians they have bribed.

Is democracy a shared value? Around Western nations, maybe. But Israel is an ethnocracy and a rather nasty one. Is freedom a shared value? The world is still waiting for Israel to allow the Palestinians their freedom after decades of brutal military occupation.

As La Clinton and others perform their obscene ritual acts of obeisance let us ponder what being a Friend of Israel really entails. It means aligning yourself with the vilest villainy. It means embracing the terror and ethnic cleansing on which the state of Israel was built.

It means embracing the jackboot thuggery that abducts civilians, including children, and imprisons and tortures them without trial.

It means embracing the theft and annexation of Palestinian land and water resources, the imposition of hundreds of military checkpoints, severe restrictions on the movement of people and goods, and maximum interference with Palestinian life at every level.

It means embracing the strangulation of the West Bank’s economy and the cruel blockade on Gaza.

It means embracing the denial of Palestinians’ right to self-determination and return to their homes.

It means embracing the religious war that humiliates Muslims and Christians and prevents them from visiting their holy places.

It means endorsing a situation in which hard-pressed British and American taxpayers are having to subsidise Israel’s illegal occupation of the Holy Land.

And if, after the most recent bloodbaths inflicted by the Israelis on Gaza, you are still Israel’s special friend, you are comfortable with blowing to smithereens hundreds of children, maiming thousands more, trashing vital infrastructure such as hospitals, schools, power plants and clean water supplies, and causing $6billion of devastation that will take 20 years to rebuild. And, by the way, where is the money for that coming from?

By then you should consider how you no longer qualify for membership of the human race and it’s time for the revolver on the silver tray.