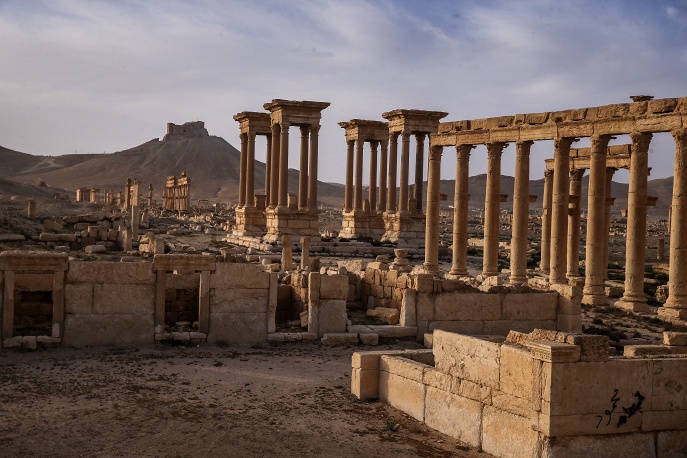 [ Note: The anonymous leak game was played today where a UNSC diplomat was cited as saying John Kerry has told several Arab countries that Putin had agreed to to transfer Assad to another country, but of course the timing and context no one really knew.

I would have to ask, why the hell does anyone have to agree to that? It means nothing. It’s a bag of air. Russian diplomats do not call people liars, but Putin’s spokesman Dmitry Peskov used their polite terminology of the “published information does not correspond to reality”. I could never be a diplomat.

The report is a lie. Putin would have no reason to agree to such a thing. He doesn’t have to. Why would the Russians throw away their steadfast foreign policy position of never publicly discussing their preferences about the internal politics of other countries?

In Palmyra this week, the 25 yr old Russian Special Forces forward observer did not call an airstrike in on himself and the jihadis who were about to capture him, in order to swing an election. He was fighting terrorists with his last breath so they could not humiliate him as a captive, whereas all those who have been backing these terrorists, East and West, they don’t know what humiliation is, so it is our job to teach them… JD ]

Syrian President Bashar al-Assad says the transitional government in his country should include independent forces, the opposition and forces loyal to the government.

Assad says the formation of the new government can be resolved in the Geneva talks. He made the remarks in an interview with Russia’s RIA news agency. Assad also said the government and the opposition are formulating the basic principles, based on a UN document, for further negotiations.

The Syrian president also rejected the idea of federalizing his country, stressing that the majority of Syrian Kurds want to live in a united Syria. Assad says the conflict has cost the country more than 200 billion dollars and restoring the infrastructure will take a long time.