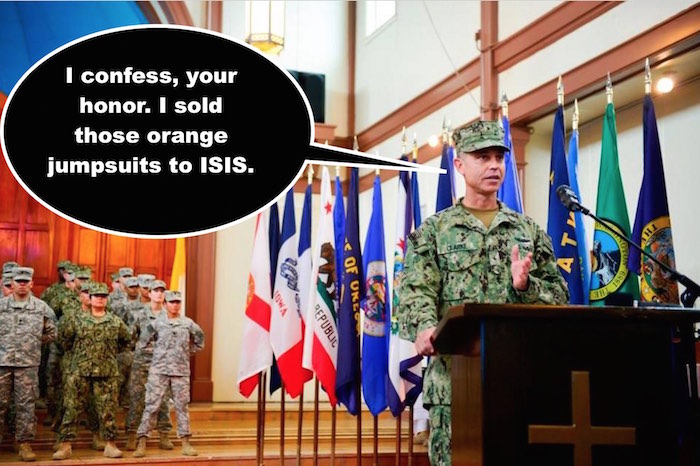 Rear Admiral Peter J. Clunk, Commander of the notorious Guantanamo Bay prison, was arrested yesterday and charged with selling the prison’s trademarked orange jumpsuits to Islamic State terrorists for use in beheading videos.

Military prosecutors allege that Adm. Clunk and three co-conspirators illegally removed thousands of jumpsuits from the prison laundry and sold them for as much as $2,500 each to ISIS operatives. The transactions took place after midnight on Guantanamo beaches, where the ISIS jihadis would arrive in inflatable dinghies after parking their Dolphin Class submarines offshore.

Clunk has reportedly defended his actions, asserting that by grossly inflating the prices of the jumpsuits, he was helping wage economic war on ISIS: “Those idiots are paying thousands of dollars per jumpsuit, so why not take their money? What I did was no different from what Ollie North did to the Iranians or what Leo Wanta did to the Russians.”

But prosecutors allege that ISIS could not have created its terrifying beheading videos without the orange jumpsuits, and that Clunk’s actions constituted treasonous complicity in enemy propaganda operations.

The prosecution is hoping to see Clunk sentenced to life imprisonment – without benefit of trial –  in the very prison he once commanded. “If innocent taxi drivers can be thrown in Guantanamo for life without being charged with or even suspected of any crime, this ‘jumpsuit jackass’ deserves even worse treatment,” said Chief Tribunals Commissioner Peter Brownbutt.

ISIS Caliph Abu Bakr al-Baghdadi, who recently died in an Israeli military hospital, could not be reached for comment.