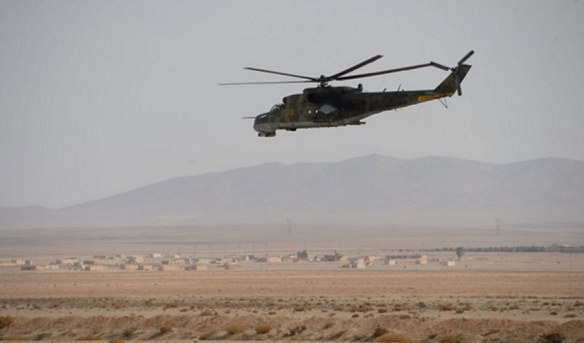 TEHRAN (FNA)- The Syrian army’s engineering units started repairing and reconstructing Palmyra (Tadmur) military airport in a bid to pave the way for it to resume its routine activities and operations.

The army’s engineers are working hard to prepare the Palmyra military airport for the upcoming operations against the Takfiri terrorists.

Palmyra airport is regarded an important air base for the Syrian army’s military choppers and fighter jets.

Tadmur which was under the ISIL control is an important center for the army’s future military operations to win back strategic regions, specially in Deir Ezzur and Raqqa provinces.

The importance of Palmyra airport lies in the fact that it is located between al-Tal and al-Hayel mountains and to al-Sukhneh to the North and Quaryatayn to the South.

Palmyra military airport is close to Deir Ezzur and Raqqa cities which are high strategic importance.

The Syrian army is preparing for taking control of several oilfields in al-Sukhneh.

Other army units are moving Southward towards al-Quaryatayn which is an important economic hub because several oil and gas pipelines pass through it.

The Syrian army is also planning to prevent the ISIL terrorist group from gaining access to al-Qalamoun mountainous regions in Damascus countryside.

In a relevant development on Wednesday, Syrian Information Minister Omran al-Zoubi underlined that the recent victory of his country’s army in winning back Palmyra will surely pave the upcoming advances in Deir Ezzur and Raqqa provinces.

“The military gains achieved by the Syrian army and the popular is of a great military and political significance which will open the doors for moving eastward and northward  towards the Deir Ezzur and Raqqa provinces,” the Arabic-language media outlets quoted al-Zoubi as saying.

He reiterated that the link between the military operation in Palmyra and continuing it towards Deir Ezzur and Raqqa has nothing to do with the cessation of hostilities.

“No one could ask the Syrian army to stop its fight against ISIL terrorist organization,” al-Zoubi said.

The Syrian information minister expressed doubt about the seriousness of the US-led international anti-ISIL, and said, “The coalition’s fight has not yielded any results on the ground.”

On Sunday, the General Command of the Syrian Army and Armed Forces confirmed that Palmyra and the mountains and hills overlooking it have now come under the army’s full control.

“Security and stability has been restored to Palmyra following a series of precise and effective military operations that were carried out by the army units with the help of the popular defense groups, being backed by the Syrian and Russian Air Forces,” the Army Command said in a statement.

The ISIL terrorist organization has been dealt quite a heavy blow with army’s capture of Palmyra, said the Army Command, adding that the achievement has severely damaged the terrorists’ morale and pressed the start button for the organization’s collapse and defeat.

“This achievement proves that our brave army, aided by the friends, is the only effective force capable of fighting terrorism and eradicating it,” the statement said.

The Army Command clarified that the importance of today’s achievement stems from the significant strategic location of Palmyra city being a major link connecting the Central, Southern, Eastern and Northern areas, and from the historical and tourist status of the city as it stands witness to one of the most ancient human civilizations ever.

With Palmyra city under control, military operations against ISIL will expand starting from this springboard towards various axes and directions, on top being Deir Ezzur and Raqqa, especially that this victory helps in further tightening the noose around ISIL terrorists and cutting off their supply routes in areas under their control until having these areas fully freed, the statement explained.

The statement made it clear that the army, together with the popular defense groups and the Russian and Syrian Air Forces, will go ahead with military operations against ISIL and al-Nusra Front and other terrorist organizations.