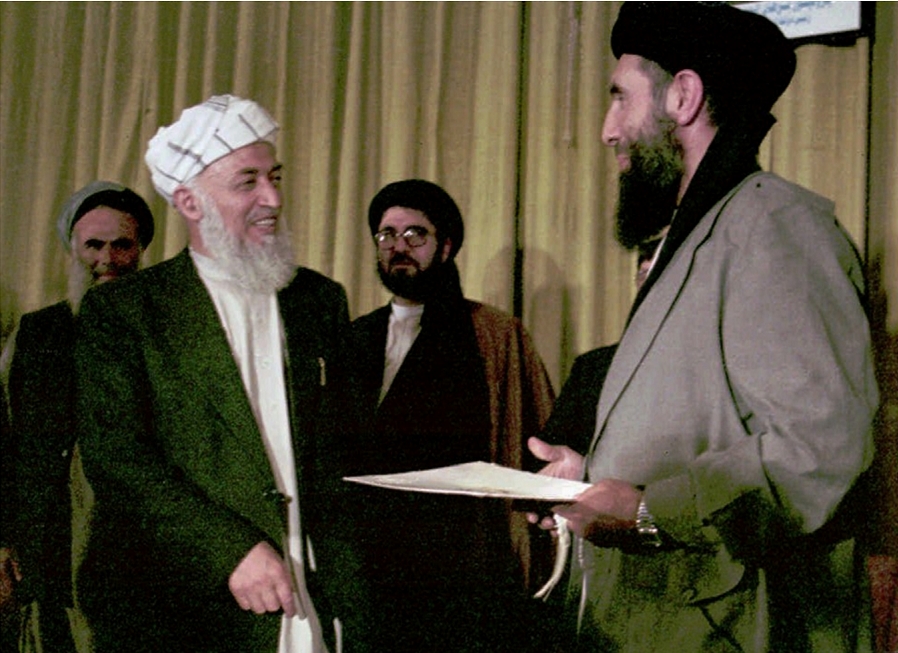 First of all the Pakistani media and then the Afghan media reported the detention of Mullah Mohammad Rasool, the former Governor of Nimrooz. Pakistani media reported that Mullah Muhammad Rasul became arrested by Pakistani security forces while he was trying to enter Pakistan through the Afghan border. This report is yet to be confirmed either by sources near to Mullah Muhammad Rasul or by the Taliban group. Some sources even say that he is not arrested by Pakistan.

Some reports were indicating that Mullah Muhammad Rasul was seen in Karachi and had been living there; as he was not seen in the media since several months, hence, perhaps, he would have visited Iran and Pakistan in past times.

It is said that Mullah Muhammad Rasul Akhund had intention to keep contact with Iran and make closer ties with it. Need to mention that Pakistan had/has arrested those leaders of the Taliban that had/have attended Iran.

Sources close to Mullah Muhammad Rasul Akhund said that he has conditioned his participation in the meeting to the participation of Mullah Akhtar Mohammad Mansoor, meaning that he would participate, if they were participated.

It was also said in the previous quadrilateral meeting that those Taliban leaders who do not participate in the meeting are going to be eliminated and arrested. Now, Pakistan, once again, wants to receive privilege and indicate that if it could not bring the Taliban; however, it was able to detain one of the Taliban leaders named Mullah Muhammad Rasul Akhund. It is also said that Pakistan had arrested a number of Taliban leaders in last March.

The political deputy Minister of Afghan foreign ministry, Hekmat Karzai, had also said that Pakistan is yet to fulfill its promises. The High Peace Council (HPC), Meshrano Jirga (Upper House of the Parliament) and Wolesi Jirga (Lower House of the Parliament) have expressed doubt over the peace-related activities of Pakistan. Meanwhile, the acting head of the National Directorate of Security (NDS) said that Pakistan encourages armed men to enter Afghanistan and fight there.

An attack launched on Christians in Lahore City of Pakistan on March 27, and the Pakistani Taliban splitter group of Jamiat Ul Ahrar claimed responsibility for it. The involvement of regional intelligence cannot be denied in this event. Moreover, fulfillment of the promises Pakistan made would be procrastinated, because it would say that it has faced a huge challenge inside the country. It is worth mentioning that whenever struggles on peace are made; such big incidents cause these efforts to become delayed.

Detention of any Afghan, whether he is Mullah Muhammad Rasul Akhund or former governor of Herat, Said Fazlullah Wahidi, by Pakistan is an incorrect job.

If peace was provided or the Taliban were harmed or weakened through detention, pressure and power, the prisons of Pakistan, Afghanistan and Guantanamo Bay became filled with them and this series is going on; also, when a member of family became imprisoner, the remaining members of the family try to get revenge; hence, the graph of opposition going upward instead of coming downward.

The issue would become bigger; the Afghan government would ask Pakistan to surrender Mullah Muhammad Rasul Akhund to them; and if he was detained by Pakistan, it, in prison, would try to make him to accept its conditions.

If Mullah Muhammad Rasul Akhund was apprehended the Afghan government, then, the big game of Afghan and Pakistani government on splitting the Taliban would end; but if Pakistan does not apprehend him to the Afghan government and tries to make him accept their entire conditions and, then, release him; it is more dangerous, it is a suicide.

Struggles on dividing Taliban under the banner of Peace

Some Afghan politicians also say that Mullah Muhammad Rasul Akhund has secret relations with the Afghan government which tries to become closer to him through using tribal influence, and keep contact with him through government-pro Nowrozo leaders.

There are some reports that indicate the appointment of Jabar Khan in Helmand is related to this issue. The government tries to encourage Nowrozi leaders to make the ties between Mullah Muhammad Rasul Akhund and the government closer. Member of Parliament and Army Operation General Jabar Khan was hoping that the leaders of Nowrozi tribe in Helmand and Farah would listen to him and they would cooperate with him, and so he would split the Taliban; however, he was not able to do it.

Need to mention that majority of the Nowrozi tribe in the south of Afghanistan are companions of the Taliban; and if the Afghan government had pursued this plan, definitely, the Taliban would become harmed.

Some politicians say that struggles on dividing the Taliban would create further problems in Afghanistan; when the commanders of different parties of Mujahedeen became encourage to act independently, the ground for civil war became paved. Now, the struggles for dividing the Taliban that America and the Afghan government invest on it would be another problem in the future. Now, the Afghan government has lost the control over Afghan Local Police (ALP) or Arbaki; it is not as big threat for the Taliban in the future as it has already defamed the government in and out of home, and has increased distance between the nation and the government.

Really, how much are the Taliban divided?

Now, Iran wants to bring itself closer to the Taliban; Saudi Arabia and Pakistan are afraid of closeness between Iran and Taliban and, hence, they try to not put that much pressure on the Taliban which could make them to bring their ties much closer with Iran.

I will write an exclusive article on Iran-Taliban ties and their positive and negative impacts on Afghan people, region and the Middle East; however, providing that much information would be enough for now.

Some Taliban leaders were dissatisfied with the leadership of Mullah Akhtar Mohammad Mansoor, their opposition was not so obvious and they still remain at their homes, i.e. Said Mohammad Tayyib Agha, the head of Qatar Office, Mawlawi Nek Mohammad and Qari Ziaurrahman Mandani, the members of Qatar Office and Mullah Abdul Qayoum Zakir, the famous military commander of the Taliban. It is also said that the Taliban still make efforts to consider the fruitful ideas of mentioned people and if they could, to make them rejoin their ranks. Time will show that whether these individuals would become satisfied, rejoin or they would remain at home forever.

Some of the abovementioned individuals are either out of play or still hesitant.

Some armed men in Badghis also announced their support to Mullah Muhammad Rasul Akhund and their war against Mullah Akhtar Mohammad Mansoor. It is said that the commander of these armed men was a former commander of Hizb-i Islami and had relations with the Afghan government.

Some domestic media were also broadcasting the reports on fight between the Taliban repeatedly, calling it Jihad of a Taliban group against the other Taliban group, it is what the Religious Council of Afghanistan could not call the fight of the government against Taliban as “Jihad” in past 15 years.

Mullah Nangyali fought against the Taliban on behalf of Mullah Muhammad Rasul Akhund in Shindad District; however, he received heavy hits from the Taliban, and, then, joined the Afghan National Army (ANA). Some unconfirmed reports indicate that Mullah Nangyali is in Kabul now.

Small oppositions should be considered seriously

Some analysts think that the Taliban group of Mullah Muhammad Rasul is perished and the main group of the Taliban would not have any problem in the future; is it right?

The Taliban leaders should not underestimate the split of Mullah Mohammad Rasul Akhund; if the Taliban underestimate these disputes and did not consider them well, these splits would become wider, and it would be hard to be controlled in the future.

The American experience in Iraq that made Sunni Muslims to fight against each other was quite fruitful.

America and the Afghan government would make efforts to have Mullah Muhammad Rasul reach such a point and to make Taliban and others under the banner of the Taliban to gather around him, and if Mullah Mohammad Rasul Akhund was kept in Pakistan’s prisons or faced other threats, another group under the banner of Taliban would be made to full his gap, be active in Afghanistan and eventually come to Kabul, then,   the main group of the Taliban would be remained outside as well as Hizb-i Islami (Hekmatyar’s). Of course, it is a plan and time will show that whether it would be implemented or not.

It is said that America has to requested Arabic countries, Turkey, Pakistan and Iran to help her halt the income sources of the Taliban, and if assistance was provided, it would be provided to Mullah Muhammad Rasul Akhund or every other splitter group of the Taliban in order for the main group of the Taliban to become weaken and, then, to become ready for peace talks.

After the movements like upraised people, ALP and ISIS that were created for weakening the Taliban were not as fruitful as America and regional intelligence agencies were expecting, therefore, they, now, are waiting to hit the Taliban by Taliban.

Briefly, it is good for the Taliban to have an address for talks as well as for the government. Also, America is supposed to become ready to negotiate with the Taliban.

If the efforts on splitting the Taliban are made or if the government-pro authorities announce self-run governments or challenges the government as its signs were seen in Balkh and Sar-i Pul; such struggles are considered as continuation of war and obstacles toward peace.

Peace is mandatory for the people. The involved sides do fighting and kill each other; however, the civilians became harm by this war. Awakened, responsible Afghan politicians and especially Afghan youth should put nationwide pressure of the various sides of war to become ready for peace. Meanwhile, the U.S should be asked not to end the Afghan war irresponsibly, it was what it did in Iraq. The present weak Afghan Unity Government is the mechanisms of America, it should take the responsibility and become ready for establishing a government which would be acceptable to entire Afghans. Also, the presence of foreign troops is the main reason behind war in Afghanistan; America should end the Afghan war with responsibility and announces the timetable of the withdrawal of its troops.