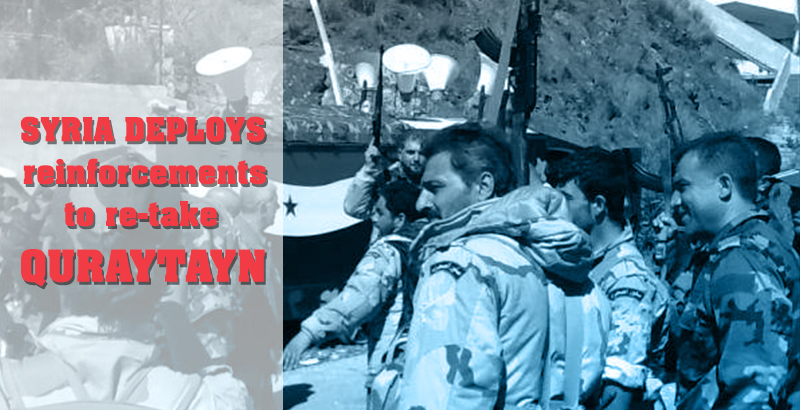 The Syrian Arab Army’s engineering units have started repairing and reconstructing of Palmyra military airport in order to resume its routine activities and operations. The airport will likely become an important air base for the Syrian army’s military choppers and fighter jets, especially, in case of advances on Deir Ezzor and Raqqa.

Meanwhile, Russian and Syrian warplanes continued air raids against ISIS positions at Al-Sukhnah and along the Palmyra-Deir Ezzor road. The oil reach town Al-Sukhnah is a logistical point of the ISIS oil smuggling business.

The SAA and its allies continue attempts to liberate the town of Quraytayn. The Syrian government reportedly decided to deploy additional reinforcements to strengthen 4000-strong military grouping aimed to conduct operations in the area. A new full-scale advance on the town is expected in the nearest future.

ISIS militants attacked Sheikh Hilal on Mar.31. The militants captured few checkpoints in the nearby area but failed to enter the town. Clashes are ongoing there.

Units of the joint detachment of the International Anti-Mine Center of the Armed Forces of the Russian Federation arrived at the Hmeimim airbase on Mar.31 to take part in a mine clearing operation in the city of Palmyra.

The Iraqi security forces supported by coalition air strikes and US troops have advanced towards the town of Hit in an attempt to dislodge ISIS militants. Liberation of Hit, strategically located on the Euphrates River near Ain al-Asad air base where U.S. forces are training Iraqi troops, will help to cut the militant group’s logistic in the area leaving ISIS-held Samarra and Fallujah without reinforcements.