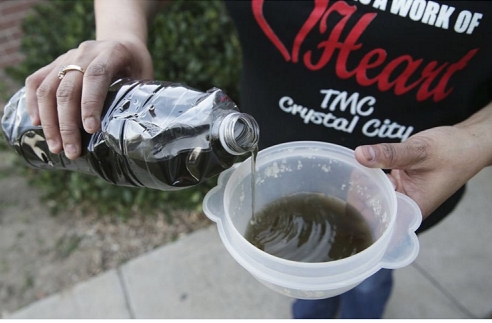 Bruni’s taps deliver poison to its poor, largely Hispanic residents but other rural towns in the state suffer with water that is black, brown or stinks of rotten eggs

Julio Perez sprayed his yard with water from a garden hose. While the flowers were no doubt grateful for the refreshment on a warm afternoon, there was no chance of him quenching his own thirst with a gulp of tap water.

The 66-year-old lives in Bruni, a tiny Texas town notable for a very unwelcome reason: the quantity of arsenic in its water. In 2014-15 the average concentration of the carcinogen was 79.6 parts per billion: almost eight times the federal limit.

This was a mild improvement on the long-term average of 85.3 ppb since 2002, but Bruni was the runaway leader at the top of the Texas arsenic standings in areport compiled by the Environmental Integrity Project. The next-worst rate was 56.2 ppb in a district serving the 5,000-strong ranching community of Hebbronville, 13 miles from Bruni.

Using data from the state agency, the Texas commission on environmental quality (TCEQ), the report identified 65 Texas community water systems, serving over 82,000 people, which over the past two years have exceeded the arsenic standard set by the Safe Drinking Water Act. It found that some 51,000 of them in 34 communities have been exposed to drinking water with excessive levels of arsenic for at least a decade.

This is not news to the residents of Bruni, a poor, mostly Hispanic place 45 miles east of the border with Mexico. “Most of the people don’t drink the water any more,” said Perez, who has lived there for more than 25 years. “It looks cloudy,” said a woman in town who declined to give her name. “We don’t drink it,” said another.

The borderlands are replete with small, underresourced towns like Bruni where many residents have given up on using the water.

There are hundreds of privately run drive-up water mills in parking lots in the Rio Grande Valley and other disadvantaged areas of Texas: machines that dispense clean water to customers who bring their own containers.

“The quality of water and the fact that it’s taken years and years for [state and federal authorities] to even begin looking at this is atrocious and families in the … rural areas have to deal with so much more in addition to the water quality,” said Amber Arriaga-Salinas of Proyecto Azteca, a not-for-profit organisation that works to improve conditions for low-income families.

In Bruni, Perez has installed a filter in his home but is not confident it blocks the toxins. Instead he drinks bottled water – one of the items readily available in Bruni’s modest general store – buying it by the gallon.

And he speculated that the water has caused health problems locally. “For me, people do get sick because of it. I know it’s the water,” he said.

Scientists have linked high levels of arsenic in drinking water to increased risks of cancer, lung and cardiovascular diseases, skin conditions and diminished intellectual ability in children. Recent research suggests arsenic is more dangerous than previously thought. In 2001 the federal Environmental Protection Agency lowered its standard from 50 ppb to 10 ppb.

A new study by Dartmouth Collegeindicates that even low levels of arsenic consumed by pregnant American women in drinking water and food may affect the size of babies’ heads at birth.

“My recommendation would be to not drink this water,” said Habibul Ahsan, an epidemiology professor at the University of Chicago who is an expert in the health effects of arsenic. He said that even quantities below the federal limit – let alone eight times over it – posed risks over a period of years. “These are not safe levels,” he said.

Texas regulators take a more laid-back attitude. Critics claim the TCEQ –previously accused of putting economics and politics ahead of environmental concerns –
is downplaying the potential health threats of arsenic-laden water. Suppliers with contaminated water are required to issue public notices but the language they use can vary from state to state.

In some other states the warnings are starker. As the Environmental Integrity Project report points out, Michigan, Florida, Wisconsin and others advise private well owners not to drink water that exceeds 10 ppb.

The TCEQ said in a statement that it “agrees with US Environmental Protection Agency that arsenic levels typically found in the United States, specifically Texas, do not pose an immediate health threat.

Tom Pelton, one of the report’s authors, said: “We’re not claiming it’s an immediate threat, it’s a chronic long-term health threat. It’s like smoking a cigarette. If you smoke one cigarette you’re not going to drop dead instantly. But if you smoke cigarettes over 10 years you will have an increased risk of cancer and that’s essentially what it’s like to drink water with this level of arsenic in it.”

Water quality across the country has been in the spotlight since it emerged that residents in Flint, Michigan, have been exposed to high levels of lead.

“The obvious parallel with Flint is that the state of Michigan knew about the drinking water contamination but essentially didn’t warn people and kind of brushed it off, like ‘hey, not a big deal’. We found the same troubling problem in Texas where Texas knows about all this drinking water contamination but is not clearly warning people to stop drinking the water,” Pelton said.

TCEQ’s website lists 94 violations by Bruni’s water supplier, mostly for arsenic and not following rules related to public notices; 91 of them occurred in the past 15 years. While all are listed as having been “addressed” either formally or informally, only 11 are characterised as “resolved”.

Efforts to contact the Bruni Rural Water Supply Corporation were unsuccessful. According to information on its website, which does not appear to have been updated since 2013, it is a non-profit that paid $26,157 in salaries and wages in 2011. In common with other hyperlocal rural suppliers it is unlikely to have the funds or expertise on its own to solve the challenge of substantially removing an element that occurs naturally in groundwater in high concentrations in many parts of the US, including the north-east, upper midwest and California.

The report lists a number of mobile home parks, and even a prison, and calls for greater state and federal aid to improve facilities. Violators tended to be in “small rural communities without a lot of money”, Pelton said. The borderlands are replete with places that fit such a description, even if their troubles may never receive widespread media attention.

Drive north-west of Bruni for 130 miles and you reach Crystal City, population 7,500, which boasts proudly that it is “Spinach Capital of the World”. In February it drew glances for something other than its statue of Popeye: most of its civic leaders were arrested on corruption charges. Then black water started flowingfrom taps, seemingly the result of sediment being flushed through a system that had not been cleaned in two decades.

An estimated 400,000 people live in colonias in Texas – economically deprived, largely Hispanic settlements along the border with Mexico where many residents are undocumented, do not have health insurance and endure ramshackle infrastructure that contributes to health issues. A few isolated places, particularly in far west Texas, still do not have running water, while many communities do not trust the liquid that spurts from their taps.

For those who live in the South Tower Estates colonia, seven miles north of the Rio Grande river that separates Mexico from the US, a longstanding worry is far more obvious than the invisible menace of arsenic in Bruni. Walking around feels like wearing a breathing apparatus connected to a tank of rotten eggs. For those not used to it the stench is immediately nauseating.

It comes from an outdated wastewater treatment lagoon that is only 150 metres from the nearest houses and relies on sunlight and oxygen to work properly. Or not work properly. “A lot of the time it stinks, it smells like dog poo. It smells bad, bad,” said one resident, Victoria. “Sometimes it gives me headaches.”

A community organisation, Arise, is leading a campaign for change amid a permit renewal process. “People don’t feel comfortable inviting friends and family over or letting their kids play outside,” said Andrea Landeros, a coordinator. She spoke last week in a meeting room five minutes’ walk from the plant. A template for how to complain was scrawled on a whiteboard. The windows were shut but the fetid odour permeated the building anyway.

“We’re going to do everything we can to alleviate and maybe at one point in the long term to do away with the lagoon system,” said Luciano Ozuna, city manager of Alamo City, which is responsible for the facility. He said that about $1.3m has already been spent trying to improve conditions.

“Next week we’ll approve the purchase of some additional aerators for the lagoon system that we have and we believe that with those aerators it will alleviate a lot of the smell. That’s very close to $200,000 to buy those aerators and hopefully here within the next month, month and a half, we’ll be able to install those things,” he said.

Residents are sceptical: the problem has endured for decades. Victor Guerrero has lived in the area for 25 years. “I smell it all day long,” he said through a translator, leaning on the counter of a colourful shack offering $1 tacos. “It affects health because the smell is so strong. Two of my family members have really bad allergies and it affects them.”

As for his water: “kind of brown, with sediment when you open the faucets”, he said. “I definitely don’t drink or cook with the water.