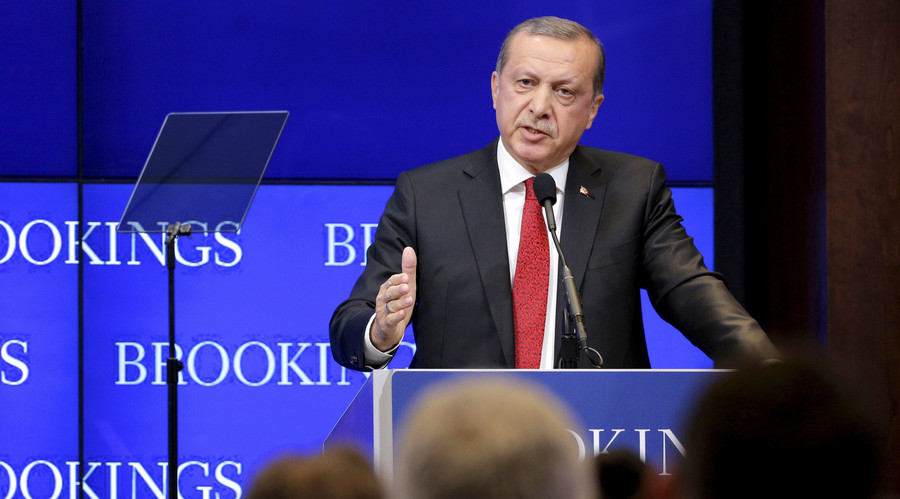 Erdogan threatens to sue those who insult him

Erdogan is the gift that keeps on giving. He comes to Washington to do some image damage control and gets dissed by Obama for his continuing to feed supplies and manpower into ISIS as a NATO ally during the Syrian cease fire.

He is in the middle of an expanding crackdown on his political opponents and all opposition media. Last week, we heard he is in the process of making the Syrian refugees Turkish citizens and resettling them in the Kurdish areas to add their several million votes to give him a more comfortable majority.

If the Kurds don’t like that and start killing the Syrians, who will be politically disenfranchising them, Turkey will then arm the Syrians and let them kill each other. What’s not to love about Grandpa Erdo? Turkey does not need any enemies, as it has the best one it could possibly have as head of state. It reminds me of our Bush (43) years.

After the Obama snub, Erdogan shoehorned himself into the Brookings Institute for a three-hour gig to put on a show as to what an important ally he is to the US. His security thugs spotted a Turkish opposition reporter and a US critic they did not like and proceeded to throw them out with the cameras rolling with Secret Service and US security people trying to intercede, along with threats to kill the offenders voiced by the Erdo team.

From the Daily Mail we have:

“In footage filmed by Cenk Sidar, a Turkish columnist, the agent is heard saying:

To its credit, the Brookings Institute executives brought both people back to the lecture, with the admonition that credentialed media were welcome to their events. It was nice not to see America on its knees to foreign potentates, although I have to wonder what they would have done if Netanyahu’s thugs were trying to throw reporters out because they thought they might be anti-semites.

There is plenty to arrest him for — and let a new interim government sort it all out. You can apologize to the Russians for the plane shot down, stop supplying ISIL, and play a key role in getting the Syrians back to their homes, plus stopping Erdogan’s moves against the Kurds, and come out as the heroes in all this.

The Turkish president warns that he would continue to sue critics who insult him in the country.

Recep Tayyip Erdogan issued the warning on the sidelines of the Nuclear Security Summit in Washington. Activists say Erdogan has filed over 1800 court cases against individuals – including many journalists – for insulting him since he become president in August 2014, which have led to more than a dozen sentences.

Those who insult the president will have to languish behind bars for up to four years. The Turkish government is under international criticism for restricting press freedom and crackdown on journalists.