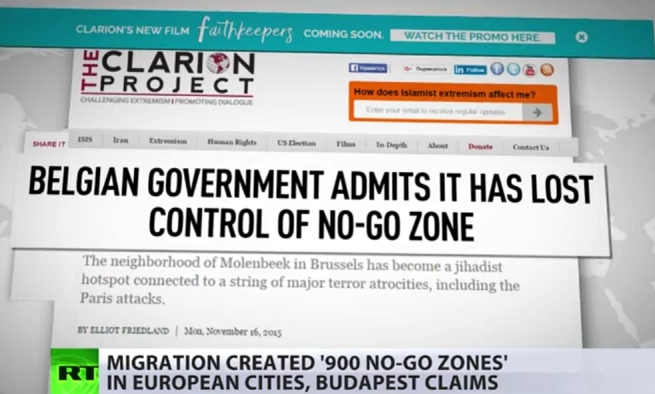 [ Editor’s Note: Hungary hits the nail on the head with the 900 no-go terrorist nests all over the EU, and is challenging the incompetency of the EU leadership over quite a period of time. But out of good manners, Hungary will not say what I will.

There could only be one of two reasons, the obvious incompetence… but when it extends over a long time through many political administrations, one has to look deeper. Where were all the professional security people during all of this, both the civilian and military side?

The chances that they stood down — along with the political class — without a powerful entity putting on the pressure seems very slim in my book. I would not use the “doo-doo happens” convenient sluff off.

Where does this leave the unfortunate citizens, if their politicians and defense classes are using their own people as cannon fodder on this emerging mini-war of the worlds?

The good news is that we saw a significant political shift in the last German elections, and we have the Dutch vote coming up and the challenges from the newer East European members, Poland and Hungary, who are acting like they don’t want to be cannon fodder… but again, for whom?

The EU is not something they can punch in the face, or even spray paint like a ghost. We will cross our fingers that this early resistance we are seeing now has some staying power, because it will take a long time to undo the damage that has been foisted on Europe… Jim W. Dean ]

More than 900 ‘no-go’ places with large numbers of illegal migrants are concentrated in EU capitals, such as Paris, Stockholm, Berlin and London, the Hungarian government says, adding no one knows how many terrorists arrive undetected.

“The “no-go” areas can’t or almost can’t be controlled by the authorities. In European cities such as Paris, London, Stockholm or Berlin, where there is a high number of immigrants, more than 900 of these “no-go” zones exist,”says the website, launched this week by the government ahead of a referendum in Hungary on the EU quota plan.

“The mandatory European quotas increase the terrorist risk in Europe and imperil our culture,” the website says. “Illegal migrants cross the borders unchecked, so we do not know who they are and what their intentions are. We do not know how many of them are disguised and may be terrorists.”

The website also showed a ticking clock representing an asylum seeker arriving in the EU every 12 seconds.

Those who come to the EU illegally “do not respect our laws and do not want to share common cultural values,” the website says.

“If we do not act, we will not recognize Europe in a few decades.”

The Hungarian government has long rejected a mandatory quota for the resettlement of migrants and refugees. To tackle the crisis, it argues the EU should secure its external borders.

In September 2015, in an attempt to prevent migrants from illegally crossing into Hungary, the government decided to erect a fence on the border with Serbia. It also introduced tough punishments of up to three years in prison for those abusing the border crossing or damaging the barrier.

However, the four-meter-high, razor-wire fence hasn’t stopped thousands of illegal migrants from forcing their way into the country.

In 2015, over one million asylum seekers arrived in Europe, according to data from the International Organization for Migration. Most came from Syria, where a civil war has claimed the lives of 250,000 people and displaced 12 million others since 2011, UN figures show. The asylum seekers also come from Afghanistan, Iraq, Libya, Eritrea, Mali and other countries.