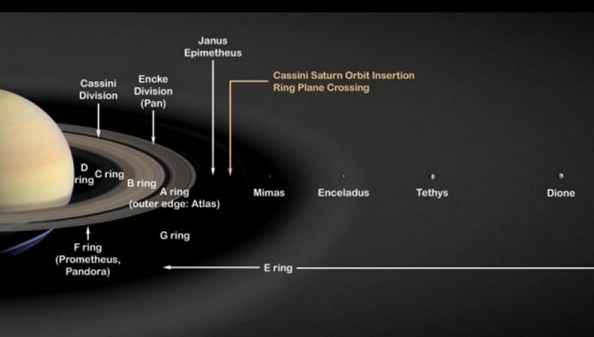 TEHRAN (FNA)- New research suggests that some of Saturn’s icy moons, as well as its famous rings, might be modern adornments. Their dramatic birth may have taken place a mere hundred million years ago, more recent than the reign of many dinosaurs.

“Moons are always changing their orbits. That’s inevitable,” says Matija Cuk, principal investigator at the SETI Institute. “But that fact allows us to use computer simulations to tease out the history of Saturn’s inner moons. Doing so, we find that they were most likely born during the most recent two percent of the planet’s history.”

While Saturn’s rings have been known since the 1600s, there’s still debate about their age. The straightforward assumption is that they are primordial — as old as the planet itself, which is more than four billion years. However, in 2012, French astronomers found that tidal effects — the gravitational interaction of the inner moons with fluids deep in Saturn’s interior — are causing them to spiral to larger orbital radii comparatively quickly. The implication, given their present positions, is that these moons, and presumably the rings, are recent phenomena.

Cuk, together with Luke Dones and David Nesvorny of the Southwest Research Institute, used computer modeling to infer the past dynamic behavior of Saturn’s icy inner moons. While our own moon has its orbit around Earth to itself, Saturn’s many satellites have to share space with each other. All of their orbits slowly grow due to tidal effects, but at different rates. This results in pairs of moons occasionally entering so-called orbital resonances. These occur when one moon’s orbital period is a simple fraction (for example, one-half or two-thirds) of another moon’s period. In these special configurations, even small moons with weak gravity can strongly affect each other’s orbits, making them more elongated and tilting them out of their original orbital plane.

By comparing present orbital tilts and those predicted by computer simulations, the researchers could learn how much the orbits of Saturn’s moons grew. It turns out that for some of the most important satellites — Tethys, Dione and Rhea — the orbits are less dramatically altered than previously thought. The relatively small orbital tilts indicate that they haven’t crossed many orbital resonances, meaning that they must have formed not far from where they are now.

But how long ago was their birth? Cuk and his team used results from NASA’s Cassini mission to help answer this question. The Cassini spacecraft has observed ice geysers on Saturn’s moon Enceladus. Assuming that the energy powering these geysers comes directly from tidal interactions, and that Enceladus’ level of geothermal activity is more or less constant, then the tides within Saturn are quite strong. According to the team’s analysis, these would move the satellite by the small amount indicated by the simulations in only about 100 million years. This would date the formation of the major moons of Saturn, with the exception of more distant Titan and Iapetus, to the relatively recent Cretaceous Period, the era of the dinosaurs.

“So the question arises, what caused the recent birth of the inner moons?” asks Cuk. “Our best guess is that Saturn had a similar collection of moons before, but their orbits were disturbed by a special kind of orbital resonance involving Saturn’s motion around the Sun. Eventually, the orbits of neighboring moons crossed, and these objects collided. From this rubble, the present set of moons and rings formed.”

If this result is correct, Saturn’s bright rings may be younger than the heyday of the dinosaurs, and we are fortunate to witness them today.