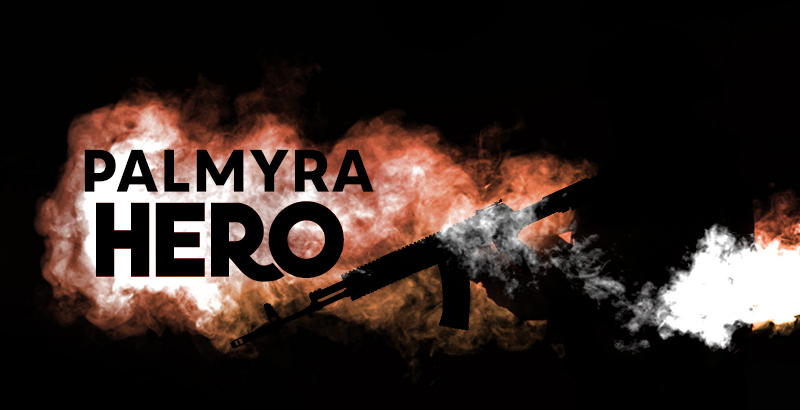 The Battle for Palmyra has no doubt had many heroes within all the fighting formations that have returned the UNESCO World Heritage Site back to Syrian sovereignty after nearly a year of ISIS depredations and vandalism. Their names and deeds will undoubtedly become known as more details of the battle are revealed to the public. In the meantime, however, one must note the contribution of Aleksandr Prokhorenko, a special operations, or spetsnaz, soldier who made the ultimate sacrifice during the Battle of Palmyra, the sixth Russian serviceman to give his life in the war against Islamist militants. Prokhorenko’s military occupational specialty was that of forward observer tasked with identifying and designating militant targets for strikes by Russian aircraft, a highly demanding and risky mission that placed Prokhorenko directly on the front lines.

While the exact circumstances of Prokhorenko’s death are still unclear, he reportedly found himself surrounded, possibly after the Syrian soldiers to whose unit he was attached were killed in combat, by ISIS militants and summoned an air strike on his own location in order to prevent himself from being captured and to kill as many of the militants who surrounded his position as possible. Prokhorenko is not the first to have performed such a deed in battle – there are numerous recorded instances of Red Army soldiers calling artillery fire on themselves as their position was about to be overrun by the Wehrmacht. Such deeds were invariably rewarded by a posthumous Hero of the Soviet Union status, and Prokhorenko will undoubtedly receive a posthumous Hero of Russia award in recognition of his heroism.

Aleksandr Prokhorenko, who was only 25 years old at the time of his death, was a native of the village of Gorodki in the Orenburg Region and a member of a family with a long-standing tradition of extended military service.

It has not yet been reported to which military unit Prokhorenko was permanently assigned at the time of his death. He finished the Air Defense Forces’ Academy in Smolensk before applying for the Special Operations Forces and subsequently being assigned to an unspecified spetsnaz brigade. Prokhorenko departed on a temporary assignment in late January without informing his wife of the exact location of his mission. His wife thought that he was heading for the Caucasus, and in fact that may have been the case, as his departure coincided with a special operations exercise in the Southern Military District which, among other things, specialized in training forward observer teams and attack aircraft crews in joint battlefield operations. It is likely that the team of forward observers, and possibly other personnel, departed for Syria shortly after the termination of the exercise, just as the air crews which participated in the exercise were used to reinforce the Hmeimim air group.

Prokhorenko is one of an undisclosed but growing number of Russian service members whose task, as trainers, advisors, planners, and forward observers, is facilitating the Syrian Arab Army’s victories. Their numbers are now being increased by deployments of combat engineers intended to sweep the mines and booby traps left behind by the retreating Islamic state all over Palmyra. The fact that the SAA is continuing its offensive even after the withdrawal of the bulk of the Russian aircraft suggests that the purpose of the air group was mainly to buy the SAA time in order to rearm, regroup, and retrain with Russian military assistance. Now that the SAA has established the upper hand on the battlefield, the need for airstrikes has considerably diminished. As the SAA advances from Palmyra on to Deir-ez-Zor and perhaps even Raqqa, we may hear of more cases like Prokhorenko’s. While the Russian involvement in Syria has become less visible, and therefore, politically less controversial, following the withdrawal of the bulk of Russian military aircraft, it is no less effective than it was before. And no less dangerous to the Russian troops deployed to Syria.