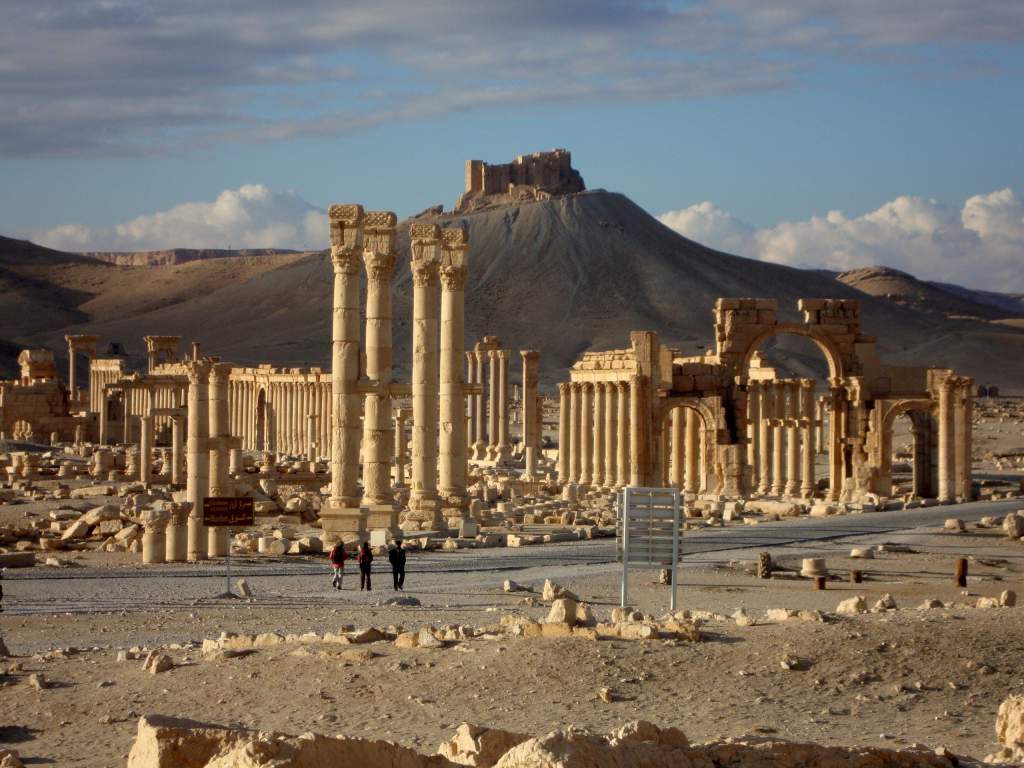 “More than any other time in history, mankind faces a crossroads. One path leads to despair and utter hopelessness, the other to total extinction. Let us pray we have the wisdom to choose correctly.” ~ Woody Allen

This week brought some reflection on how, at the beginning of the ceasefire, John Kerry tried to rain on the outcome by threatening that if it was not successful the US would have to consider reverting to its plan B fallback position, a code phrase for the Balkanization of Syria.

Another way to describe that is “divide and conquer by other means”. But we know that had always been the plan. So I wanted to use this article to show that it was the US coalition that actually got Balkanized by its failed policy, and that we all had a front row seat to watch it happen.

The fall of Palmyra has generated the expected “turning point” media articles, but the first turning point came about a year ago, after the first wave of Syrian army defections to the opposition.

Next came the subsequent assassinations and bombings targeting the remaining military and Intelligence leadership to “encourage” them to remove Assad with a coup and save themselves. They said “No thank you… we’ll fight”.

The second turning point of the revolution came when the US-NATO-Gulf State coalition decided to turn the war into a large scale terror operation — I assume to intimidate future targets about what would happen to them if they refused to bow down to the Neo-colonial steamroller.

We had sources inside Jordan FSA training program tell us they knew a lot of their trainees were ending up fighting with the jihadis. That had our own military supporting a proxy terrorist flanking attack against Damascus in conjunction with US coalition members Saudi Arabia, Qatar, Turkey in the north.

I won’t focus on the CIA, because it has been using terrorism for destabilization for so long that it doesn’t even raise attention any more. Whether Bush (43) or Obama was at the helm, the CIA and the State Department have engaged in using proxy terrorism when and wherever it suited them.

This multi-front terror war with its initial Free Syrian Army cover devastated much of Syria. It was as much a war against the Syrian people as against the Assad regime, and analogous to the Saudis attacking the people of Yemen, which is being called a war crime.

Iran came in with its advisors and helped Syria quickly build a national guard which took over local security so Syrian army units could concentrate more on protecting the threatened population centers.

Hezbollah sent its well-trained units to support key battles. The Syrian army did not implode as expected. That was a third turning point that helped give the advantage to Assad.

Then the chemical weapon false flag attack was deployed with the big Sarin gas attack and blamed on Assad, as it was intended to be the red-line crossing that would allow the US to launch a massive bombing campaign to crush the Syrian army and make it easy pickings for the jihadis.

But many of us could not believe Assad would hand his head over on a silver platter by doing a totally unnecessary gas attack like this. Those chemical stockpiles had been created to use against an Israeli invasion.

Patriotic elements of the US military and intelligence communities compiled evidence that the cel phone intercepts by the two Syrian officers alleged to have discussed ordering the move of the Sarin gas for its use, was a classic Cold War-style, staged communication.

They knew it would be intercepted by the NSA and used to trigger the red line retaliation. Veterans Today played a role in seeing that all that information got right to the President’s desk, and fortunately he ordered the bombing stand down with a mere hour to go before the planes were launched. That was the fourth and most significant turning point of the war.

We fast forward to the emergence of ISIL and its entry into the war, its brutality and success at drawing manpower from the other opposition factions to feed its ranks, as did al-Nusra. Some of their recruits came from those trained by the US military in Jordan.

That culminated in congressional testimony about the huge scandal of a $500 million annual program in Turkey for “5000 carefully recruited” FSA trainees who would even be afforded US air support. The initial groups that crossed into Syrian melted away, donating their equipment to the jihadis in return for their lives, or joining them. That utter policy defeat was the fifth turning point.

But the well-armed and financed opposition and terrorist brigades were able to continue grinding the Syrian army down to where it was in danger of collapsing. The Western coalition was beginning to think the end could be near in months, not years. The Russians had initial Syrian units in training for combined operations using the newest Russian equipment, but they did not have enough time to train enough units.

So the sixth turning point, which caught almost everybody off guard, was the Russians committing to a major air campaign to help stabilize and turn the momentum around, flying out of one small airbase. Veterans Today had a small team in Damascus for briefings just a few weeks before it started. We could sense there was a change in the wind, but felt that it would be a big infusion of new equipment with Russian operators, counter battery artillery, lots of drones, etc.

When the air campaign cranked up and the results began to sink in, the ”Night of the Kalibrs” was a new turning point, with four Russian destroyers firing 26 long range cruise missiles onto 11 targets. That was followed soon after by some submarine-launched missiles from the Mediterranean.

Then Moscow deployed all three of its heavy bombers to strike suitable larger targets, continuing its demonstration of the support firepower it could bring to bear on the anti-terror war in Syria. We began to see that Moscow was displaying how effective its military could be with modern combined operations, and the Syrian opposition groups and the jihadis felt the burn.

Turkey and Saudi Arabia began hinting of a possible combined anti-terrorism ground operation, code for invading northern Syria to save their terror proxies. The Saudis even staged the highly-inflated 350,000-man coalition exercise, where we never got to see anything of that scale in the photos or video. The ceasefire began with many from real opposition groups signing onto it, and several thousand Syrian army deserters took advantage of Assad’s amnesty offer.

This month, Moscow threw another curve ball by pulling out a large part of its air wing, which undercut the accusations that it was pushing for a military solution. Turkey continued its border provocations, but neither Russia nor Syria took the bait by retaliating.

The military focus became a somewhat holding action in the north, with a major push to secure the central areas and eastern areas, clearing Palmyra, then Deir-Ezzor and Raqqa.

This would eliminate any major bases for the Saudis to reinforce, and it will put the Syrian army back in control of its eastern border crossings to cut off jihadi supplies flowing either way. The remaining ISIL units would find themselves Balkanized into doomed unsupported units. Some are surrounded as I type.

Turkey has brought a terror war upon itself after bringing it to neighbors. The US just took a major step back from its NATO ally by removing all US military dependents from Southern Turkey over concerns of terrorism. This could also be a message to Erdogan that continuing to supplying the Jihadis inside Syria during the ceasefire would have relationship consequences.

The Kurds want the UN to consider war crime charges against the Erdogan government. NATO comments in support of Turkish actions have dried up.

Assad has rejected any discussions on federalization, a code word for Balkanization. He and his army, plus the Russians, Iranians and Hezbollah did not fight all this time to throw it all away at the end, merely to see Syria turn into another Libya. And this week, the Pentagon has admitted that Russia has made some positive contributions to the ceasefire and anti-terrorism effort.

The EU is reeling from the Brussels terror attacks and the subsequent revelations that its security services have long been overwhelmed with trying to keep up with all the suspected jihadis.

The German interior ministry shockingly admitted that not only was Europe going to have a long terror war, but he rattled off a list of cities that would be attacked like Brussels, and admitted that even Germany was not prepared.

The Russians were right all along — that the Western game of “good terrorists and bad terrorists” was a fool’s game. Hotels in Paris and Brussels are now empty. All it takes is one disposable jihadi team to repeat this effect in other major cities with these homemade nail bombs. Nobody seemed to care much when Syrians were dying. So I ask you all, who has Balkanized whom?