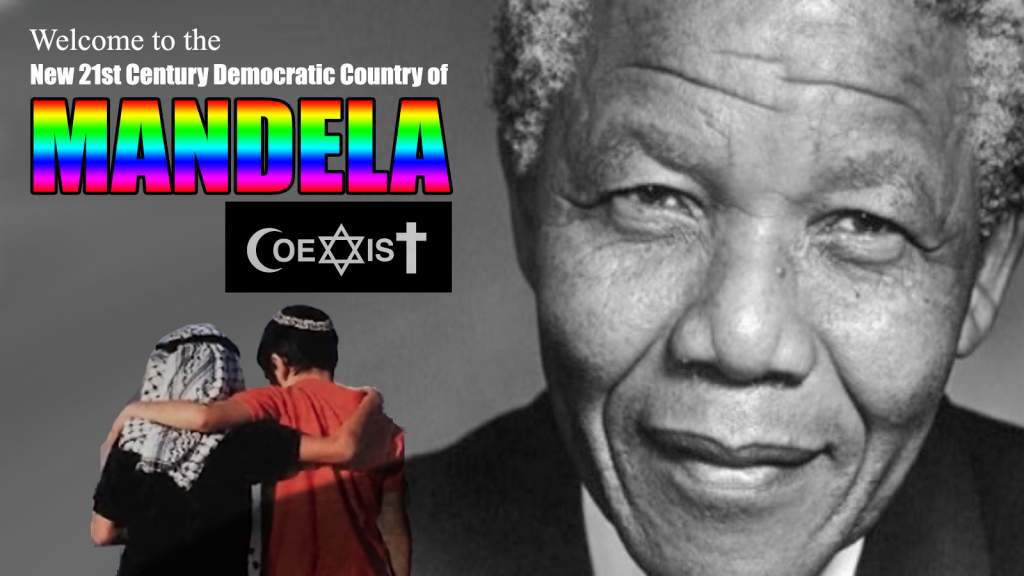 by Johnny Punish
In the positive spirit of our newly connected 21st century, we the peoples of the world hereby petition the country of ISRAEL to willingly and without any delay change its name to the new 21st century democratic country of MANDELA
And to immediately incorporate the Palestinian Occupied Territories and Gaza with all its peoples to make one unified country in full citizenship for everyone with 100% civil rights, liberty, freedom, and justice for all.
WHY MANDELA?
Nelson Mandela of South Africa inspired and led the defeat of the ugly failed 20th century institution of APARTHEID. His name has become a name synonymous with freedom, liberty, and justice for all and reflects a new 21st century character for Palestinians and Israelis.
Sign Petition Here >>>
NEW TEAM PEOPLE FIRST VISION FOR OUR NEWLY CONNECTED 21st CENTURY
TIMES HAVE CHANGED!
It is time now for all of us to declare the antiquated 19th century European born Zionist colonial venture given to us by Austrian Theodore Herzl, British Lord Balfour and his Majesty’s British Government a noble effort with good intentions in its time but now a complete and utter absolute 21st century failure for all humanity in our time!
It is time now we collectively create a new vision for Israeli’s and Palestinians that incorporates all peoples and really makes it a promised land here on Planet Earth; a place…..
So sign and send this cyber message in a bottle and lets’ do this together!
Team People
Sign Petition Here >>>
ATTENTION READERS
Due to the nature of independent content, VT cannot guarantee content validity.
We ask you to Read Our Content Policy so a clear comprehension of VT's independent non-censored media is understood and given its proper place in the world of news, opinion and media.