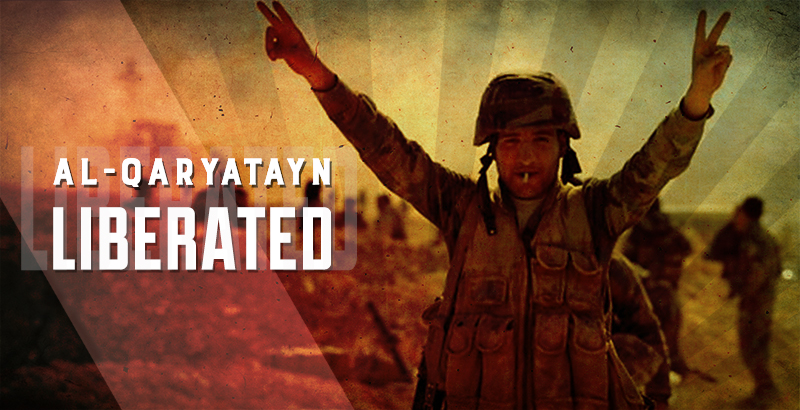 On April 3, the Syrian Arab Army liberated the strategic town of al-Qaryatayn in the Homs province. Initially, the SAA units advanced from 4 directions and secured the Northern and Western parts of the town. Then, following heavy clashes with ISIS, the loyalists took full control of the area. Al-Qaryatayn is located at the important crossroads which link the cities of Homs, Hama and Palmyra. Now, the SAA will likely advance on Ar-Rus Hills in order to fully secure the town’s eastern flank.

Some experts believe, following the liberation of al-Qaryatayn, the Syrian forces is ready to advance directly on al-Suknah. However, it’s more likely that the SAA and its allies will make an attempt to set a secure foothold for the future advances with capturing the mountains area north from Palmyra, and T3 Pumping station east from the ancient city. In other cases, the loyalists at the Palmyra- al-Suknah road will be vulnerable for ISIS counter attacks. Separately, a high concentration of ISIS militants have been observed at the Bir Qudaym-al-Suknah road. The Russian Aerospace forces will likely to intensify the activity in this area.

Heavy clashes are ongoing at the eastern and northern perimeter of al-Eis in southern Aleppo. The SAA and Hezbollah troops supported by Russian warplanes are seeking to enter the militant-held town. It’s confirmed that some 9 Hezbollah troops have been killed in the clashes. In turn, pro-government sources report a heavy death-toll among militants. In the recent days
Iraqi forces freed some 1500 prisoners from an underground jail run by ISIS during a battle for the town of Hit in the Anbar province, Iraqi officials reported on April 2. Last weekend, the Iraqi troops liberated 2 districts of the town from ISIS.

Separately, 60 ISIS militants have been killed during military operations in Iraq’s provinces of Nineveh and Kirkuk. Reports said 30 militants also died in airstrikes near the Nineveh’s Qayyarah oil field.