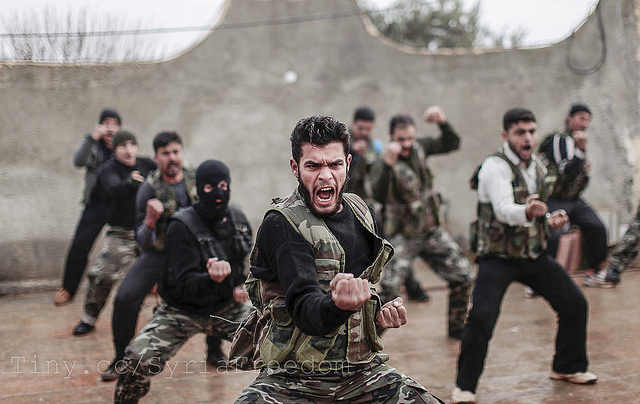 [ Note: You know what I am going to say. You just can’t make this stuff up. When I heard the number of a dozen or two it seemed even more strange. But on the surface they are claiming, vaguely that they will be.

There has been talk of these new trainees being forward observers for airstrikes, but that is what the Special Forces we have there are supposed to do. I don’t believe for a minute they are going to let a YPG or moderate rebel call airstrikes in.

One reason is they are already letting them do it with artillery support. RT had a great video showing some young YPG soldiers in their 20’s requesting fire suppot on notebook computers, being able to call the big guns in on one man infiltrators, a great morale builder for defenders.

That the US wants to support the YPG Kurds moving down to help take Raqqa makes sense, if it is coordinated with the Syrian Army coming in from the west and the south. Is the US goal to have a major base footprint there, and then have a confrontational position with the Syrians during the peace talk?

Will the Kurds really want to go to Raqqa when they are doing a key role in cutting off Turkish supplies prior to the Syrian offensive? Do they want to die fighting ISIL there, or live while watching the Syrians do it. We also have to be concerned that the US might be giving them “other training”, to do nasty things if they do not get what they want in the peace talks, like political assassination and car bombings, more mayhem for the poor Syrians.

The US has stopped accusing Russia of fighting the “moderate operation” as those who are really moderate have had an opportunity to join the ceasefire. And those who did not are fair game. The US has dragged its feet in working out with Russia at what point does a repetitive ceasefire violator get some fire put down on them, and obvious stalling effort by the US.

That said, Obama does seem to be giving Erdogan some strong hints that his continued support for ISIL is going to have repercussions. So far they have been the usual hints and babysteps. But Erdogan can see that southern, central and eastern Syrian are going to be cleared this Spring which will put most of the Syrian army focus back onto the north and the Aleppo area. Time is not on his side… JD]

The US military has reportedly restarted a controversial program to train and equip dozens of so-called moderate militants in Syria, just a year after acknowledging the program helped Daesh and other terrorist groups.

The Pentagon restarted the program after coming under fire just last year for admitting that much of the 500-million dollar effort to equip the trainees ended up in Daesh hands. The Syrian government has repeatedly said that the US is providing support to terrorist groups operating in the country under the guise of helping opposition forces. Up to 270 thousand people have been killed since the start of Syria’s conflict in 2011.