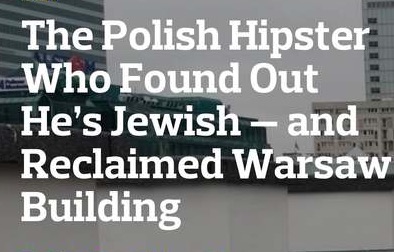 As you no doubt realise, yours truly is not a biologist or a genetic expert and is not qualified to address this question.

However, an examination of the above question from a Jewish cultural perspective leads to some fascinating observations.

Jews frequently delight in associating themselves with Jewish brilliance: with the likes of Albert Einstein or Steven Spielberg. Naturally, Jews are much less enthusiastic about any association with people such as uber-criminal Bernie Madoff or serial paedophile Jeffrey Epstein. Jewish tribalhood is an elastic concept.  Many Jews cling to biological determinism in the inheritance of Jewish talents but forcefully reject any biological cause in reference to any unsavory traits. Jewish folklore is wildly inconsistent in its biologist attitude toward the so called ‘Jewish traits.’

A few years ago,  American comedian Larry David produced a sophisticated and fascinating deconstruction of ‘Jewish biologism.’  In the fifth season of his TV Series, ‘Curb Your Enthusiasm,’ (2005) David tackles the subject of organ donation. Voluntarily presenting himself as the ultimate American eccentric and egotistical Jew, David is confronted with a serious dilemma. His best friend Richard Lewis (another Jewish comedian) suffers acute kidney failure. His survival is dependent on a kidney donation and, as you can predict, Larry David is a perfect match. David, who had until that point used his series to portray the definitive Jewish egotistical person of American popular culture, is reluctant to donate his kidney.

As the plot develops, David hires a private detective to discover who his real parents are and learns that he, David, was adopted. David meets his biological parents and discovers that he was not born a Jew. He was born a Christian of Scottish descent. David is very excited about his new ethnic identity and faith. Instantly, he becomes an empathetic person. His egotistic attitude disappears. He suddenly cares about others. He evolves into a sympathetic, boring, compassionate Goy. A few scenes later, David is attending Sunday services with his new ‘parents’ in their local Church. There he learns for the first time that ‘to give’ is ‘to receive.’

David doesn’t waste a second. He understands. He leaves the Church and takes the first plane to LA where he rushes to the hospital to give his kidney to his best friend. During David’s final preparation for the transplant operation, the nurse is overwhelmed by David’s devotion, kindness and conviction. Throughout this transition to Christianity, the Larry David that we see is the total opposite of the selfish Larry David we knew.

However, David’s heavenly inspired humanist metamorphosis doesn’t last long. As he is being wheeled into the operating room, already under heavy anesthetic, the private detective runs up to David. “Larry I made a mistake” he shouts, “you were not adopted.” In spite of the anesthetic, David immediately reverts to his prior self. David understands that he is a Jew. His Christian compassion evaporates instantly. His transition is inescapable: he is a Jew after all and Jews are not supposed to give their organs to others, not even to their best friends. David, who is now heavily anesthetized tries to resist, he wants to run away. But against his will, he is dragged into the theater.  He becomes a victim of his own temporary non-Jewish kindness.

Larry David’s message in the above episode is clear. Being a Jew is a state of mind. What seems to be David’s Jewish egotistical and narcissist collection of symptoms are neither biological nor genetic but a matter of Jewish identification. Jews, according to David’s Curb Your Enthusiasm,  are egocentric only because they identify with the ‘egocentric Jew.’

Larry David’s cultural take on the Jewish symptom received forceful support this week from The Forward. The NYC Jewish outlet brought to our attention the story of Krzysztof Gutkowski. “The Polish Hipster Who Found Out He’s Jewish-and Reclaimed Warsaw Building.”

Gutkowski was a hipster Goy until he discovered that he was a Jew, a revelation that made him instantly into a Zionist, Holocaust religion enthusiast and a well-off landlord.

“In recent years,” the Forward writes, “there has been an increasing number of stories about Polish Jews successfully reclaiming ownership of properties their families had owned before the Holocaust.” This is problematic because as the Forward admits; “to this day, some Poles are living in homes and apartments formerly owned by Jews, and they worry about the day when they may be asked to move out. This helps breed not only hostility but also anti-Semitism.” I am slightly disappointed with the Poles. One would have expected that unlike the Palestinians, Poles would look forward to being evicted by their new Jewish landlords.  The Forward reveals, “Polish media is now reporting more and more cases of assets being restored to Jews.”

Apparently Gutkowski is one of these new Jewish owners. He only discovered his Judaism a decade ago. “At the time, he was studying anthropology at the University of Warsaw and was interested in the city’s ‘alternative history.’ He was particularly drawn to the Jews who once filled the streets. When he told his mother about an article on young Poles who were rediscovering their Judaism, she took a deep breath and informed him that she was Jewish and her mother was a Holocaust survivor.”

Like Larry David who instantly transitioned into a new identity, Gutkowski was quick to buy into Jewish exceptionalism. “I was in shock, I felt like a chosen person,” he recounts.   Gutkowski searched for documents on his family at the Jewish Historical Institute, visited the Jewish cemetery of Warsaw looking for abandoned gravestones, and joined the local Jewish community.  Wealth was quick to follow. Gutkowski found that his Jewish ancestors had owned 62 Zlota Street, which has some 40 apartments and 80 tenants.

After becoming the property’s owner in 2014, Gutkowski discovered that the building is also a pilgrimage site for Holocaust tourists. Every day, hundreds of visitors fill the building’s courtyard and scramble to take pictures next to one of the last remaining remnants of the Warsaw Ghetto wall.

Was hipster Gutkowski’s transition into a tribalist determined by biology? I doubt it. It seems as if the lucky boy made a calculated choice based on identity. He doesn’t necessarily believe in God or want to study the Talmud. He clearly believes in the Holocaust and the property market.

The Forward and Haaretz (that initially published this story) were very excited by this little Jewish victory. In the Jewish universe claiming your ancestors’ property after 75 years is a kosher procedure. More so is claiming other people’s land  after 2000 years which seems to be most popular Jewish narrative ever.  Yet neither the Jewish Forward nor Haaretz nor any other Jewish institution seem to support the Palestinians’ right of return to their land, villages and cities. Apparently, within the Jewish universe, restoration is a Jews only procedure.

But there is a positive end to this ‘hipster’ tale for Jewish progressives.  Gutkowski doesn’t want to make aliyah.  “My grandmother could have left Poland and come to Israel, but she decided to stay…Today I honor her decision and feel that I also need to stay. The house (40 flats in the centre of Warsaw) is a prize for this choice,” he said.