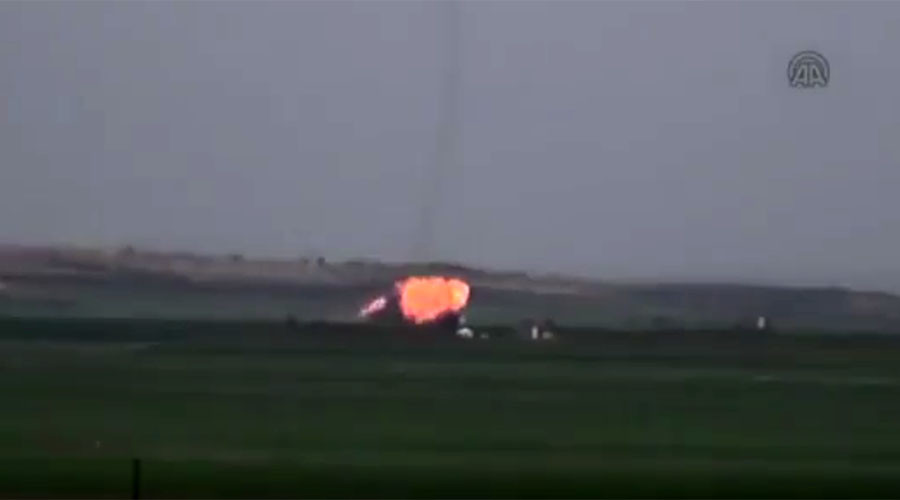 [ Editor’s Note: The story behind this story is what kind of missile was used to bring the plane down, how did it get into Syria, plus how many more might there be? Between Russian Intel and what the Syrians have on the ground, it seems strange they would have been using a piloted surveillance aircraft over an area where there was a threat of losing it.

The pilot looks like he is in his early 50’s. He is in for a bad time, but the jihadis might want to save him for a future trade. So far in the coverage I have not seen any focus on the munitions used, but if the bread crumbs flow back to Erdogan, what possible repercussions would there be for providing an officially-listed terror group with ground to air missiles?

If the Aleppo jihadis have them, you can assume that Raqqa and probably Deir Ezzor do also, but ISIL was not able to get them forward to Palmyra for use… or wanted to save them for themselves.

This shoot down comes after Lavrov was highlighting over the weekend Turkey’s continuing support of the terrorists and saying “more needed to be done”, a barb pointed at the US, but who may be powerless to stop Erdogan from doing it… Jim W. Dean ]

A Syrian Su-22 jet has been shot down by a surface-to-air missile in Aleppo Province. The pilot ejected and was reportedly captured.

“The plane wasn’t striking any targets, but was carrying out airborne surveillance. It was hit by a surface to air missile to the south of Aleppo, and now we’re looking for the pilot who ejected from the aircraft,” Syrian Army press service head General Samir told RT on the phone.

The pilot of the downed plane has been taken by Al-Qaeda-affiliated Al-Nusra Front to one of its bases, according to a rebel source cited by Reuters.

Video has surfaced on social media reportedly showing the moment of the pilot’s capture.

Photos supposedly showing the pilot have also appeared, the comments suggesting he is alive.

The ceasefire in Syria was introduced on February 27. It doesn’t apply to Islamic State (IS, formerly ISIS/ISIL), Al-Nusra Front and other organizations designated by the UN’s Security Council as ‘terrorists’.

The cessation of hostilities deal has been struck by the Russian ceasefire center at the Khmeimim Airbase in Latakia province, and the US coordination center in Amman in Jordan.

On March 14, Russia announced that it was withdrawing the majority of its forces from Syria, as the five-month operation neared its goals.

A total of 97 armed groups operating in Syria have agreed to the ceasefire. Both IS and Al-Nusra Front jihadists have been intensifying their military action in Syria recently, especially in Aleppo province. The ceasefire has been violated at least 250 times since it began, the head of the Russian center in Khmeimim, Sergey Kuralenko, said late last month.