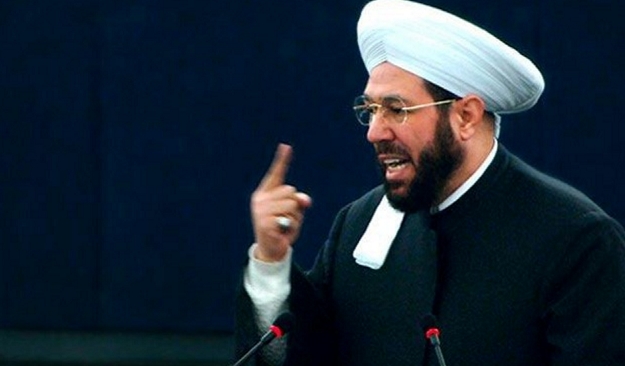 Syria’s Grand Mufti Sheikh Ahmad Badreddin Hassoun says Damascus has been repeatedly offered a deal according to which the militants would cease their hostilities against the government if it made concessions to Israel.

Since the outbreak of the foreign-backed militancy five years ago, the Syrian government has been receiving offers to make a tit-for-tat deal to end the crisis, Hassoun said in an interview with the Lebanese al-Mayadeen TV channel.

Since 2011, “we have been receiving unofficial offers to make a deal that would end it: ‘If you announce you would end hostilities against Israel and if you expel the Palestinian resistance from your territory and cut your relations with Hezbollah, we would stop fighting against you.”

The grand mufti lashed out at militant groups fighting against the Damascus government, saying they serve the joint Israeli-Western bid to ruin Syria.

“While previously it was France and Britain who divided Sham (Greater Syria) according to ‘political borders’, those who hit Sham today are Muslims who lost their mind and decided to prevent it from becoming a starting point for the liberation of al-Quds (Jerusalem),” Hassoun stated.

The senior Muslim cleric said the foreign-sponsored Takfiri groups who are killing Muslims in the name of God “do not understand that they serve the interests of Israel.” He further called on those who join militant groups operating in Syria to go to Palestine to fight the Tel Aviv regime instead.

Referring to Takfiris, Hassoun said “40,000 Muslims from Europe are fighting in Syria. Why do none of them go to fight in Palestine.”

Critics say European governments are to blame for their lax control over the past years on the movement of their nationals into Syria and Iraq. They say militants would pose serious huge security threats to Europe when they returned home.

Those fears have come true after terrorist attacks in Paris and Brussels killed nearly 160 people.

A new report by the Hague-based International Center for Counter-Terrorism said French, Germans and Britons make up the highest number of foreign militants from European countries in the ranks of armed groups in Syria.

On Monday, French Prime Minister Manuel Valls said adherents to the radical Saudi-backed Salafi ideology have gained the upper hand in France as they push to attract followers.

Salafism is often equated with Wahhabism, the radical ideology dominating Saudi Arabia and freely preached by clerics in the Arab country.

Wahhabism is also the ideology of the ISIS terrorist group, which claimed responsibility for last year’s deadly terrorist attacks in the French capital, Press TV reported.