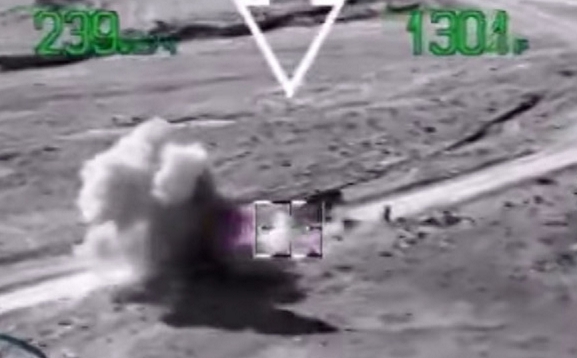 Video published by Rokossovskiy Konstantin. © YouTube / YouTube
Newly-released videos depict the hunt of Russian Mil Mi-28NE Night Hunter helicopters after vehicles of Islamic State forces in Syria. Some of the videos were posted by Dmitry Rogozin, deputy prime minister in charge of the military industry.

The Mi-28NE reportedly use Ataka (NATO designation AT-9 Spiral-2) anti-tank guided missiles with shaped charge warheads, designed to eliminate armored vehicles; the pickups and trucks of the Islamic State (IS, formerly ISIS) terrorists are pierced through. A number of people can be seen running away from the vehicles in the midst of an attack.

As seen on video, pilots do not target fleeing terrorists.

The targets are engaged from various distances, sometimes well over 5km away, with speeds of the aircraft exceeding 200kph.

On some videos it is clearly visible that terrorists are firing at the helicopters with automatic weapons, though incapable of damaging the armored ‘flying tanks’, which can withstand hits from 12.7mm bullets.

Rogozin also tweeted a couple of videos of Mi-28NE eliminating stationary targets, a terrorist stronghold and a building with terrorists sheltering inside.
The nature of the explosions attest to the fact that the pilots opted for 9М120F missiles armed with combined effects, high-explosive fragmenting and thermobaric ordnance.
Mil Mi-28NE Night Hunter helicopters operating in Syria are all equipped with the latest versions of electronic warfare systems that easily suppress guidance system of anti-aircraft MANPAds, be they Soviet-made Strela-2 and Igla-1, or Chinese HN-5, all of which are reportedly in the possession of the jihadists.