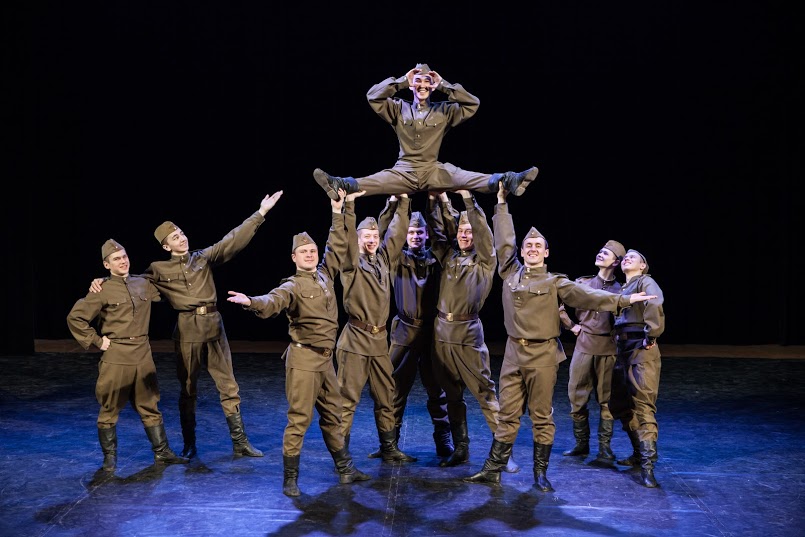 Dances and Songs from St. Petersburgh

On March 26, 2016 we saw this magnificent production, Les Choeurs de l’Armée Russe (The Choirs of the Russian Army) Dances and Songs from St. Petersburgh two hours long with an intermission, at the large theater of the Palais de Congrès de Paris. The cast  comes from St. Petersburgh which is known as the Venice of the North.. This is top class entertainment that can be understood by those who know Russian and those who do not know a word of the language.

As the performance began, we saw an orchestra dressed in military gear. We heard the great voices of the choir and the soloists. There were 60 dancers from the St. Petersburgh Ballet Theater Company who performed.

The  outstanding cast  and choreographers  included:

The orchestra performed with enthusiasm and the music was exceptional. The choir sang  Russian songs  with dynamism. Male soloists dressed in white military uniforms  with great voices sang traditional songs.  Dancers performed  folk dances and a choir interpreted the songs most known in Russia and also some French songs  The dancers wore magnificent colorful costumes. Both the traditional dances and ballets were performed  gracefully. Especially interesting  were traditional dances by men only and also by both men and women and some acrobatics performed by male dancers.

The crowd was enthused and  clapped in rhythm to some of the songs and dancers. It was magnificent to see  the dancers in so many different traditional colorful costumes.

This play can be enjoyed with friends or as a family. Since 1997, the group has been performing in many countries of the world including Spain, Portugal, France, USA, China, Finland, Norway, Serbia, Poland and Sweden to full houses.

This magnificent performance has a good effect on the audience as they leave appreciating having seen world class entertainment.