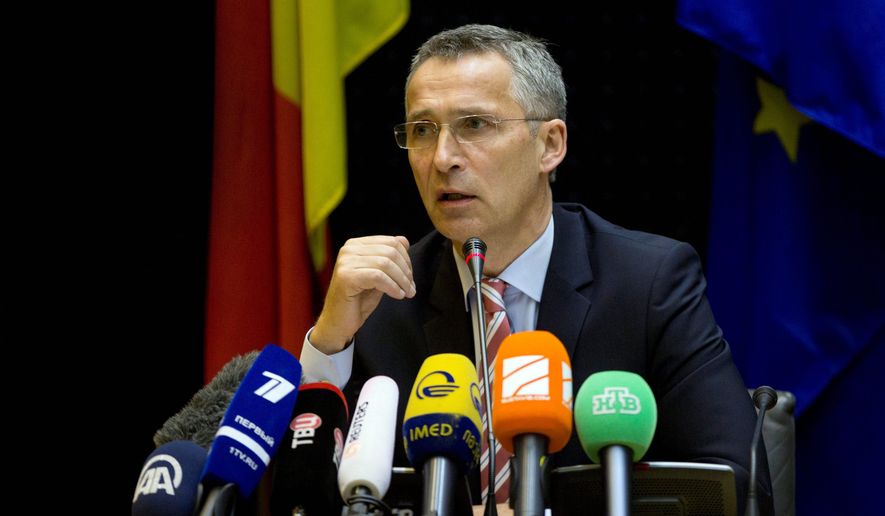 [ Editor’s Note: We are pleased to see some shift in NATO’s rhetoric on what it shamelessly hyped as a growing threat from Russia, when it was clearly responding to aggressive moves from the West. The phony Iran nuclear program scam, which was used to justify building the missile defense shield, was step number one.

We knew that was a lie from day one when Russia was accurately claiming that it was aimed at Moscow. Then we have a major offensive move with the violent Western coup in Kiev — as clear an act of war if there ever was one, and where NATO was involved up to its eyeballs.

Then when it failed — meaning the coup could not impose itself over the entire country, which historically has always been deemed a failed coup — Kiev and its Western backers began a terror war on Donbass, which the Crimeans avoided by making a timely defensive move to reunite with Russia in one of the most overwhelming votes in modern history.

Russia always played it cool on being stiff-armed by the NATO council, knowing the day would come when talks could begin. The Ukraine coup is an abject failure, and the West is on the hook for billions of bad debt that will never be paid.

Despite having a defense budget one-tenth the size of the US and NATO, Russia has demonstrated that it has focused all of its military budget on real defense and counter terrorism.

It stands head and shoulders above the pretenders, who are going to pretend that they have not been caught in their false threat scam.

But is it time, and it is our role to counter attack NATO through our respective representation by insisting on an international blue ribbon security review of NATO’s participation in the mountain of lies poured out onto the public to justify its abrogation of the European balance of force agreements that so much work went into.

Those collective security agreements were subverted, and those involved in that process must now be put under the spotlight for the threat they have revealed themselves to be. They are vulnerable. The question for us now is can we put together the international coalition needed to push this forward, when the guilty will block the effort every way that they can? … Jim W. Dean ]

Seemingly shifting the tone of the usual “Russian threat” rhetoric, NATO chief Jens Stoltenberg told reporters in Washington the alliance is seeking talks with Moscow. It comes just a day after Stoltenberg singled out Russia out as the bloc’s top challenge.

In the aftermath of Crimea’s accession to Russia – or, as the Western governments keep insisting, its “annexation” – NATO suspended all military cooperation with Moscow.

But now, NATO and Russia are in discussions to settle on an agenda for a new meeting, according to the alliance’s Secretary General Stoltenberg. The meeting will take place through the NATO-Russia Council.

The central goal at this point is to settle on an agenda. “And we are in the process of discussing that with the Russians, and hopefully we’ll be able to agree on the agenda and then to convene a meeting,” Stoltenberg said during an Atlantic Council speech.

“The [NATO-Russia] Council has never been suspended. Actually we had two meetings in the council after the annexation of Crimea. So the whole idea is that practical cooperation has been suspended, political dialogue has been in place,” Stoltenberg claimed.

The council was set up in 2002 to create a forum for dialogue on security issues between NATO members and Russia.
Over the past couple of years, the Russia-NATO Council has suspended meetings due to strained relations after the Ukrainian crisis and NATO’s allegations of Russia’s involvement in the war in Donbass.

Moscow has dismissed the accusations, while NATO has singled out Russia as a collective defense threat and has argued for the expansion of its military presence around the eastern borders of the alliance.

While not fundamentally changing his stance on Russia and Ukraine, Stoltenberg somewhat softened the rhetoric, saying that NATO does not see “any immediate threat” in Europe, including on its Eastern European borders.  He was responding to a question on whether Russia poses any “real” threat to the alliance.

“NATO is not looking for a confrontation with Russia. We will avoid a new Cold War. We are counting on a dialogue with Russia,” he added.

This comes in stark contrast to Stoltenberg’s comments just a day earlier, when he listed Russia as the alliance’s main challenge following a meeting with US President Barack Obama.

“Together, we are now implementing the biggest reinforcement through our collective defense since the end of the Cold War,” Stoltenberg said.

Moscow has repeatedly criticized NATO’s creeping expansion in Eastern Europe. In a recent statement, Russia’s permanent representative to NATO, Aleksandr Grushko, said that the alliance’s expansion contradicts the spirit of international treaties on mutual relations and military activity, which state that the Western military bloc is not to permanently station additional forces near Russian borders.

“We are not passive observers, we consistently take all the military measures we consider necessary in order to counterbalance this reinforced presence that is not justified by anything,” Grushko said.

Grushko also exclusively told RT he believes the recent anti-Russian rhetoric was serving to “breathe new life into NATO,” as the alliance is failing to respond to the modern security environment and “combat threats such as terrorism, migration and many others.”

Instead of this, the US is trying to “further strengthen its hegemony in European affairs and at the same time to drive a wedge between Europe and Russia.”