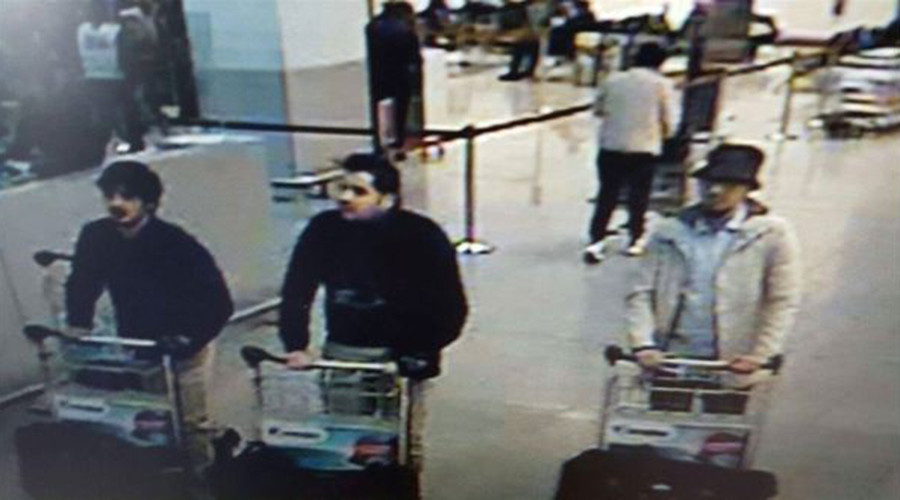 [ Editor’s Note: This is a true, and a “not true” story. The project itself was for real, but the posing that the technology was new is not true. Spectrum analysis has been a widely-used tool for some time; we have people at VT who had clearances to market it.

But, you have never seen much in the media about it, right? One reason is that “they” did not want the bad guys to know about it, as they are easier to catch when not taking counter measures.

Similarly “they” hid facial biometrics, how accurate it had become, so that people would not hide their faces more for the HD cameras. And yes, these were at the airports on 9-11, and if you remember, “they” never showed any pictures of them.

Israel, on the other hand has used all of this stuff for a long time. When you drive into Ben Gurion or are getting out of your car, “they” are running biometrics on you before you ever get to the door, as once you get inside could be too late, as you can just do what the Brussels guys did — go stand at a busy check in line and set your bags off… or leave your bags while telling someone you have to go pee.

For those of you who are racing a bit ahead of me, the answer is yes… one of the reasons this was not wanted to be deployed was that it took away the ability of certain parties to do bombings when they wanted to, or I should say “let them happen”.  Why do you think Israeli security has so many airport contracts?

Do you think that Ben Gurion’s good reputation might have had something to do with that? Have you noticed not seeing anything in the coverage on the Brussels attack about who held the security contract for the airport?

Do you not think “they” have had this technology and used it in airports where they have contracts, but kept it quiet maybe, so they could be a filter to let some pass, while others are caught.

With this technology having been around for a good while, how many news stories have you heard about where it busted up bombing attempts, when that would have been fabulous advertising for the technology holders.

And last, if an advanced spy satellite can sit over the vents of an underground nuclear facility and tell immediately if they are making weapons grade material, how good could the technology be in detection of bad things, say at 100 yards?

I think you are getting the picture.

Gordon will add more to that, as he knows more than I do… not having the clearances. But yes, they have lied to us once again.

Russia’s permanent representative to NATO Aleksandr Grushko has confirmed that a Russia-NATO joint anti-terror project may have been able to stop the attacks that hit Europe in recent months if the program hadn’t been scrapped by the alliance.

“This was a multinational project. It was aimed at preventing terrorist attacks in public places. Full-scale tests that had been carried out in one of the NATO member states showed that if the project had been completed…it would have let us prevent such situations as occurred at Brussels’ airport and metro to a significant extent,” said the diplomat, confirming media reports.

Earlier, a source told TASS that the joint STANDEX (Stand-off Detection of Explosives) project – which was designed to “detect explosives remotely in real time in public places, in the first turn, on public transport systems, metro stations, airports and railway stations” – was based on sophisticated technology which allowed the precise location of bombs planted in large crowds. The system used spectrum analysis of microparticles in the air, and provided the identification of both the presence of explosives and the pin-point location of the person in the crowd.

“One of the key technologies employed in the system was developed by Russia,” said Jamie Shea, NATO’s Deputy Assistant Secretary General for Emerging Security Challenges back in 2013, as cited by TASS.

According to the source, the technology was successfully tested in a Paris underground station on October 2013 and was supposed to be brought onto the market in the fall of 2015.

At the time of the test, NATO hailed the project, saying that it”could help NATO Allies and Russia prevent terrorist attacks such as those carried out on the public transport systems in London, Madrid and Moscow,” while describing it as a “human challenge rather than technological or political: it meant bringing together some very diverse skills and cultures to form a close-knit and committed team,” according to the press release.

The first sample of the system was to be installed in late 2015-early 2016 at Brussels Airport, close to NATO’s headquarters, according to the source.

“This system would have allowed to secretively identify the Brussels terrorists on March 22 immediately upon their arrival to the terminal,” he said.

The project, which was officially launched in 2010 by the NATO-Russia Council, saw experts from French, German, Dutch, Italian and Russian research institutes engaging in its development and testing.

Its final tests were reportedly scheduled to take place in St. Petersburg in the fall of 2014, but the project, which cost an estimated €4.8 million (US$5.4 million), was scrapped due to the sudden cooling in NATO-Russia relations triggered by Crimea’s reunification with Russia.

Following the Crimea referendum, which saw an absolute majority of citizens vote in favor of reuniting with Russia, NATO suspended all cooperation with Moscow, condemning the events in Crimea as “military intervention.”