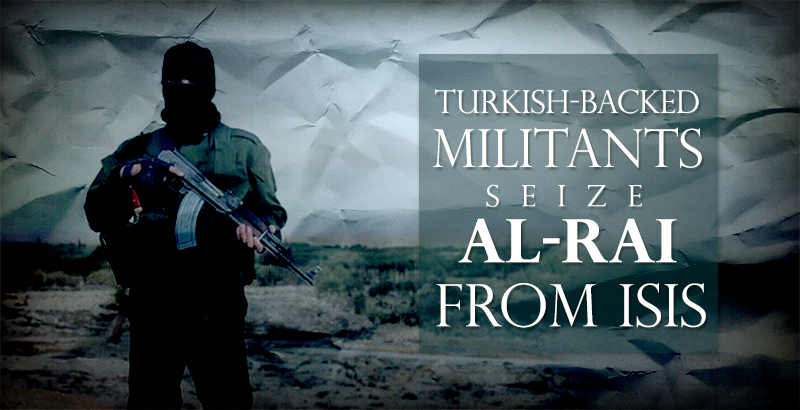 The Hawar Kilis Operations Room – a coalition of U.S. and Turkey backed militant groups, including Sultan Murad Division, Faylaq al-Sham, and the Al-Moutasem Brigade – seized the ISIS-held town of Al-Rai in Northern Aleppo on April 7. Al-Rai serves as an important logistic hub for illegal cross-border smuggling of foreign fighters and supplies to Syria. This advance is a part of the ongoing offensive along the Syrian–Turkish border that reportedly seized some sixteen villages from ISIS since March 31. Turkey has intensified its provision of weapons, cross-border artillery fire, and other forms of support to militants in a likely attempt to preclude further gains along the border by the Syrian Kurdish YPG.

There is no confirmed information about role of Al-Nusra-affiliated units in this advance. Nonetheless, it’s widely known that the so-called “moderate opposition” in Northern Aleppo often operates in serried ranks with Al Nusra militants.

Militants shelled the YPG-controlled district of Sheikh Maqsood in Aleppo City with artillery shells allegedly containing chemical gas on April 7. 9 civilians were reportedly killed and 29 injured as result of the shelling.

The Syrian Democratic Forces (SDF) and the Kurdish People’s Protection Units (YPG) are preparing to launch a large-scale operation to liberate the city of Manbij which serves as a major stronghold for the ISIL in Northwestern Syria, and is an intersection of several major highways, including M4.

In the province of Latakia, The Syrian Arab Army and its allies reportedly seized back Rasha heights near the strategic town of Kanasba from militants last night. Separately, the Syrian forces’ artillery units hit the militants positions in Badama and al-Hanboushia areas.