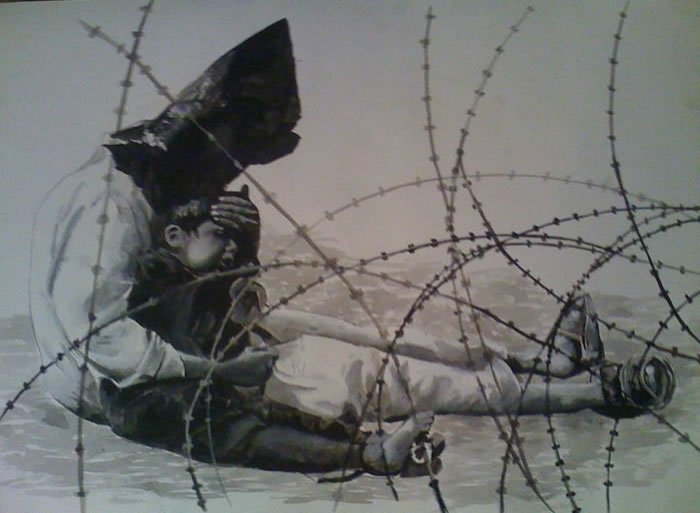 It has been a while since I heard the word “CACI,” and I had kind of forgotten the role they played in the US war in Iraq. CACI is a US corporation based in Arlington, Virginia. In the wake of George W. Bush’s invasion of Iraq in 2003, it became a US civilian contractor, presumably for the purpose of providing security and carrying out “intelligence analysis,” but in reality, its employees worked as prisoner interrogators at Abu Ghraib.

In the video above, we see Eric Fair, a former CACI employee, discussing his experiences in Iraq as well as a new book he has written. Fair says it was “rumored” that US Army interrogators had been trained by Israelis, particularly in the use of a torture device known as the “Palestinian chair.” He says he saw the chair in use, and actually, on one occasion, sat in one himself–just to see what it was like. As he relates, it was not a pleasant experience.

CACI is still around today, and on their website they promote themselves as a company having “a culture of good character.”

“Good character defines who we are, how we act, and what we believe is the right way to do business,” the site insists, and goes on to add:

Our company was founded in July of 1962 by two extraordinary individuals: the late Herb Karr, a practical and visionary businessman, and Harry Markowitz, a programming genius. These entrepreneurs took an unsupported public domain software language, realized it presented a promising business opportunity and created a company to train and support its users. In a very short time Herb and Harry went from doing business on a park bench to launching a successful venture in the nascent computer industry.

So here we have a company founded by two Jewish men and which later went on to supply interrogators at Abu Ghraib.  Somehow, the fact that the US would adopt torture techniques perfected by Israelis doesn’t surprise me, and in thinking about CACI I’m reminded also of another Jewish firm–NUMEC.  Founded by Zalman Shapiro just a few years before the “extraordinary” Messrs. Markowitz and Karr gave rise to CACI, NUMEC, as it happens, played a crucial role in Israel’s atomic bomb program, this by accidentally “losing” 337 kilograms of US weapons-grade uranium from its plant in Pennsylvania.

All things, of course, whether good or ill, have a cumulative effect on a nation’s soul. From a country founded upon the principles of equality, we have become a global mob boss, assuming to ourselves such prerogatives  as “extraordinary rendition” (to the abetment of our “extraordinary” business leaders, naturally), “enhanced interrogation techniques,” and similar lawless measures–much as if we regard ourselves as “chosen” and feel we owe no apologies or explanations to anyone for our behavior.

And now here we are making use of a torture device known as a “Palestinian chair.”

I wonder where all these superlative national traits came from.

Perhaps at some point, the Israelis will come out with an “American chair” for groveling US politicians to sit in. Maybe it’s already in design.

Richard Edmondson is an author, novelist, poet, and journalist whose writings often focus on Middle East issues, the Zionist lobby, and religion. His latest novel is The Memoirs of Saint John: When the Sandstone Crumbles, a story about an archaeological team doing a dig in Syria and set amidst the current conflict in the country.

In 2014 Richard attended an International Conference on Combating Terrorism and Religious Extremism, held in Damascus. The book is part two in the Memoirs of Saint John series.

Two other books by Richard are Rising Up: Class Warfare in America from the Streets to the Airwaves, relating his experiences founding and operating an unlicensed or “pirate” FM radio station in San Francisco in the 1990s, as well as a volume of poetry entitled American Bus Stop: Essay and Poems on Hope and Homelessness.

Richard is cognizant of the words of the early Christian writer Tertullian, who in the second century-basically prognosticating the fall of the Roman Empire-wrote: “We have made merry amid the ludicrous cruelties of the noonday exhibition.”

richardedmondson.net
ATTENTION READERS
Due to the nature of independent content, VT cannot guarantee content validity.
We ask you to Read Our Content Policy so a clear comprehension of VT's independent non-censored media is understood and given its proper place in the world of news, opinion and media.