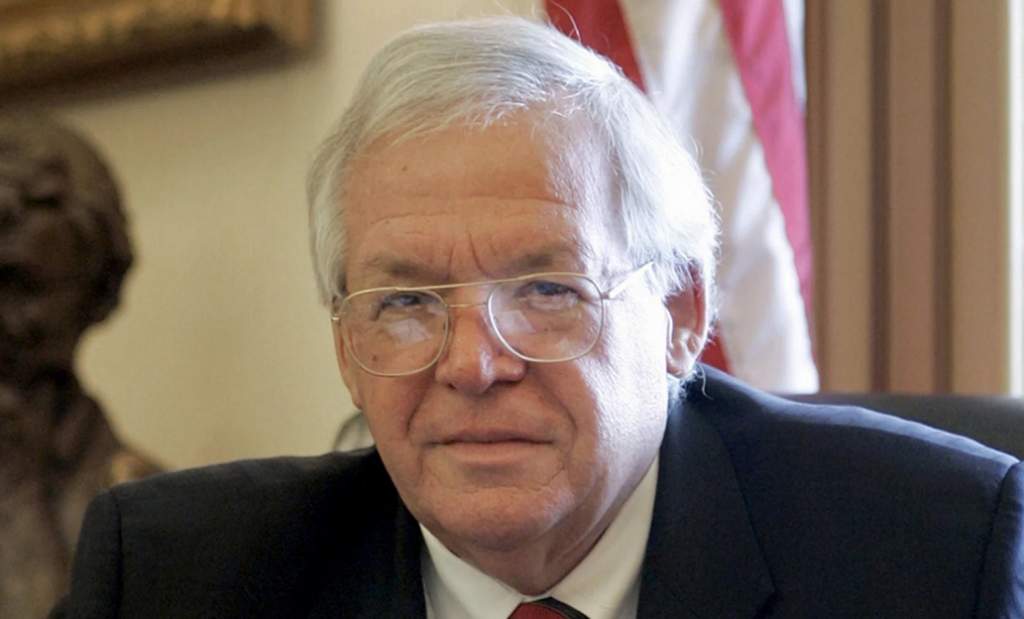 [ Editor’s Note: The elephant in the room that no one is asking about is with Hastert having to shell out all this cash to his abuse victims what other compromises did he make to get this money where the American people were added to his list of abuse victims.

And so far we have not heard a word about Hastert only being the tip of the iceberg, and the failure of law enforcement to stop the widespread child abuse that is well known in high political, business and even military circles… Jim W. Dean ]

Dennis Hastert, the former US house speaker, molested four boys while working as a high school wrestling coach, prosecutors have said. Hastert agreed to pay one of his victims, who was aged 14 at the time of the abuse, $3.5m, court filings show. He was not charged with abuse because statutes of limitation had expire.

–
The court document is the first time prosecutors have confirmed Hastert, who worked as house speaker from 1999 to 2007, paid money to conceal sex abuse. It chronicles a chain of deception that began with Hastert exploiting his position of trust as a teacher and coach and carried on years later to include lying to bank officials and making false claims of extortion to the FBI to conceal his wrongdoing.

The filing recommends that a federal judge sentence Hastert to up to six months in prison for violating banking laws as he sought to pay one of his victims, identified in court documents as “Individual A”, to ensure the person kept quiet.

The sex abuse allegations date to Hastert’s time at Yorkville high school in the Chicago suburb of Yorkville, from 1965 to 1981.

“While defendant achieved great success, reaping all the benefits that went with it, these boys struggled, and all are still struggling now with what defendant did to them,” the filing reads. “Some have managed better than others, but all of them carry the scars defendant inflicted upon them.”

Prosecutors say Hastert still was abusing boys when he first decided to run for office, but the now 74-year-old Republican managed to keep any hint of sexual misconduct quiet throughout his political career, which spanned the Illinois legislature to the Congress and eventually to the speaker’s office, where he was second in the line of succession to the presidency.

Hastert, who plead guilty in October to breaking banking laws, is scheduled to be sentenced on 27 April. The defense has asked the judge to give Hastert probation and spare him prison time, citing his deteriorating health and the public shame he’s already suffered.

Individual A is one of at least four people cited in the filing as saying that Hastert sexually abused them as children. Three were wrestlers and the fourth was a student-manager on the team Hastert coached. Another wrestler said Hastert touched his genitals while he was on a locker room massage table, but he wasn’t sure if it was intentional.

Prosecutors say in the filing that Hastert’s known sexual acts against Individual A and other accusers consist of “intentional touching of minors’ groin area and genitals or oral sex with a minor”.

According to the document, Individual A told prosecutors the abuse occurred in a motel room on the way home from wrestling camp. Hastert, the only adult on the trip, told the 14 year old that he would stay in his room while about a dozen other boys stayed in a different room.

Individual A said Hastert touched him inappropriately after suggesting he would massage a groin injury the boy had. The other former wrestlers told prosecutors Hastert touched them in the locker room at Yorkville High, after saying he would give them massages. Two of those wrestlers, who were ages 14 and 17, say Hastert performed sex acts on them.

The student-manager was Stephen Reinboldt, who died in 1995. His sister, Jolene Burdge, told the Associated Press that her brother had said the sexual abuse lasted throughout his time at Yorkville.

In their filing, prosecutors wrote that Hastert’s “history and characteristics are marred by stunning hypocrisy”. He made his victims “feel alone, ashamed, guilty and devoid of dignity”, they said.

Comedian Andy Richter, who graduated Yorkville in 1984, recalled on Twitter that the wrestling coach would put a chair within sight of the showers to watch the boys.

“I remember this chair,” he wrote, saying that Hastert told theim he watched “purportedly ‘to keep boys from fighting’”. “I haven’t thought of this in 30 years,” he added. “I don’t find it’s upsetting me now. I’m just so struck by how easy it was to do that. Nobody questioned it.”

Prosecutors noted the statute of limitation on any sex-abuse charges have long since expired, making banking charges the only ones they could pursue. “The government seeks to hold defendant accountable for the crimes he committed that can still be prosecuted,” the filing says.

The case has been shrouded in secrecy since Hastert was indicted in May 2015. Prosecutors only confirmed at a March hearing that sex-abuse claims were at its core.

Hastert’s fear, prosecutors said Friday, was that if he didn’t pay Individual A “it would increase the chance that other former students he molested would tell their stories”. Burdge had already confronted Hastert at her brother’s funeral and he could see “she had been deeply affected by what defendant did to her brother, and she was likely to tell her story publicly if anyone would listen.”

Court records say Hastert managed to pay $1.7m to Individual A, handing it over in lump sums of $100,000 cash, starting in 2010. The payments stopped late in 2014 after FBI agents questioned Hastert about his cash withdrawals. Prosecutors said on Friday that it was a bank compliance officer who spotted the huge withdrawals.

Pressed about the withdrawals, Hastert gave various explanations for what he was doing with the cash – that it was for vintage cars and for stocks, that he didn’t trust the banks – before he claimed he was be being extorted by someone he said was making a false sex-abuse claim.

Hastert agreed to let investigators record phone conversations he had with the man, and prosecutors concluded the man’s tone and comments “were inconsistent with someone committing extortion”.

Days after pleading guilty, Hastert entered the hospital and nearly died from a blood infection, according to his lawyers. They also say he had a stroke and required in-home care.