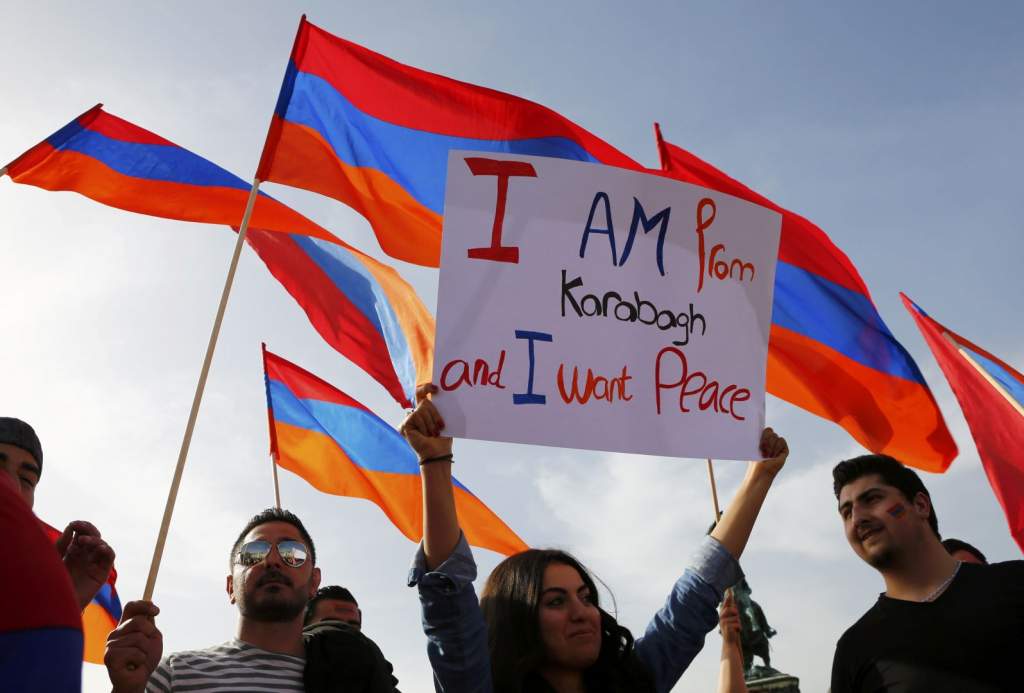 “The Turks have passed by here; all is in ruins and mourning.“ – Victor Hugo, 1880, Balkan liberation wars

[ Note: The ceasefire seems to be holding, except for some occasional sporadic fire. It does not appear that outside “spoilers” have infiltrated the war zone to trigger more fighting by firing on both sides, an age old scam. We will now see if the diplomats can have some serious discussions to get everyone to put the guns down and negotiate a lasting peace deal. Life in that area is tough enough without a war going on… JD ]

Just when Azerbaijan seemed ready for an all out assault on Nagorno-Karabakh the war train came to a screeching halt. Both sides quickly agreed to a ceasefire, a verbal one that was holding as of early Wednesday. Artak Beglaryan, spokesman for Karabakh’s prime minister reported, “There is zero fire from both sides”, but there is no written agreement yet.

Azeri President Aliyev responded with, “We want a continuation of talks”, while Armenian president Sargsyan is heading off to Germany, the current chairman of the OSCE, for consultations.

No clear evidence appeared as to who put their foot on the brake. Outside pressure is the number one suspect, and that surely did not come from Turkey who was openly backing Baku from day one.

But Armenia’s Defense Minister Seyran Ohanyan confirmed that Russia had been the mediator, which was not a big surprise due to its having strong relations with both sides. The two sides had met in Moscow on the 5th. Putin afterward had been on the phone with both sides urging them to guarantee the ceasefire, but it seems the announcement had been delayed to make sure both sides had stopped firing.

Turkey on the other hand got more bad press from the reports that it helped 60 to 70 Azeri ISIL terrorists in Syria to transit Turkey back home to kill Armenians for a change. That made me think back to the horrible photo I saw of the elderly Armenian couple shot dead in their home with their ears cut off. Grandpa still had his walking cane in his lap.

The American Congress weighed in on the conflict with members of the House Select Committee on Intelligence, Republican chairman Devin Nunes and the ranking Democrat Adam Schiff, condemning Azerbaijan’s initiating the attacks. The Armenian National Committee of America has called on the US to release its signals intelligence to confirm who started the current fighting, a strong indication that Armenia does not fear getting any bad news.

It had not taken long to smell a rat on this story. Question number one in these out of thin air conflicts is “why now”? And the answer I would pose to that is Russia is on a diplomatic roll and Turkey on a slide, so someone decided to put Armenia in play to possibly force Russia into support it militarily and then being declared an aggressor.

There were two big clues for that. Number one, Armenia needed to start this fight like it needed a hole in the head. It has nothing to gain with a 2 million population going up against 10 million Azeris, plus Turkey, who would love to humiliate a close Russian ally, despite Azerbaijan also having had close relations with Moscow, and also being an arms customer.

But clue number two was laid squarely on the table when the Azeri ambassador to Russia, Polad Bulbuloglu stated,

“We are ready for a peaceful solution to the issue. But if it’s not solved peacefully, then we will solve it by military means.”

This was followed by the announcement if an Azeri military offensive that Armenia said might push 150,000 out of the contested region.

Armenia responded by rushing completion a mutual assistance agreement with Nagorno-Karabakh, while Baku had upped its ceasefire demands to “liberating the occupied territories and restitution of the territorial integrity of Azerbaijan”, thus showing everybody why it started the conflict.

The conflict’s roots run deep, with the gene pools running back to the Bronze, and even the Copper Ages. In a strange twist of fates, while Khrushchev had once given Crimea to Ukraine, Stalin had promised Nagorno-Karabakh to Armenia in 1921, sowing seeds of contention that we are witnessing today.

Since the 1994 ceasefire, OSCE efforts to mediate a permanent solution have gone nowhere, and Russian attempts to insert peacekeepers between the parties have been rejected by both sides. I was surprised to discover the Global Militarization Index showing both Azerbaijan and Armenia among the top ten militarized countries in the world.

If it came to a knockdown drag out fight, things would not look good for Armenia in terms of defending Nagorno-Karabakh, as their respective military budgets run $447 million and $3.7 billion. Baku has been expanding its military heavily in the last few years and would have an advantage in heavy weapons. It could take the disputed area back, if it wanted to.

And it seemed like it did from some of the signals being sent out by Baku. Last August, President Aliyev tweeted that “the flag of Azerbaijan will fly in all the occupied territories”. With the economic distress caused by lower oil prices, taking back Nagorno-Karabakh would buffer Aliyev through to better times, politically.

Turkey was quick to support Baku, and the timing of this renewed conflict came during NATO naval exercises in the Black Sea. In fact, one Veterans Today source noted a surprise stop by a Turkish warship TCG Yavuz (F-240) at the southern port of Batumi in Georgia. That is something not usually done during a naval exercise, unless maybe something is being transferred, like weapons possibly.

Not only has Russia not taken a side, but actually stepped back, refusing to comment about the possibility that Baku might have active support in the conflict at this time from Turkey. Lavrov (whose father was Armenian) said,

“We are not accusing any external forces and any external players of provoking the current outbreak of tensions (in Nagorno-Karabakh). Nor do we accuse Ankara.”

He then went on to say that he was more concerned with Turkey’s behavior in Syria as it continued its support of the terrorist groups during the ceasefire.

Was Lavrov sending a message to Erdogan that he would not be taking the bait to get Russia militarily involved in preventing Nagorno-Karabakh being retaken? It would not affect Russia’s two bases in Armenia, nor its four to five thousand troops.

Although Armenia is a military ally of Russia that does not technically cover Nagorno-Karabakh. Baku and some outside party may have seen this as the perfect time to settle the issue by force of arms — a dangerous precedent to set in the area. Russia’s State Duma Vice Speaker Serget Zheleznyak felt that there was a third force behind the current fighting.

“It is clear that the force that continues to fan the flames of war in the Middle East, Central Asia and the Caucasus dissatisfied with the peacekeeping and counter-terror success of Russia and our allies in Syria is interested in the speedy exacerbation of the protracted conflict in the Nagorno-Karabakh region.”

But the clock had ticking towards a full scale conflict as both sides continued to claim the other would not stop shelling, which served Baku the most. Its defense ministry had ordered full mobilization of the Azeri heavy weapons to prepare for a strike on Karabakh’s two main cities.

That would have been the tipping point, as Armenia has threatened “a major response”, which is exactly what Baku may want it to do for a full engagement.

Turkey is exhibiting situational ethics here. On the one hand, it seems to see no problem with its supporting Turkmen forces fighting Assad in Syria, in alliance with al-Nusra and ISIL, as it wants a buffer zone to neutralize the Syrian Kurds. But then Turkey supports Baku taking back Karabakh to restore the former Azerbaijani borders, and to hell with the issue of it always having had a large ethnic Armenian majority.

Erdogan said, “I want to say that Nagorno-Karabakh is sure to be part of Azerbaijan someday”, but then he is adamant against Syria bringing all of its parts together that had been torn apart during the terror war waged in it. I suspect that with the Russian sanctions hurting Turkey, Erdogan wanted to tighten up relations more than ever with Baku and its oil and gas exports through Turkey.

There has been some silly “what if” talk about Russia cutting off gas supplies to Turkey, but I suspect that Moscow would rather sell the gas and use the profits for major things it wants to do, like continuing to modernize its military. Putin is nothing if not pragmatic, and not prone to make a bad situation worse by overextending itself.

I do hope that his ceasefire will hold for the people of Nagorno-Karabakh, or they might regret not having worked harder to reach an earlier settlement. Who would save them from Baku’s clear military superiority and neighbors who might secretly be glad to have the issue settled?

And I fear for the Armenians who already had volunteers lining up to fight the Azeris, when that may just make the pile of dead that much higher. Victor Hugo saw that in the Balkans from whence he wrote, “Liberation is not deliverance. One gets free from the galleys, but not from the sentence.”

Let us pray that wise men and cool heads will prevail, and the winds of peace will blow across this troubled land before it is stained with more blood.