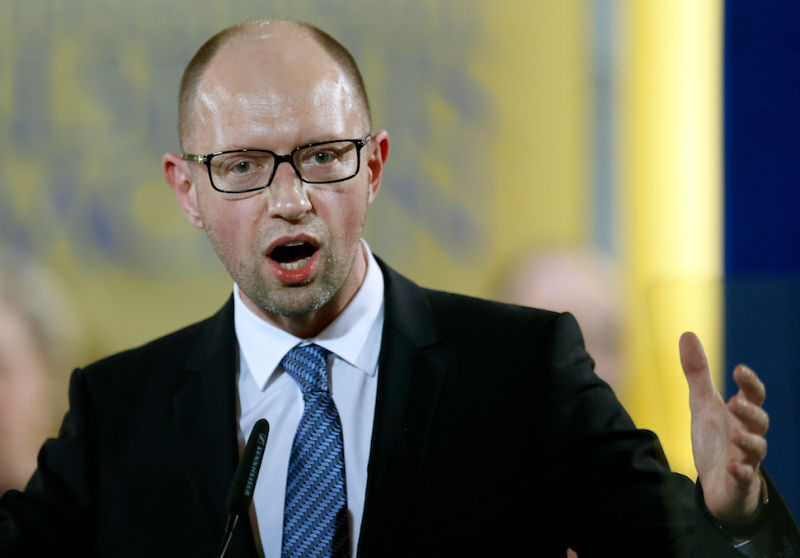 [ Editor’s Note: Yatsenyuk was the fox in the chicken coup. How often have we seen politicians run on a platform to get elected that they have no intention of fulfilling, but figuring that by the time they get pushed out, they will have set themselves up well.

Yats admits that he has bigger and better things to do. If any country needed to make graft a capital crime and declare martial law for a few months to clean up, it is Ukraine. They would not really have to kill a lot of people, as the bad guys would be out of the country in 24 hours.

As always, to see if this is a real or cosmetic musical chair game, we will watch to see who is chosen to replace him. Yatsenyuk was always the US guy, one of Nuland’s puppets to hustle people; with his banker career and the US behind him, he had the key to the door with the goodies behind it.

The problem was that the goodies were not for the people, but someone else, which is why the street demonstrators wanted him out. That included the Neo-Nazi thugs in the Svoboda Party, bless their hearts. What can I say… the wannabe genociders of the Donbass people are “concerned about corruption”? You just can’t make this stuff up… Jim W. Dean ]

Ukrainian Prime Minister Arseniy Yatsenyuk has announced his resignation after weeks of a political crisis in the Eastern European country.

The premier said in a televised address on Sunday that he would formally submit his resignation to parliament on Tuesday.

“I decided to resign from the post of Ukraine’s prime minister. On Tuesday, April 12, the decision will be submitted to the Verkhovna Rada (Ukrainian parliament),” Yatsenyuk said, adding, “Since now, I see my goals broader than the powers of the government head.”

The outgoing premier stressed that destabilization would be “inevitable” in Ukraine if a new government was not formed. He said his party, the Popular Front, would continue to remain a part of the ruling coalition in the parliament.

The resignation came two months after Yatsenyuk’s government almost narrowly dodged a no-confidence vote, which provoked various political parties to leave the ruling parliamentary coalition. On February 16, the motion got 194 votes in the Verkhovna Rada, falling short of the 226 votes required to oust the prime minister.

In recent weeks, protesters have held rallies outside the parliament in the capital, Kiev, calling for the resignation of Yatsenyuk over what they perceive to be his government’s failure to fight graft. The protest was organized by the Ukrainian nationalist Svoboda Party and the Party of Ordinary People.

Yatsenyuk’s government has come under increased pressure due to allegations of corruption and the slow pace of anti-corruption reforms.

He was a leading figure during a 2014 political campaign demanding pro-EU changes in government policies and vowed to clean up the government by cutting its ties to shadowy tycoons. However, people soon accused the former banker of defending the interests of the very same billionaires he had vowed to sideline.

The political crisis in Ukraine also threatens a massive IMF-led rescue package aimed at reviving the country’s shattered economy and slashing its reliance on Russian financial support. The International Monetary Fund (IMF) has warned that it may withhold aid to Ukraine if it does not carry out anti-corruption reforms.

In February, Ukrainian Economic Development and Trade Minister Aivaras Abromavicius resigned, claiming that substantial quantities of money were being diverted away from the Ukrainian government.