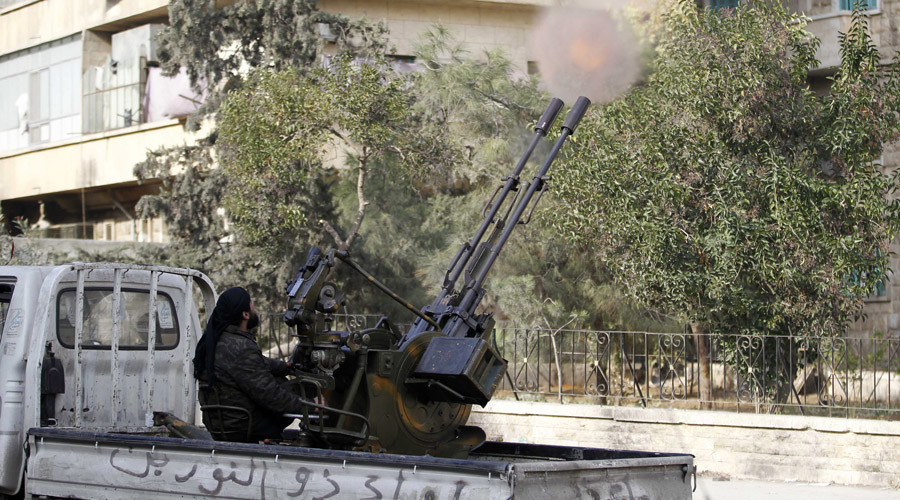 –
A member of Islamist Syrian rebel group Jabhat al-Nusra fires a weapon on the back of a lorry in Aleppo’s Bustan al-Qasr neighbourhood
Islamist group Jabhat al-Nusra has gathered nearly 10 thousand troops around the city of Aleppo, according to Russian military officials. However, they denied an earlier claim by the Syrian government that they had planned to take part in an assault on the city.

“Despite progress achieved in securing a ceasefire, Turkey continues to funnel men and arms to Jabhat al-Nusra,” said Lt. Gen. Sergey Rudskoy, head of operations at the Russian General Staff, at a scheduled press briefing in Moscow.

Alongside Islamic State, al-Nusra is not party to the shaky six-week old ceasefire being monitored by Russia and the US, and remains a legitimate target.

“Al-Nusra’s men and materiel are being allowed to pass through areas that the US has designated as being controlled by the opposition,” continued Rudskoy in a reprise of a frequent Russian claim that the West and its Middle Eastern allies are shielding extremists by labeling them as moderate opposition.

The official said that Moscow has asked Washington to assist in limiting al-Nusra’s strategic maneuvers.

According to Rudskoy more than 8,000 al-Nusra militants have concentrated on the south-western outskirts of Aleppo, and 1,500 are to the north of what was Syria’s largest city before the outbreak of violence in 2011. In the last day alone, more than 300 militants have arrived in the area, equipped with a tank, and over 20 offroaders with mounted guns.

Aleppo has been under partial rebel control since 2012, and intense clashes have erupted in the past week,

“It is reliably known that the militants are planning a large-scale offensive with the aim of cutting off communication between Aleppo and Damascus,” said Rudskoy. “If they are not stopped, we could see a blockade of northern parts of Syria.”

At the same time, the official moved to dispel strengthening rumors that the government is preparing a counter-offensive to regain control of Aleppo. These were strengthened by Syrian Prime Minister Wael al-Halaki, who said on Sunday, that “together with our Russian partners, we are preparing for an operation to liberate Aleppo.”

“There are no plans to storm Aleppo,” insisted Rudskoy.

Despite public statements from opposition forces and Western diplomats that the ceasefire is on the verge of a breakdown, the Russian general claimed that “peace is returning to Syria.”

He specifically mentioned the towns of Palmyra and Al-Qaratayn, which have been won back from Islamic State this month. Rudskoy also said that 61 settlements have signed up to the ceasefire with Syrian authorities, and 47 military brigades have indicated that they have stopped fighting to the Russian monitoring center.