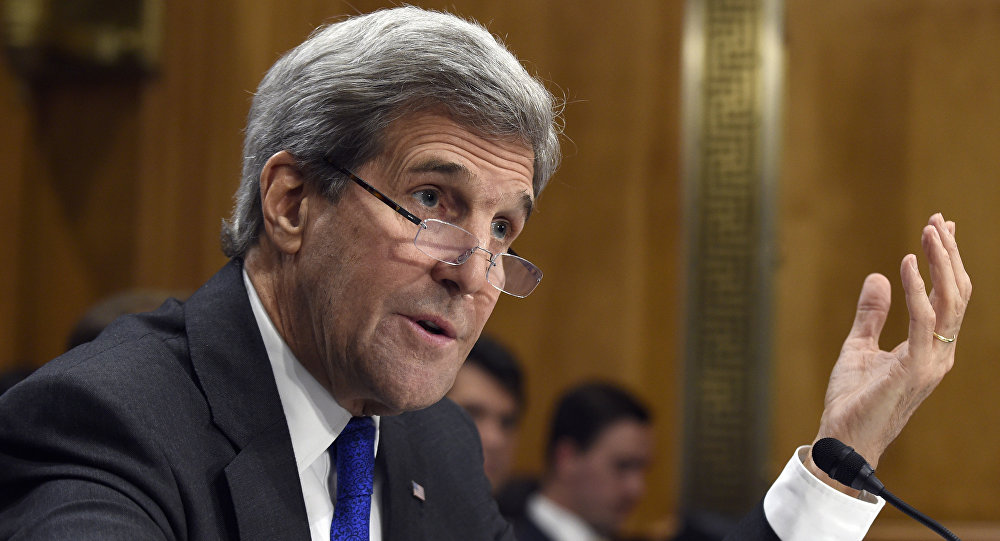 [ Editor’s Note: Here we have more shifting sands in the Mideast in terms of recognizing a failed policy that is a waste to continue pursuing. The most visible motivation could be a combination of fatigue setting in with the prospect of continuing down a dead end road for a decade or two; and the other, their wanting to focus on economic issues, which are a growing concern.

Kerry’s making this statement while in Bahrain is even more significant, as it comes on the heels of NATO Secretary Stoltenberg announcing that meeting agenda talks were in progress with Moscow. Yesterday, we had the Austrian defense minister report that he had accepted an invitation to visit the Russian Defense Ministry to discuss shared concerns.

The Dutch just put a torpedo in Ukraine’s EU association bid if the prime minister can withstand the pressure that will be put on him to ignore the vote. And Russia edges Turkey out of its bellicose position on backing Azerbaijan into retaking the disputed Armenian occupied region, when Putin took the peacemaker route to mediate the ceasefire. I know Spring is in the air, but something else must be, too… Jim W. Dean ]

Iran could play a constructive role in resolving the ongoing conflicts in Yemen and Syria, US Secretary of State John Kerry stated in a joint press conference with Bahraini Foreign Minister Sheikh Khalid bin Ahmed al-Khalifa on Thursday.

“If Iran wants to be part of a constructive resolution to Syria, constructive resolution to Yemen, it can be so,” Kerry said. “I know from our conversation here this morning with Sheikh Khalid that he would welcome, as would other Gulf state members would welcome, Iran to the table if they want to be part of a genuine security arrangement for the region.”

Tehran is an ally of Syrian President Bashar Assad, and is believed to be backing Houthis in Yemen.

On April 4, the Department of Navy said in a statement that a US ship intercepted and seized a shipment of weapons that was reportedly being transported on an Iranian vessel, and “was likely bound for Houthi insurgents in Yemen.”

“It is not constructive to be sending dhows across the Gulf loaded with weapons that are only going to add fuel to the fire of a war we are busy trying to end,” Kerry added. “And we would invite Iran to be part of helping to end the war on a constructive basis, not to fuel it into greater conflict.”

Yemen has been engulfed in a military conflict between the government of Abd Rabbuh Mansur Hadi and Shiite Houthi rebels, who have been backed by army units loyal to former President Ali Abdullah Saleh. Since March 2015, a Saudi-led coalition of Sunni nations has been carrying out airstrikes against the Houthis at Hadi’s request.