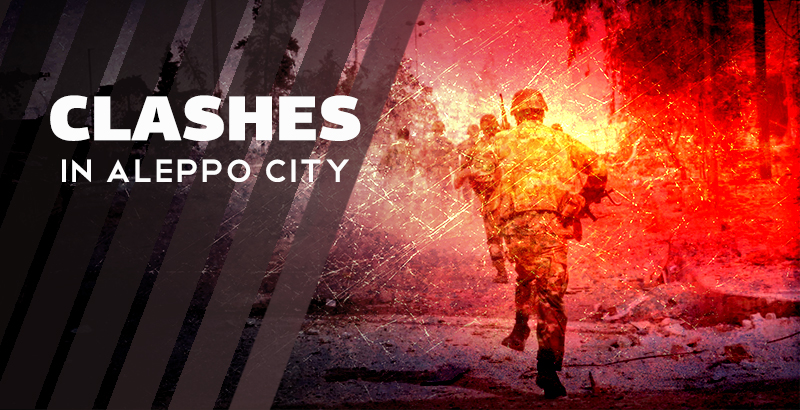 Heavy firefights erupted between ISIS and Al-Nusra linked militants in the area of the al-Yarmouk refugee camp in the Southern countryside of Damascus on April 10. According to pro-government sources, “tens of terrorists” were killed or wounded in these firefights.

Meanwhile, the loyalists’ forces stormed strongholds of al-Nusra and Faylaq al-Rahman and forced militants to retreat from the Farms of Kanakri and Doumani Poultry near the town of Bala. Despite the local gains, the pro-government forces’ actions in the region cannot be described as a success because a major part of available forces are involved in operations in other regions of Syria.

On April 9, Al Nusra, Harakat Ahrar Al-Sham, the Free Syrian Army’s “Division 16” and other allied militant groups captured the village of Al-Khalidiyah and made an attempt to seize the town of Khan Touman in the province of Aleppo. Nonetheless, this attempt was foiled by a joint force of the Syrian Arab Army (SAA), Hezbollah and the Iranian Revolutionary Guard Corps (IRGC). Then, the pro-government units conducted a counter-attack and re-captured Al-Khalidiyah. Khan Touman and Al-Khalidiyah are located near the strategic M5 highway which allow loyalists to threat this important part of the militants’ logistic infrastructure.

On April 10, SAA soldiers stormed the al-Nusra’ positions in the neighborhoods of al-Jazmari, Youth Housing, and Bani Zeid in the city of Aleppo. Clashes are ongoing there.

In the meantime, the Syrian forces targeted supplying lines of al-Nusra terrorists near Handarat refugee camp and al-Shaqfa farms in the Northern part of the province reportedly inflicting a heavy damage to the militants.

Abdullah Mohammed al-Hasm, a Kuwaiti national and commander of Ahrar al-Sham Movement in Southern Aleppo, was killed in heavy clashes with the Syrian army on Saturday night.

At least 10 people lost their lives and more than four dozen others sustained injuries in a spate of bomb explosions and a militant mortar attack that struck residential neighborhoods in and around Baghdad last weekend.

Iraq’s Popular Mobilization Units have launched an operation to recapture a northern town of Bashir and cut ISIS supply lines in the area.

Meanwhile, heavy clashes are ongoing in the town of Hit, where Iraq’s Security Forces and its allies are reportedly “successfully pushing” ISIS militants. However, numerous reports about a devastating blow to the terrorists can’t be confirmed by the facts on the ground yet. Since the start of operation in March, the Iraqi military entered the town’s centre and liberated some neighbours. The full liberation of the town is way ahead.