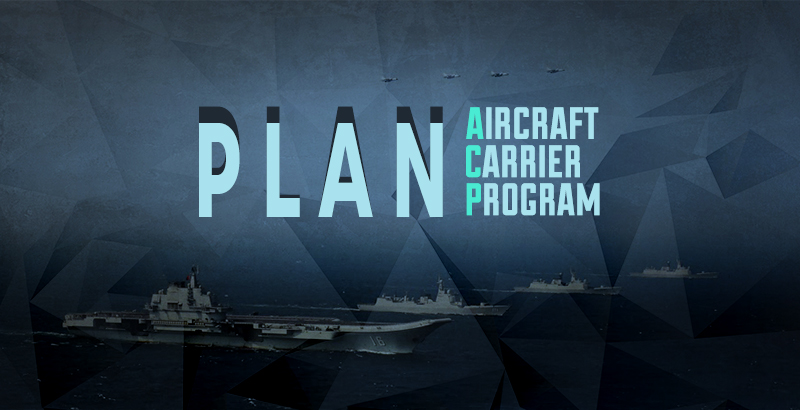 People’s Liberation Army Navy officials acknowledged the existence of the first indigenously built aircraft carrier for the PLAN on December 31st, 2015. The carrier is based on the same Soviet era template as the Liaoning currently in service, and is being built in the same Dalian shipyard as its predecessor. The Liaoning was a development of the Admiral Kuznetsov Class carrier Varyag purchased from the Ukraine in 1998 and totally refitted in the Dalian Shipyards. The Liaoning was commissioned on September 25th, 2012 after extensive sea trials and has been in service with the PLAN in the role of a training platform by which the Chinese Navy aims to learn and perfect the complex process of aircraft carrier operations.

Known as Carrier 16, the Liaoning is a conventional aircraft carrier that utilizes a skip ramp to launch aircraft. This design limits the size and weight of the aircraft that can be employed, a major limitation overcome by the steam catapults of larger aircraft carriers and the new electro-magnetic catapults in use on the new USS Gerald Ford Class now entering sea trials. The relatively small size of the Liaoning further limits the number of aircraft that can be carried, serviced and stowed onboard. A total of 24 J-15 fighters, 6 Z-18 anti-submarine warfare helicopters, 4 Ka-31 early warning helicopters, and 2 Harbin Z-9 rescue helicopters are carried.

The J-15 fighter is the naval version of the J-11B which is based on the Russian Su-33, and can only be launched via the skip ramp with a reduced weapons payload of approximately 2,000 lbs. with a maximum fuel load. Thus, the J-15 can only be utilized from the Liaoning with either a reduced range or reduced weapons payload. The aircraft is limited in both interceptor and strike roles due to the inherent limitations of the skip jump design. Chinese naval planners are already hard at work to rectify the shortcomings of the Liaoning in the follow-on vessels, Carrier 17 which is being constructed, and Carrier 18 which is already in the planning stages. Carrier 17 is being designed with greater underdeck hangar space, possibly denoting a higher compliment of aircraft, and it is surmised that Carrier 18 will be equipped with steam catapults to overcome the limitations inherent in the skip jump design.

Military analysts speculate that the PLAN will build and operate at least three aircraft carriers. This will allow for one vessel to be in operational service, one engaged in training operations and one undergoing maintenance at any given time. China has wisely utilized the Liaoning as a training platform by which to learn and perfect its aircraft carrier operations and to learn what is most desirable in any future aircraft carrier design, as it is becoming obvious that the first three vessels are just the beginning of a more ambitious program.

The largest unknown concerning the PLAN’s current aircraft carrier program is how they intend to use these costly and complex vessels operationally. The vessels lack a large and powerful strike aircraft component and have a limited range due to their conventional propulsion. Consequently, the carriers would have to remain within the range of land-based ASW and early warning and surveillance aircraft such as the Tu-154 and Y-8 AWACS, because they lack their own fixed-wing ASW and EWACS assets, and would require underway replenishment from a fleet based supply vessel and fuel replenishment ship. It would appear that the new Type 901 fleet supply vessel currently under construction in southern Guangdong province is meant to service the fledgling carrier battle group. Details are sketchy, but the two vessels planned are estimated to be between 40,000 and 45,000 tons displacement, twice the displacement of the Type 903A fleet tankers currently undergoing sea trials.

Possible future strategic uses of a PLAN Carrier Battle Group include deployment in the South China Sea to effectively increase Chinese Area Control/Access Denial capabilities. Potential regional adversaries such as Taiwan, Vietnam and the Philippines would have to alter their strategic calculus to account for the added threat of a Chinese Carrier Battle Group in the region when considering any future warfare scenarios. The armed forces of Taiwan have taken notice of the threat and conducted war games recently that involved the addition of a PLAN CBG in a hypothetical invasion of the island nation. It is most likely that the first three aircraft carriers are just a developmental stepping stone to a much more flexible, capable and powerful class of aircraft carrier. If it is one thing that the PLAN has shown in recent decades, it is committed and capable of developing and fielding modern, complex warships and weapons systems in its quest to stand on a level playing field with any potential adversary, chief amongst them the United States.