If you accept the ideological categories which the Holocaust establishment has forced upon much of the West, then you must deduce that Ben Bernanke is ipso facto an anti-Semite.

Bernanke, the man who is known for playing dice with the economy at everyone’s expense,[1] said last month that Adolf Hitler was “the person who sort of most understood fiscal policy,” presumably because he helped the German economy during the 1930s.[2]

“A third, extremely important, component of the perceived Fuhrer image was, therefore, that of the architect and creator of Germany’s ‘economic miracle’ of the 1930s. Part of the apology of the post-war era was, of course, that despite his ‘mistakes’, Hitler had revamped the economy, rid Germany of unemployment, and built the motorways.

“This is itself testimony to the penetrating and enduring features of this aspect of the contemporary Hitler image. Certainly, by 1939 it was difficult to deny that economic conditions in Germany, for whatever reasons, had improved dramatically since the Depression era.”[3]

Of course, Kershaw, in order to please the Holocaust establishment and keep his job and perhaps even his life, had to contradict himself. He added: “The working class remained the social grouping least impressed by the ‘economic miracle’ and relatively immune to the image of Hitler as the creator of Germany’s striking new prosperity.”

Well, which is it, Kershaw? If “economic conditions in Germany had improved dramatically since the Depression era,” how does that line up with the view that “The working class remained the social grouping least impressed by the ‘economic miracle….’?” And wouldn’t that bold statement itself defeat Daniel Jonah Goldhagen’s intellectually perverse and historically incoherent thesis that ordinary Germans were guilty of supporting Hitler?[4]

You see, historians like Kershaw have locked themselves into a corner and as a result are unable to dissect the good, the bad, and the ugly of National Socialism without falling into their own trap. The Holocaust establishment and thought police tell us that no one can praise or even remotely suggest that National Socialism did some good without being an anti-Semite or a Hitler apologist, but members of the establishment cannot help but drop a few good words about National Socialism every now and then.

What we are seeing here is that members of the establishment are trying to have it both ways. If the former prime minister of Israel Menachem Begin is right in saying that “Every German is a Nazi” and that “Every German is a murderer,”[5] then it makes no sense whatever for Bernanke and Kershaw to even suggest that Hitler, presumably the arch-enemy of European Jews, largely saved the German economy.

Bernanke and Kershaw show again and again that the Holocaust establishment cannot exist without contradiction and self-defeating premises. As E. Michael Jones puts it,

“So we have a federally funded Holocaust museum in Washington, but at the same time, it is illegal in many countries of the world to question any of the self-contradictory assertions about the Holocaust…

“Questioning the number of people who died in concentration camps, whether they died in gas chambers or by other means, or whether there was a plan to exterminate Jews, can land you in jail in 13 countries in the world, even though the numbers have already changed a number of times and the term holocaust came from a by now abandoned assertion that the Jews were exterminated in pits of flaming kerosene.”[6]

Jean-Marie Le Pen has recently been fined “£25,000 for Holocaust denial after describing the gas chambers as a ‘detail of history.’”[7] Yet Jewish historian Bernard Lewis and even the state of Israel have denied the Armenian genocide or Holocaust without any consequence whatsoever. 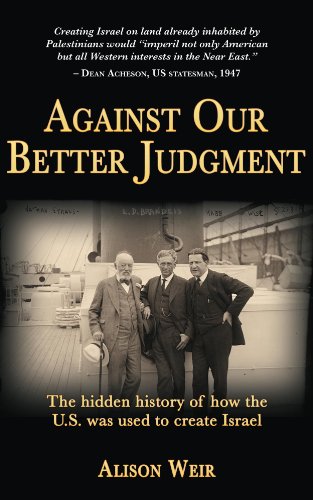 We are obviously living in an intolerable and irrational world in which practical reason has progressively become a relic of the past. Historians like Kershaw know better, but they have to crank out historically implausible scenarios in order to maintain a wicked ideology. This is one reason why military historian R. H. S. Stolfi of the U.S. Naval Postgraduate School has “weighted the great biographies [of Hitler] on the scales of historical reality and found them wanting…”[8]

According to Stolfi, the great biographies do not ask deep questions about Nazi Germany and fail to address the serious issues surrounding the evolution of Hitler and the real causes of World War II. He writes,

“In the present situation, the reading public has been served only half a portrait of the great tyrant of the twentieth century….half a portrait of Hitler tells us little about the man as a human being and presents a distorted and incredible interpretation of his actions as the creator of National Socialism and leader of Germany.

“The great biographies take excessive liberties in denigrating his person, and, in doing so, they make it difficult to comprehend him…Every single one falls short of producing an adequate understanding of Hitler as a historical person. To this point in time, the biographers have lost the biographical war.”[9]

“The great biographies” get thicker virtually every month or so, and the list is now almost endless. Just pick up David Cesarani’s Final Solution: The Fate of the Jews 1933-1949, and you will quickly realize that it has almost a thousand pages.

Robert S. Wistrich’s Hitler and the Holocaust has chapters such as “From Weimar to Hitler,” but this book again is weighed and found wanting because it does not ask fundamental questions about the so-called Holocaust and how Nazi Germany would have been almost impossible without Jewish subversive movements.[10]

In short, “Holocaust” has become big business. As Jewish Holocaust historian Tim Cole of the University of Bristol puts it,

“‘Shoah [Hebrew for Holocaust] business is big business…[In] the twentieth century, the ‘Holocaust’ is being bought and sold. $168 million was donated to pay for the building of the United States Holocaust Memorial Museum on a plot of Federal Land in Washington, DC.

“Millions of dollars have financed memorial projects throughout the United States, ranging from the installation of Holocaust memorials to the establishment of University chairs in Holocaust studies. Steven Spielberg’s movie Schindler’s List netted over $221 million in foreign box offices and even Academy Awards.”[11]

In the past sixteen years or so, we have seen how multiple Jewish groups have capitalized on this “Shoah business,” which Norman Finkelstein has called “The Holocaust Industry.”[12]

SOURCETHE POPE’S SECRET BACK CHANNEL TO HITLER
ATTENTION READERS
Due to the nature of independent content, VT cannot guarantee content validity.
We ask you to Read Our Content Policy so a clear comprehension of VT's independent non-censored media is understood and given its proper place in the world of news, opinion and media.