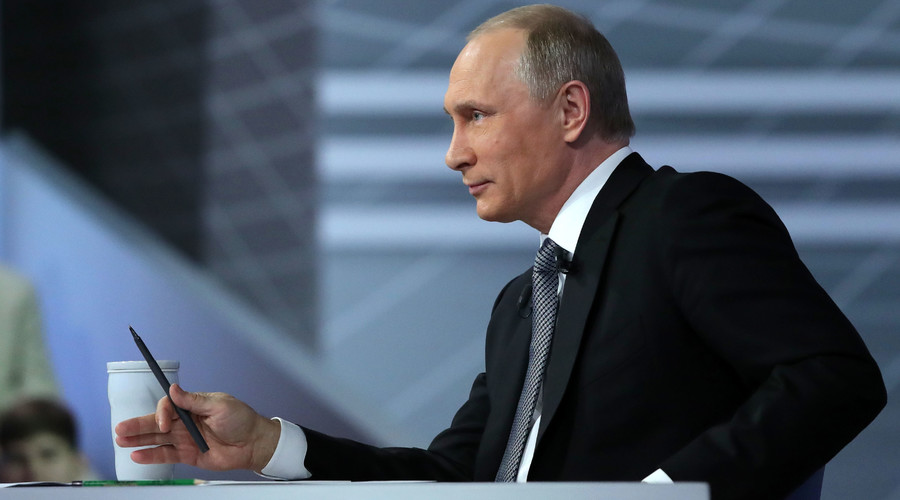 [ Editor’s Note: Putin did his marathon citizens call in again today. There is no other world leader who has done this, and none who seem interested. Yet we still continue to get the dictator silliness from some of the NATO and think tank hacks.

It will take some time to mine all of the gems out of today’s session but RT had these highlights that I wanted to get up quickly. This is his 14th session, with the earlier ones getting the selective blackout from our Western “free press”. If it weren’t for its decline and the rise of alternative media we still might not know about them… Jim W. Dean ]

From Turkish reluctance to fight jihadist militants to ‘saving’ Poroshenko or Erdogan, President Vladimir Putin’s annual Q&A session was anything but a dull affair. Over three million people wanted to ask the Russian leader questions.

The Russian president categorically denied that Russia is “encircled by enemies,” saying it would be impossible for such a thing to happen. Putin pointed out that Russia maintains good relations with the vast majority of countries around the globe.

Turkey is doing more to collaborate with jihadist extremists than it is doing to combat them, according to Putin. He mentioned that he did not think that Turkey was safe for Russian holidaymakers, though said he had no problem with the Turkish people. “We have problems with a few politicians whose behavior we consider inadequate.”

Putin called the Kurds “courageous” and “selfless” people who have shown great strength in trying to combat jihadist militants.  “The Kurds fight incredibly selflessly and don’t think about themselves,” he said, adding that they are an important force in the fight against terrorism in the Middle East and in particular in Syria.

Putin called US President Barack Obama a “decent man” for admitting that what followed military intervention in Libya was the “greatest mistake” of his presidency.

The Russian leader said he was speaking sincerely without any irony because to make such admissions is not easy, while adding that “only a strong-minded person” such as Obama could take such steps.

The Russian leader said the crisis in Ukraine was “manmade,” while it was obvious it was “an instrument to change power” in the country. The president added that little had changed with “oligarchs still remaining in power.” Citing rising costs faced by the general public, Putin mentioned that “they did not think about the people.”

Despite Russia by and large upholding their end of the Minsk agreement, Putin does not believe the West will look to end sanctions placed against Russia. “I don’t think our partners will lift their sanctions or restrictions they placed on Russia any time soon,” he said.

In news that is likely to be met with delight from Russian farmers and dairy producers, Putin said “this will mean that we will maintain our sanctions against their products.”

Twelve-year-old Varya Kuznetsova posed President Putin a rather challenging question, asking: “Who would you rescue first if they were drowning, Erdogan or Poroshenko?”

Putin opted not to pick a ‘favorite,’ but in a barb to both the Turkish and the Ukrainian leaders said, “If someone is determined to drown, you can’t save them, but we are willing to extend a hand to anyone, as long as they want that.”

Answering the question on the state of the Russian economy – whether it is in a “run of good or bad luck” (‘white or black streak’ in Russian), Putin said the economy is in a transitional phase, stressing it is slowly improving.

He added that he considers it necessary to return the economy to a path of sustainable growth through balanced macroeconomic and budgetary policies, and ensure the country’s budget deficit does not exceed three percent GDP.