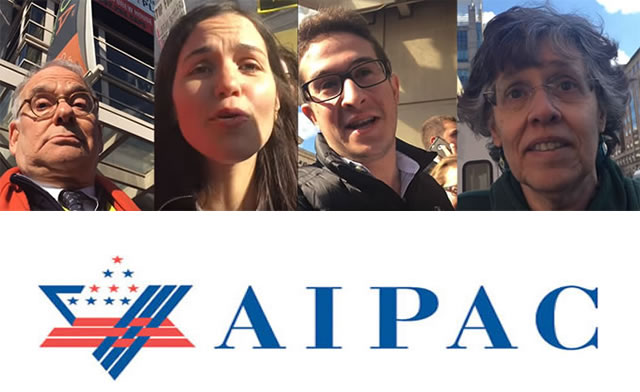 The US has a well deserved reputation as one of the most hypocritical nations on earth. We claim to be champions of democracy while overthrowing democratically elected governments. We insist we are fighting a war on terrorism while funding and training terrorists.

In Washington, it almost seems as if hypocrisy, rather than viewed in a dishonorable light, is looked upon as an admirable character trait, and the more of a hypocrite you are, the better your chances for success. An unspoken credo, to be sure, but one that does appear very much in place.

So where, one may ask, does this well of unabashed hypocrisy come from? How did it originate? And why in America?

“Trump’s racism is just awful–oh, but Netanyahu’s is okay!”

That essentially seems to be the view of a number of people who were interviewed outside the AIPAC conference last month in Washington. The interviews were conducted by journalist Rania Khalek, who quoted to those she spoke with statements made by Israeli officials, including Prime Minister Benjamin Netanyahu, but told them that the statements had come from Donald Trump–and she then asked them for their reply.

In each case they were quick to condemn the comments when they thought they were Trump’s, but when told the comments had actually been made by an Israeli official, what do you suppose happened? The interviewees began to dither, vacillate, or offer outright justifications. One man, apparently overcome with bathos, proclaimed Israel to have the most “moral army” in the world while touchingly expressing his faith in the notion that Jews “are a light unto the nations.” *

“It was the perfect opportunity to engage with Israel’s most politically active supporters, so I pulled out my camera phone and began asking what they thought of Trump,” says Khalek in an article at the Electronic Intifada. She added:

One young woman said of Trump, “He’s terrible. He incites racist attitudes.” When asked, “What do you think about Trump’s comments comparing migrants to cancer?” she responded with disgust, “He’s awful. I hate Trump.”

But it was Israeli culture minister Miri Regev, not Trump, who compared African refugees to “a cancer,” a statement that 52 percent of Israeli Jews agreed with in one survey.

Regev later apologized, not to Africans but to cancer survivors for likening them to Black people.

So pause a moment and consider. Here we have…

Thats H-Y-P-O-C-R-I-S-Y for you. Spelled in CAPITAL LETTERS!

Perhaps Khalek, as a followup question, should have asked her interview subjects if they believe racism is okay when it’s Jews being racists, and that only Gentiles should be called out for demeaning other groups of people. Sadly she didn’t, though possibly she was afraid of being mobbed and lynched should her questions grow too provocative. “Look, I don’t like the direction of this conversation,” snapped the man who thinks Jews are a light unto the world.

As for Donald Trump’s call for the US to build a wall along the Mexican border–whether such a call constitutes “racism” per se is debatable. All nations, so far as I’m aware, have a right to build a wall along their borders should they so choose. Our own wall, should such come to pass, would for sure fall into the “racism” category if, say, if it were to jut southward a hundred kilometers or so into Mexican territory in a number of places, but this isn’t what Trump has proposed.

Trump certainly is not without his faults. He has pandered to a shameful degree and accused Palestinians of teaching their children to hate, but that is another matter. Maybe if Khalek goes back to the AIPAC conference next year she might ask attendees about the racist Israeli wall and why it obtrudes so deeply into Palestinian territory, and if she does maybe she’ll get the answer that it was simply a slight miscalculation on the part of Israeli land surveyors. If one is going to be a hypocrite, one should at least strive for originality, and that’s one excuse I haven’t heard before.

But getting back to my original questions: where does America’s well of hypocrisy come from? How did it originate? And why did it arise in America?

Perhaps one answer is that there is an historical component to it.

“Woe to you, scribes and Pharisees, hypocrites! For you clean the outside of the cup and of the plate, but inside they are full of greed and self-indulgence.”
–Jesus

Jesus had a lot to say about the Pharisees–both to their faces as well as in private conversations with his followers. The passage above comes from the 23rd chapter of Matthew, but in John 9 he upbraided them by asserting, “If you were blind, you would not be guilty of sin, but now that you claim you can see, your guilt remains”–and in Mark 7 his words were, “Isaiah was right when he prophesied about you hypocrites, ‘These people honor me with their lips, but their hearts are far from me.’”

Pretending to be god-fearing–I guess it’s kind of like claiming you have the most moral army in the world or you’re the only democracy in the Middle East. At any rate, Jesus seems to have been quite familiar with the Pharisees and their hypocritical habits and craven appetites.

Last month, just as the AIPAC conference was getting under way, I wrote the following:

Today is Palm Sunday. The Pharisees are meeting in Washington.

The Pharisees are still around today, only they don’t call themselves Pharisees any more. One of the names they go by is AIPAC, or that’s how I view AIPAC anyway. And in its annual “policy conference,” opening Sunday and running till Tuesday, the lobbying organization will be exploring ways of leveraging greater support for the Pharisaic, apartheid state of Israel–as if the billions a year America already gives isn’t enough and we should all be obliged to give more.

AIPAC is essentially the modern-day equivalent of the Pharisee sect. And they exert an enormous amount of power in Washington. One who was under no illusion about this was Ariel Sharon:

“Every time we do something you tell me Americans will do this and will do that. I want to tell you something very clear, don’t worry about American pressure on Israel. We, the Jewish people, control America, and the Americans know it.”

Noam Chomsky was kind of stating more or less the same thing when he said:

“When I refer to Israel in these remarks, I generally have in mind the United States and Israel. It’s important particularly for Americans to recognize that virtually everything that Israel does is with the decisive support, often direct participation, of the United States.”

Chomsky might also–Jesus-style–have accused the US and Israel of pretending to be god-fearing and cleaning the outside of their cups while being full of greed and self-indulgence on the inside.  It would have been just as valid an observation.

Meanwhile, the alleged racism of Donald Trump pales in comparison to that expressed by current and former Israeli officials, and the two examples cited by Khalek in her interviews at the Pharisee convention are but the tip of the iceberg.

“Little snakes” (Ayelt Shaked), “drugged cockroaches in a bottle” (Raphael Eitan), “grasshoppers” (Yitzhak Shamir), and “crocodiles” (Ehud Barak) are all designations used by Israeli officials in the past to describe Palestinians.

Israel “will be based on freedom, justice and peace as envisaged by the prophets of Israel;”–so stated the Zionist-dream-come-true’s founders in their 1948 Declaration of the Establishment of the State of Israel. They go on and clarify:

it will ensure complete equality of social and political rights to all its inhabitants irrespective of religion, race or sex; it will guarantee freedom of religion, conscience, language, education and culture; it will safeguard the Holy Places of all religions; and it will be faithful to the principles of the Charter of the United Nations.

Nice sentiments, but of course whatever the Pharisees lovingly fondle with one hand they likely will spray with skunkwater with the other.

* I do not know how long the above video will be around. In the past 24 hours it has disappeared from the Electronic Intifada website, though for the time being it is still visible on YouTube and at Khalek’s own personal website.