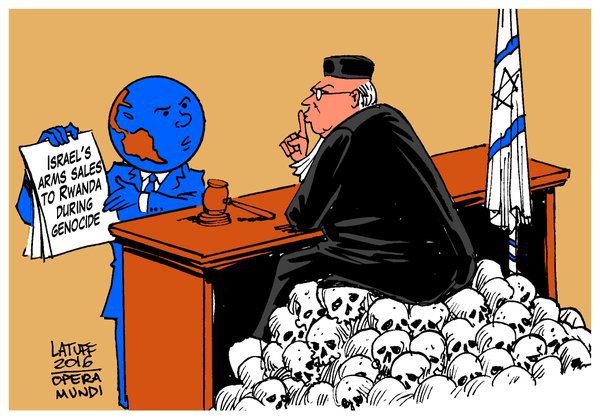 In 2006, Israel’s largest news site Ynet published a courageous article by nationalist Israeli writer Sever Plocker who admitted that  “some of greatest murderers of modern times were Jewish.”

Like Yuri Slezkine, Plocker admits that the Stalin death machine was operated by Jews such as Genrikh Yagoda and Lazar Kaganovich. In 1934, at the peak of Stalin’s purge: “38.5 percent of those holding the most senior posts in the Soviet security apparatuses were of Jewish origin.”

In recent years we have learned that a quarter of the International Brigade that fought Franco in Spain was Jewish, and the Lingua Franca of the Brigade was Yiddish. I have lost a few Jewish ‘anti’ Zionist friends trying to discuss that topic and to grasp the role of the Yiddish speaking combatants in the destruction of Catholic Spain in that bloody war.

It would be encouraging to imagine a genocide that is totally free of any Jewish involvement. Sadly, the Rwanda genocide doesn’t fit into this mythical category.

Haaretz reported last week that the Israeli Supreme Court decided to uphold the denial of a Freedom of Information request to make public documents about Israeli ‘defense’ exports to Rwanda at the time of the 1994 genocide in that country.

In 2014, attorney Eitay Mack and Prof. Yair Auron submitted a request to the Defense Ministry under the Freedom of Information Law, asking for details of Israeli arms exports to Rwanda between 1990 and 1995. In 1994, hundreds of thousands of Tutsi minority Rwandans were slaughtered by the Hutu majority during Rwanda’s civil war.

Israel’s Defense Ministry refused the request, saying this information “was not to be divulged.”

Mack and Auron appealed to the Supreme Court who unanimously rejected their appeal. The Court held that; “We found that under the circumstances the disclosure of the information sought does not advance the public interest claimed by the appellants to the extent that it takes preference and precedence over the claims of harm to state security and international relations.”

The message is unmistakable. The Jewish State, that made the Holocaust into its state religion, is actively concealing its involvement in the genocide of another people. This is the true meaning of the Holocaust Religion — it is concerned with the primacy of the suffering of one people alone and these people aren’t Tutsi.