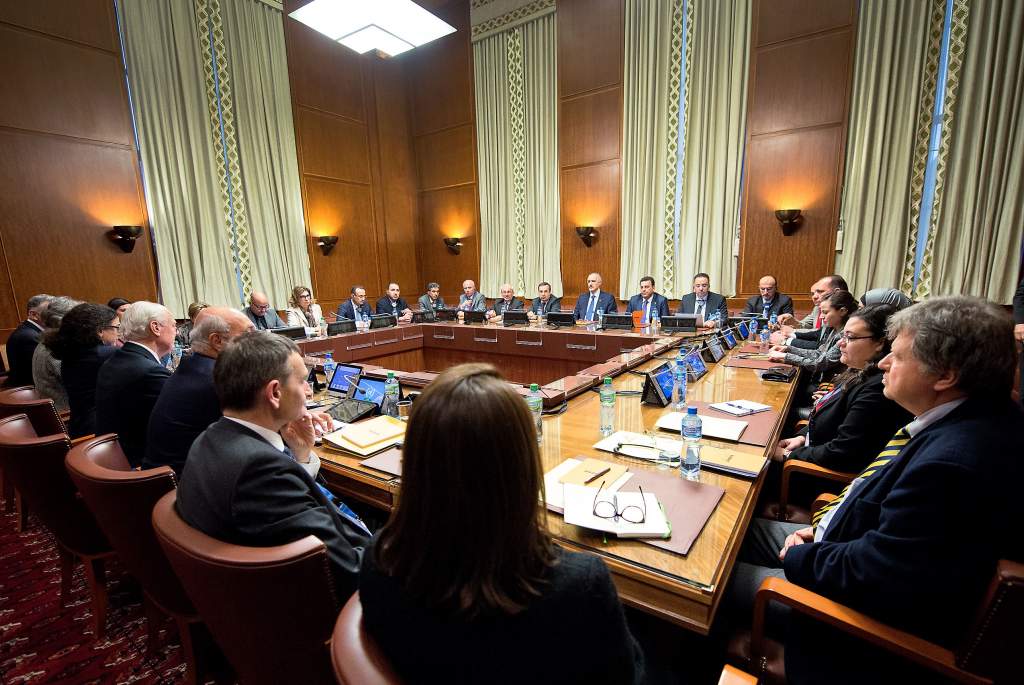 [ Editor’s Note: It is so much fun being right. In all of my writing and interviews, I have stated that the Western coalition’s only motivation in the peace talks was to try win through them what it has not been able to gain on the battlefield — the Balkanization of Syria.

The Saudi opposition led the charge on this strategy, first pretending to represent “the opposition”, when it only represented those elements funded by Saudi Arabia.

They picked a catchy name — the High Negotiations Committee (HNC) — and miraculously Western press gives them 90% of the news coverage, while the real moderate opposition receives 10%. Ah… a free press is such a wonderful thing.

The Saudi opposition folks have almost no political support inside Syria, primarily due to having bathed the country in blood. No matter what nasty things the Assad regime might have done in the past, it paled in insignificance to the Western coalition’s actions that inflicted major state-sponsored terrorism on Syria, with no regrets.

The HNC’s threat to leave the talks would actually be good news, as the peace parade could march forward without them. That would force the press to cover the real opposition groups that continued to participate, and they would have a vested interest in fighting the others, who must be exterminated to restore the country economically, and have a presidential election, the regular peacetime kind.

The big trick to that is going to require cutting off the jihadis’ resupply from US allied countries, like Turkey and the Saudis, where there are competing interests.

Even Iran, who has long term economic interest with Turkey, like wanting to export oil and gas someday via its pipelines, has made no demands that Erdogan stop supporting the Syrian terrorists, even though they are fighting and killing Iranian military there.

We can see now that the real reason these terrorist groups joined the peace talks was to have a respite from the Russian bombing to regroup and rearm. Assad countered that by having the Parliamentary election to show that most of the opposition cannot get elected as dog catchers.

The good news is that territory being retaken by Damascus is going to stay that way. The Russians are continuing to train the Syrian army in all the modern tactics and equipment, actually using the conflict as a proving ground for everything it has, to perfect its use and bring the Russian armed forces up to speed on it, also.

For example, just think how many experienced mine clearers the Russians and the Syrians have now. Think about how good their artillery people are, and their electronic warfare people are. Eurasian countries are going to be standing in line to buy all of this stuff, as they have seen it work, and Russia can always undercut the vastly overpriced Western equipment… Jim W. Dean ]

Factions fighting under the banner of Turkey-based Free Syrian Army and Ahrar al-Sham said in a statement Monday that they would respond “with force” against the government which is currently fighting Daesh and Nusra Front in Aleppo.

Militants later launched a fierce attack against government forces in Latakia province and the strategic Ghab plain in Hama province, the Observatory for Human Rights said. The British-based group claimed that the militants had almost completely taken over the town of Khirbat al-Naqus in Hama.

The declaration of war came after the Saudi-backed opposition threatened to abandon the UN-brokered talks if there is no progress on its demand for a political transition away from President Bashar al-Assad.

Representatives of the High Negotiations Committee (HNC) said that the Geneva peace talks could collapse if Damascus refused to negotiate Assad’s fate.

“We might suspend (our participation in) the talks if things carry on this way, and then there will be no prospect for any political solution,” HNC member Abdulhakim Bashar said.

The opposition insists on Assad’s resignation. The government says the fate of Assad is “a red line” and only the Syrian people can decide about it.

A letter signed by “armed revolutionary factions” urged the HNC to “take firm and decisive stances towards the half-solutions being propagated by the regime’s allies, and de Mistura.”

De Mistura floated the idea of President Assad remaining in power in exchange for the opposition’s nomination of three Syrian vice-presidents. The opposition dismissed the suggestion outright.

Syria has rejected the idea of a transitional governing body, saying instead Assad could broaden the government to include opposition and independent figures. Government representatives and a coalition of opposition groups are engaged in talks in Geneva aimed at finding a political solution to the Syrian conflict.

The last round of talks came to a halt on March 24 over disagreements on the role of President Assad in Syria’s future. Mohammed Alloush, the chief negotiator of the HNC, said Sunday that there could be “no compromise” on Assad’s ouster, calling for the resumption of attacks on government forces.

“Don’t trust the regime and don’t wait for their pity,” Alloush wrote on Twitter on Sunday. “Strike them at their necks. Strike them everywhere.”

Other figures of the opposition, however, said that Alloush’s comments did not represent the HNC’s stance.

“Alloush’s position is personal. We as the HNC cannot adopt this position,” Yahya al-Aridi, a member of the HNC who is in Geneva, said.

Alloush is among senior figures of the Jaish al-Islam militant group and has reportedly spent most of his life in Saudi Arabia.

A truce, brokered by the US and Russia, went into effect across Syria on February 27. However, it does not apply to terrorist groups such as Daesh and al-Qaeda’s Syria branch al-Nusra Front.

The foreign-sponsored conflict has left over 470,000 people dead since it began in March 2011, according to a February report by the Syrian Center for Policy Research.

The tally represents a dramatic increase from the 270,000 fatalities reported by the so-called Syrian Observatory for Human Rights, which stopped independently counting Syria’s death toll early in 2014. Syrian forces have managed to liberate many militant-held areas over the past few months.