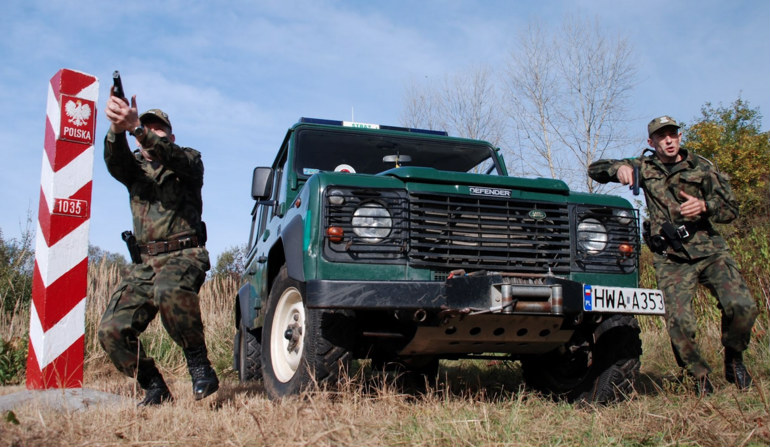 [ Editor’s note: This is an interesting “half an article” by Stachnio because it quotes so much outside material. One of the reasons we like to cross post NEO articles is they cover content that is getting little coverage in Western media and less in the US.

VT has editorialized endlessly about the boomeranging terrorist scourge that is being unleashed upon the planet due to Western and Gulf State sponsors of terrorism, who thought it would be a low-cost regime-change tool that carried no fingerprints back to them. They still suffer from this illusion.

But they themselves are getting a “two fer” on this. They get to crank up a huge domestic surveillance apparatus, whose main goal is to collect information on any growing threat to their being exposed as the criminal hoodlums that we are learning that “they” are — those in and out of government doing this to us.

The New World Order terrorists then proceed to frame Russia as a threat to us, when Russia is one of their targeted victims and a natural ally for us against the NWO mother of all threats.

Stachnio lays out a Polish microcosm of this, with Poland being a terrorist weapons transit country for the growing marriage of ISIL and the Ukrainian neo Nazis and their boardroom buddies; while the new Polish government, sympathetic to the Ukraine coup government, tries to frame the Muslim immigrants, who aren’t really in Poland yet, as THE big threat.

This is classic Israeli chaos theory on steroids — death by a thousand cuts, where the victims never see, much less reach, who is sponsoring it all. I will say it again, this is going to get much worse before it gets better… Jim W. Dean ]

After bringing Ukraine to the stage of complete disintegration, the country has fallen into mired corruption, ruled by oligarchs and extremist groups. This all brings Ukraine towards the final steps of ‘democracy’ and closer EU and NATO structures.

Namely, it changes Ukraine into an open mafia territory where one of the primary forms of trade is selling weapons. About 2 million weapons have recently been acquired by the Ukrainian Maidan extremists to ISIS cells in Western Europe.

Poland at this stage will be the territory of smuggling routes and logistics. Paradoxically, precisely because of being a smuggling route, Poland will be able to enjoy, for as long as possible, relative calm since groups of terrorists smuggling weapons from Ukraine will not want to be noticed by local intelligence services in Poland.

Andrzej Zapałowski, Ph.D and expert in Polish national security, said to me in an interview,

‘It is estimated that there are over two million weapons outside of the control of the State in Ukraine. At such a time of large scale immigration across the Polish-Ukrainian border, there will be a large amount of smuggled weapons being sent to Islamists in Germany, France, Belgium, Netherlands, etc.

That is why Poland is essential for them, and for this reason, they want to delay, for as long as possible, doing certain activities in Poland, in order not to sensitize the Polish services to certain issues.

The degree of saturation of Islamists in Poland is negligible, so in relation to this, carrying out sustainable activities on Polish territory is excluded. It may be an incidental action if such an accident were to occur. The services of the Ukrainian government are becoming worse, as does the situation on their side when it comes to border protection.

This only shows that the smuggling continues and its scale is unknown. I am afraid that the collapse of the Ukrainian state, with which we have to deal with, now causes that the Ukrainians will create massive criminal organizations, which will then attract illegal immigrants. They have to make a living off something, and this is a very good business’.

I have some examples that show that Ukraine is fulfilling the role of a mafia state and how it could be multiplied and multiplied. The first example might even be the purchases of IS weapons in Ukraine or recent reports of an ‘Amber War’ in Ukraine. In the Rivne Oblast region, every fourth citizen is engaged in the illegal extraction of amber. The mafia is selling illegal ‘permits’ to residents in order for them to be able to mine.

Therefore it seems, that the concerns of Andrzej Zapałowski, Ph.D are connected with the creation of another lucrative businesses in Ukraine (I mean the arms trade to Western Europe and smuggling in the so-called refugees) are quite accurate.

The Polish Government plays quite an interesting role in all of this. On one hand, they are supporting the Ukrainian armed forces, whatever that means now.

On the other hand, through the right-wing press, the government is showering the Polish public with information that we are at risk of invasion by Islam and declaring that Poland will not buckle under the pressure.

Dr. Mateusz Piskorski, founder of the European Center of Geopolitical Analysis, said to me in an interview,

‘The government of PIS is riding on the wave of „Islamophobia“ and the fear of refugees from the Middle East, both of which is making excellent and free PR and valiantly struggling with a problem that is only theoretical. It does not solve the problem, which is real, but it solves the theoretical and potential problem in a very simple way, ie. by issuing a statement that we do not intend to accept immigrants and would not bow to Angela Merkel.

It is of course true, but it is a PR game. Talking about refugees from the Middle East in Poland is a matter firmly detached from reality, because we are talking about several thousands of potential immigrants.

Meanwhile, according to official data, we have at least 1.5 million immigrants from Ukraine. Perhaps if we had made a leap in the field of social policy and repeatedly put standard of living to the level of German, we would the same problem with immigrants from the Middle East’.

Europe, in the matter of a few months, has become a Europe of free borders, peace and relative security, to a Europe of entanglements where most of the population is afraid for their life. I described this scenario some time ago citing the ‘prophetic’ words of Jacques Attali.

Ironically, Islamists, who allegedly want to conquer Europe, now rely on German military tactics from 1908, exactly based on the German Auftragstaktik. Which may suggest that the legacy of the German Nazis in the Middle East has not disappeared yet.

However, I fear that NATO’s and the EU’s war with the European Jihads will be conducted as effectively as the war with ISIS in the Middle East. The latter being responsible for ISIS and its growth in size, influence, political power and international terrorism. Will it become the same in Europe? I dare say that it’s possible as long as we have NATO and the EU handling it.

Ukraine, in this context, is in fact an excellent incubator to support ‘democratic processes’ in Europe à la Leo Strauss ‘Chaos Theory’ and tightening weapon trade cooperation between ISIS cells in Western Europe and the organized crime in Ukraine.

From this point of view, the policies of the Polish authorities seem to be very strange to me. I mean, they claim to ‘protect’ us against Islam from the West, while completely overlooking the fact that threats flow from the recently fallen Ukraine. This could, however, just be a reference to the earlier traditions of the Polish Government.

Lucyna Kulińska, Ph.D and expert on Polish-Ukrainian relations said to me in an interview,

‘This reminds me of what happened before the war, when Poland gave military training to Ukrainian nationalists. These young people entering the OUN structures then murdered Poles. They were trained and prepared for this with Polish money. Now, Ukrainians are full of praise for their OUN youth and how it is beautifully trained. Poles have very much applied themselves to it’.

At this point, we come to a rather interesting conclusion made by Thierry Meyssan.

‘If my analysis is correct, over the next decade we will see more « Islamist » attacks linked to the greater Middle East and Africa, doubled with « Nazi » attacks linked to Ukraine. We will then discover that al-Qaïda and the Ukrainian Nazis have been connected since their common inception, in 2007 at Ternopol (Ukraine).’

‘The 8th May 2007 (the anniversary of the fall of the German Nazi régime), in Ternopol (West Ukraine), Nazi and Islamist groupuscules created a so-called Anti-Imperialist Front in order to fight against Russia. Organisations from Lithuania, Poland, Ukraine and Russia also participated, including Islamist separatists from Crimea, Adyguea, Dagestan, Ingouchia, Kabardino-Balkaria, Karatchaïevo-Tcherkessia, Ossetia, and Tchetchenia.

Blocked by international sanctions, Dokka Umarov asked for his contribution to be read. The Front is presided by Dmytro Yarosh, who is now an advisor to the Ukrainian Ministry of Defence.’

This is why the Polish government sees no problem with Ukrainian nationalists and extremists is because the main tormentor of Poles was Mykola Lebed, who was highly valued by the CIA.

‘While MI6 and BND worked with Stephan Bandera, the CIA worked with Mykola Lebed since 1950 until the so-called end of the Cold War in 1990. Despite the fact that the CIC (US Army Counterintligence Corps, military counter-intelligence) report of July 1947 Called Lebed a “well-known sadist and collaborator of the Germans.”

Lebed was trained in the center of the Gestapo in Zakopane to be the future Minister of Security.

Both of these individuals are responsible for the mass murder of Polish civilians and are well know as collaborators of Nazi Germany. Being currently worshiped in Ukraine as heroes.

Ukrainian extremists are apparently in very warm relations with the Islamic fundamentalists who may soon have very unpleasant consequences for the citizens of Europe.

Konrad Stachnio is an independent Poland based journalist, he hosted a number of radio and TV programs for the Polish edition of Prison Planet, exclusively for the online magazine “New Eastern Outlook”.
____________