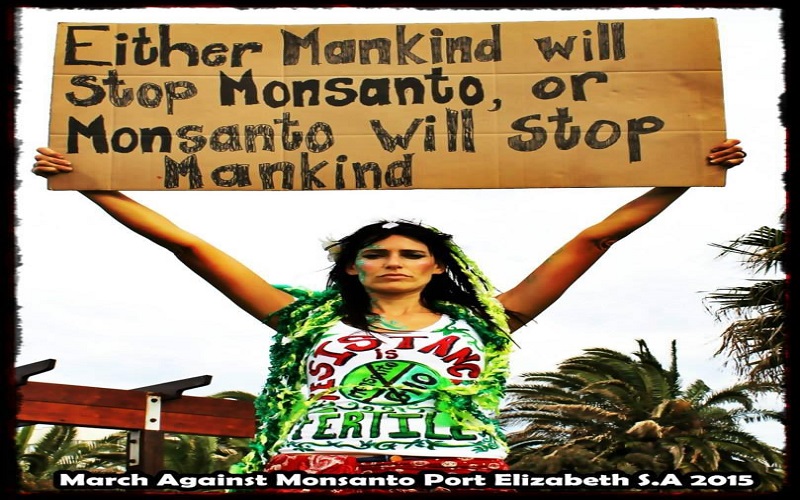 On the 25th of May 2013, the first World Wide March Against Monsanto took place.

It was started by Tami Canal out of sheer frustration and desperation due to the failure of a California ballot to get food products labelled that are made from genetically modified seeds sprayed with a highly toxic and poisonous herbicide containing glyphosate called Roundup.

On February 28th, Tami started a simple Facebook page. This was the first time I became aware of the power of social media and independent media.

The message of one mother in Utah, with ever-growing support from other people who were just as frustrated by the lack of responsibility shown by those who are supposed to act in the public’s best interest, spread like wildfire, not only in Utah and across the USA, but internationally.

By the time of the march, over two million people had become involved in 436 countries. The event was generously covered by Russia Today, with a live feed starting with the first march in Japan, to New Zealand, Australia, Asia, Europe, Africa, Canada, US, South America and finally ending in Hawaii.

Four years later, food products are still not labeled informing people of the contents of the products that they are spending their money on and consuming, or the hazard that these products are to their health.

The full implications and dangers of the patenting of food sources and ultimately food security being taken out of the hands of the world’s farmers and put into the hands of a small group of corporations has not entered the consciousness of mall rats, many of whom seem to think that what they eat is in the same category as the latest cell phone and comes off a 3D printing production line.

Farmers today can be sued for producing their own seed and posing a threat to the hegemonic GMO corporate seed giants. Many organic farmers whose crops have been infested by GMO from a neighbouring farm have been sued for producing GMO that they had never planted in the first place.

One of the few countries who took early action was Hungary who ripped up all their fields and burnt GMO out of their country. A radical step, but now their food products are totally GMO free.

In 2016, South Africa and many other countries around the world will be holding yet another March Against Monsanto. Maybe this time they will be heard.  Rushka Johnson, a leading activist from MAMSA (March Against Monsanto South Africa) has worked tirelessly to get Roundup removed from shelves and yet again will be a leading voice in this year’s March. This is the Press Release from MAMSA.

SOUTH AFRICA – On 21 May 2016, South Africans will once again unite, in numerous cities throughout the country, to protest Monsanto’s aggressive attempts to force genetically modified organisms, or GMOs, and their chemical Herbicides, onto South African consumers and farmers.

The March Against Monsanto, is a part of a global, mass, pro-organic, anti-transgenic GMO campaign being held in over 500 cities worldwide in a bid to spread awareness about the harmful effects of genetically-modified foods, the toxic chemical herbicides that are used with them and the monopoly and ownership of our seeds,  to demand the right to natural medicines and to support and promote small and organic farmers and local food webs.

“The FDA has placed the interest of a handful of biotechnology companies ahead of their responsibility to protect public health. By failing to require testing and labelling of genetically engineered foods, the agency has made consumers unknowing guinea-pigs for potentially harmful, unregulated food substances.”   – Andrew Kimbrell, Executive Director of the International Center for Technology Assessment.

GMOs are organisms whose genetic material have been artificially manipulated in a lab through genetic engineering, creating unstable combinations of genes that do not occur in nature or through traditional crossbreeding methods.  GMO’s are engineered to withstand direct application of herbicide &/or to produce an insecticide.

Despite biotech industry promises, GMOs have not produced increased yield, drought tolerance, enhanced nutrition, or any other consumer benefit, while scientific evidence connects GMO’s with health problems, environmental damage and violation of farmers’ and consumers’ rights.

Now in its fourth year, the March against Monsanto has continued to grow in momentum, as new research highlighting the negative impacts of GMOs and the associated chemicals is emerging.

Most recently the WHO has classified Glyphosate, the active ingredient in Monsanto’s Roundup®, as a Category 2A “Probable Human Carcinogen”.

This is the chemical herbicide used on all Roundup-ready crops, as well as on sports-fields, parks, playgrounds and domestic gardens. It is readily available to all consumers (including children) at retail outlets and family stores.

Amidst rising global concern for human and environmental health, GMO’s are increasingly being banned in many countries, including Russia and China. South Africa remains the ONLY country with a whole GM crop, as it’s the staple diet. There is poison in our pap.

In South Africa, Monsanto controls the majority of the maize seed market and dominates the GM maize market.  There is only one GM maize variety that does not contain a Monsanto owned trait.  Every GM variety sold is either directly by or under license from, Monsanto.

Furthermore, Monsanto controls 60% of that glyphosate market in South Africa.  Its highly toxic herbicide – Roundup® – is used extensively on our food crops and is imposed on farmers who forfeit any right to compensation, in the event of crop failure, if not using Monsanto’s Roundup® brand of glyphosate.

In recent nationwide protests, communities, concerned citizens and environmental activists questioned the selling of Roundup in family stores, without sufficient warning labels or age restrictions, calling for its removal from the shelves.

South Africa is a country where one in four people go hungry, even though the country as a whole is food secure. We find it unacceptable that our government supports a corporatist, profiteering model of food production, spearheaded by Monsanto’s patented GMO seeds, that lends itself solely to large-scale industrialized farming.

Various organizations supporting the March against Monsanto have the following to say:

“We must reverse to progress.

Is meddling with the genetic makeup of our food the answer? Before you say we have been modifying our food sources for decades, let me say yes we have and that is why we have an increase in food intolerances and chronic health issues caused by the way food is produced. For example, 50 years or so ago, wheat contained only five percent gluten, today it has risen to up to 50 percent gluten content. It’s only been since World War II, that wartime chemicals and technologies have found new uses in agriculture.”

“The Traditional & Natural Health Alliance supports the March Against Monsanto Campaign and invites all it’s supporters in the form of natural health product manufacturers, retailers, practitioners and consumers to say No to GMO and toxic agro-chemicals.”

“It is very encouraging to see people taking a stand against Monsanto and demanding a just, nutritious and democratic food system.”

“The damage being done to animals, wildlife and ecosystems by chemical herbicides and pesticides is devastating. TAWI fully supports this campaign and it’s work towards a glyphosate free South Africa”

We demand an end to the food fascism in this country, where people are being force-fed genetically modified foods without their knowledge or consent.

We demand a food system that is just and equitable, which makes food accessible to all people.

We demand an inclusive farming system that recognizes indigenous and local knowledge, as well as age old traditions of seed-saving and sharing.

We demand the democratization of our food systems.

We demand training and support for farmers who are practicing agro-ecological farming.

We demand the right traditional and natural medicines, free from patents.

We demand that the toxic pesticide, Glyphosate be removed from our food crops, in the form of dissication and in conjunction with GM crops

We demand that the herbicide Roundup (and other formulations containing the active ingredient glyphosate), be regulated in family stores , properly labeled (to stipulate the dangers), age restricted and a license required to use it

We demand that the South African Police Service, based on the precautionary  principle, suspend the aerial spraying of Glyphosate based herbicides, as a method of law enforcement in the former Transkei

Living Seeds, Heirloom organic Seed company, has kindly sponsored FREE organic seeds to the participants of the March, to promote home gardens and the importance of protecting and cherishing our seed varieties.

The Dark History of Monsanto
http://www.seattleorganicrestaurants.com/vegan-whole-foods/dark-history-monsanto/