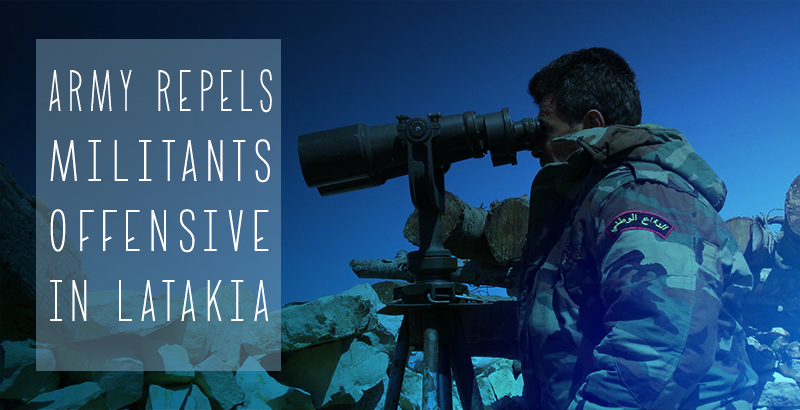 On April 20, ISIS militants launched an ofensive on the militant stronghold of Mar’e. The offensive was supported by VBIEDs attacks. Heavy clashes are ongoing in the town’s suburbs. Mar’e is one the last logistical hubs controled by militants in Northern Aleppo. It’s located south of the Bab Al-Salamiyah border-crossing into Turkey.

Meanwhile, ISIS units successfully advanced in the Deir Ezzor area capturing the al-Sina’ah district and some building blocks in the Industrial Center. The terror groups’ advances came amid the reports that the Syrian government canceled the offensive on Deir Ezzor due to escalation at other fronts.

On April 19, the Syrian military grouping, which remains in the Homs province, conducted an operation in order to liberate the Brigade 550 Base from ISIS. By the situation on April 20, the base is fully secured. This move increased the safety of the recently liberated city of Palmyra.

Abu Omar al-Qashi, a senior field commander of al-Nusra, was killed in intense infighting in the Yarmouk camp in the countryside of Damascus. In turn, ISIS accused al-Nusra of killing three of its fighters, including Abu Dawoud al-Yamani, the terrorists’ commander in the Yarmouk camp. Heavy firefights between Al Nusra and ISIS terrorists have been ongoing in the area since last week.

The SAA and allies have reportedly repelled the militants’ counter-offensive in the Eastern side of Kinsibba in Rweisat al-Malak, Nhashba, Tal Adho and the nearby areas of Akou region. Pro-goverment sources argue that Rweisat al-Malak is under the full control of the army and the terrorist groups faced major casualties.

Iraqi pro-government tribal fighters destroyed 3 ISIS command centers in the al-Zour area in the province of Diyala. Sources said they also seized large amounts of military equipment and ammunition, including rockets. During the past few months, ISIS had been using the al-Zour area as a foothold for attacks against nearby villages and regions.