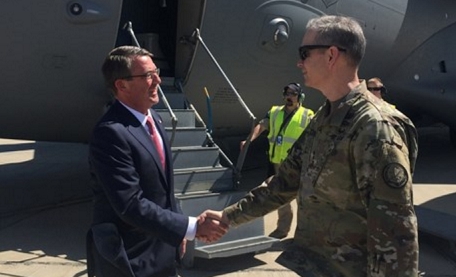 WASHINGTON DC – The next phase of the war against the Islamic State – focusing on Mosul – has been coordinated with Kurdish and Iraqi leaders, US Defense Secretary Ash Carter announced.

A Department of Defense (DoD) statement quoted him as saying that additional US forces, funds and weapons being made available to Kurdish and Iraqi troops are focused on surrounding and recapturing Mosul, the ISIS — or ISIL — headquarters in Iraq since June 2014.

“The next steps in the anti-ISIL fight were authorized by President Barack Obama and coordinated with Haider al-Abadi, Iraqi prime minister, and Masoud Barzani, president of the Iraqi Kurdistan Region and leader of the Kurdistan Democratic Party, as well as other leaders, Carter told the troops,” the DoD statement said.

“First we’re going to place additional advisers with the Iraqi security forces, now down to brigade and battalion headquarters levels. Second, we’re going to make available attack helicopters in support of the (Iraqi forces) and ongoing efforts to envelop and then retake Mosul,” Carter told troops in Baghdad earlier this week.

Praising the Peshmerga as “one of the most effective fighting forces against ISIL,” Carter said that Washington is providing a $415 million package of financial assistance to the Peshmerga in response to a request from the Kurdistan regional government for economic assistance.

But a US official said Tuesday that Washington has actually committed $900 million in financial and material aid to the Kurdish Peshmerga.

Speaking to Rudaw the official, who wished to remain anonymous, said that the US wants to empower the frontlines in the war with ISIS.

The source said that in addition to the $415 million committed to the Peshmerga for the fight for Mosul, two new Peshmerga brigades will be formed, each numbering 2,100 people, with $180 million to $200 million allocated for each.

In addition, “$22.5 million of the US aid will be appointed to train and provide Peshmerga with military equipment,” the source said.

Further funds will be dedicated to operations of special forces, and logistical support including fuel and medical supplies.

“The amount of the aid and how it will be distributed was discussed on March 16, 2016 with Kurdish President Masoud Barzani,” said the source. The first funds are expected to be delivered by the end of April.
Carter said in Baghdad that 217 new troops also would be coming in to Iraq for the new war effort.

During a media briefing in Baghdad, Army Lt. Gen. Sean MacFarland, commander of the Combined Joint Task Force – Operation Inherent Resolve, warned that the fight for Mosul would be different from other battles fought against ISIS in Iraq, such as the retaking of Ramadi in late December.

He noted that Mosul – Iraq’s second-largest city — is four or five times the size of Ramadi and a lot farther away from Iraqi bases that provide logistics support.

“It’s an order of magnitude more challenging than Ramadi was, so obviously we were able to take Ramadi back without the additional enablers. Mosul is going to be more difficult,” the general said.