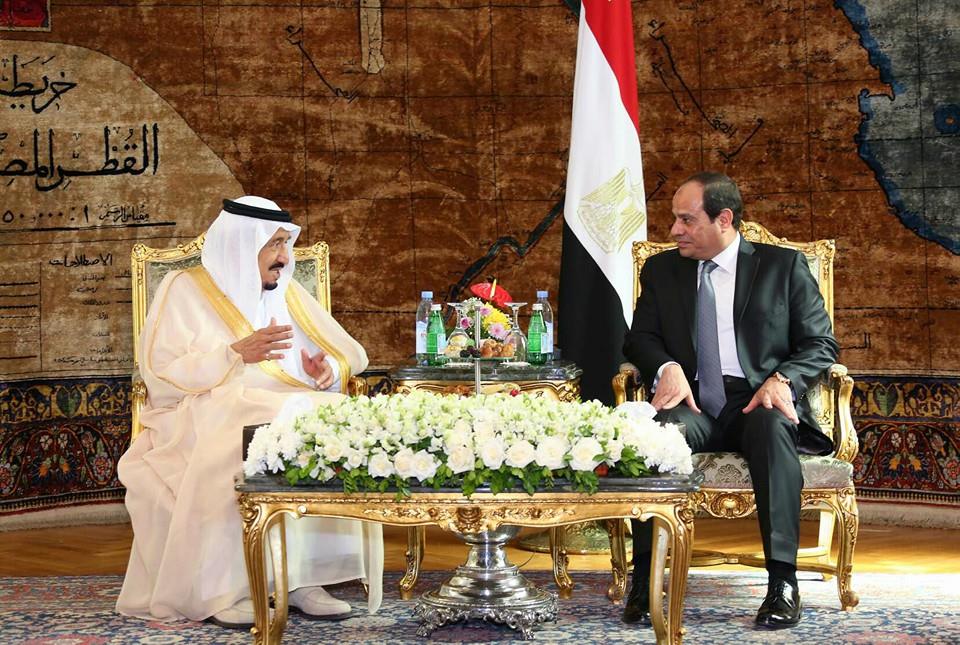 The news on Saudi Arabia’s and Israel’s joint training in Tiran Island [considered the headquarters of the cooperation between Tel Aviv and Riyadh in the Red Sea] sparked the fury of Egyptians who spread the news like fire via social media.

Activists online treated the news as startling disturbance and chatter across the web platforms peaked to its height; they said that the transfer of sovereignty of Tiran and Sanafir islands from Egypt to Saudi Arabia is not something the Egyptians can accept.

Rejecting the handover, Egyptians resorted to documents, historical evidence and even referred to geography schoolbooks that clearly showed this step is abandoning of Egyptian land.

The ironic part of the story, in the opinion of many social media activists, is that the deal was sealed to allow Saudi Arabia conduct its joint training program with the Israeli government, which was exposed by leaks that published the names and ranks of Saudi officers taking part in the training courses.

Mamdouh Hamza, Egyptian professor of soil mechanics and foundations and founder of the Hamza Associates tweeted the news, asking what could be the reaction of the Egyptian President Sisi.

According to a study by the former Egyptian Minister of Social Affairs, Dr. Aisha Rateb, the UN had presented a report that assures Tiran and Sanafir islands belong to Egypt. According to the 1954 UN report concerned with the Egyptian-Israeli rift over the islands, the report’s article no. 60 states that “the islands had been occupied by Egyptians long before the Israeli armed forces advanced to the Gulf of Aqaba a few days after the signature of the Egyptian-Israeli General Armistice Agreement.”

Since the late 1940s, Egypt has been using the two islands as part of its defensive system, and the islands have been used by the naval units who were entrusted in protecting allied shipping in the Red Sea against submarine attacks during the Second World War.

The two islands have been in dispute for decades and they once formed the border between the Ottoman Empire and British-occupied Egypt.

Sisi’s government announced last week that the uninhabited islands will be demarcated as being in Saudi waters. Located at the southern entrance to the Gulf of Aqaba, 200 kilometers south of the Israeli city of Eilat, the two islands will be formally demarcated as being in Saudi waters under a treaty announced on Saturday by Cairo, which has had de facto control over them since 1950.

In the Israeli daily Maariv, journalist Yossi Melman wrote: “The consent that was given by Israel for Egypt to restore sovereignty over two tiny islands, Tiran and Sanafir, to Saudi Arabia is just the tip of the iceberg of the fascinating secret talks that have been held behind the scenes.”

Thousands in the Egyptian capital Cairo have protested the move which seemed to have hurt many Egyptians national pride, sources reported.

“The islands are 100 percent Egyptian, and the documents to prove that are available,” the news source quoted protester Abdullah Ezzat as saying, adding “This is the first time I’ve found someone looking to prove that these islands are not Egyptian.”

Also protesting the decision, the Popular Committee to protect land launched a campaign in rejection to handing over Tiran and Sanafir islands, signing a petition entitled “Egypt is not for sale”.

Both islands at the mouth of the Gulf of Aqaba have a combined area of 113 sqkm and are both 8km from Egypt and Saudi Arabia. The lands of both islands are arid and uncultivated with undiscovered natural resources. The only significance Tiran has is its strategic advantages. It forms the narrowest section of the Straits of Tiran, which is an important passage to the ports of Aqaba in Jordan and Eilat in Israel.